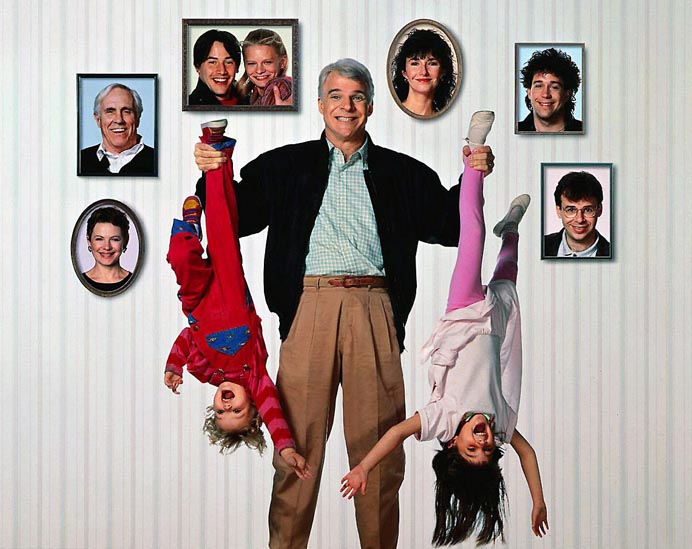 When I was three or four years old, my mom took my infant brother to visit her family in New York and left me in Michigan with my dad for the weekend. While she was away, I was riding my bike and somehow managed to fall over my handle bars and scrape my face on the pavement. I was pretty distraught until my dad gathered me up, gave me ice cream, and put on the movie Parenthood. I calmed down pretty quickly, lulled by sugar and the quiet and familiar drama of family life. I’ve always enjoyed that memory; it’s a perfect vignette of my ideal childhood and the loving father figure who shaped it.

We all grew up bathed in the flickering blue glow of Saturday night movie rentals. These moments are primal, as if the light coming out of our living room windows was telegraphed by our ancestors gathered around their fires. These moments penetrate us deeply and shape our lives—in my case, in a way I never could’ve imagined.

When I turned fourteen, my family fell apart and my world disintegrated around me. My mom stayed physically but left emotionally, and my dad stayed emotionally but left physically. It was all the same to me though—they were both sort of there but still too far away. I felt abandoned, and without an archetypal father or mother, robbed of that which I had built my understanding of the world. There is perhaps no one dumber than a fourteen year old girl, but even then I understood resolutely that my life would never be the same again, that I would never again know the unique, deep warmth of trusting that everything would be okay.

And so, like many other wounded young girls, I looked for a man to placate that emptiness. What I didn’t know, what I couldn’t have known in my adolescent universe, was that someone was looking for me too. Or hunting rather, for a lonely and pliable young girl to manipulate and torture into whatever shape he wanted. So we found one another, a perfect match in a macabre puzzle. He was 20 years older than me, violent, angry, and possessive. I lied incessantly to my friends and family about what was going on and dropped out of high school because I was overwhelmed by his demands. The Lifetime Original Movie really writes itself.

In many ways, however, it was exactly what I was looking for. He was much older and very authoritative, so I tricked myself into believing he filled the void left by my father. At the same time, he was completely helpless and required endless nurturing care, which, through providing, I filled the void my mother left. This duality made the relationship addictive to me. And so I stayed.

I stayed and stayed and stayed and stayed. I left for a weekend, but really I stayed. And then I stayed longer. Through screaming rages, violent outbursts, concerned neighbors, and police at the door, I stayed. Through charges filed and temporary restraining orders, I stayed. Missing teeth, lost friends, fractured ribs. Stayed, stayed, stayed. My mind would have continued to stay indefinitely, but after almost ten years my body just gave up—felled swiftly and surprisingly by a nearly fatal blood infection. I’ll never know really how I acquired it; I had a lot of open wounds in those days.

So I went to the hospital where they gave me lots of drugs. Morphine, Vicodin, Dilaudid, Ambien, Benadryl. I was so high, so far away, both mentally and physically, from my decade long nightmare. I was almost happy—so almost happy that I didn’t even care when the antibiotics that saved my life also gave me nerve damage that rendered me unable to walk within twelve hours of their delivery. I was safe, there was a lot of morphine, and who fucking likes walking anyway, right? I spent two months like that.

But eventually, I went home. Weak and detoxing. Unable to move or even eat. I lived in a reclining chair in front of 60-inch plasma TV while the pieces of my family, altered forever in shape by divorce and remarriage, rallied around me—bonded, as many are, by tragedy. One day, I asked my dad to put the movie Parenthood on for me. And then I watched it five times in a row. For four months straight.

Movies connect us to our collective unconscious by playing out the human experience at a distance that is both tangible and safe. So I watched securely from my Lazy-Boy as Steve Martin and Mary Steenburgen acted out the family I wanted, the family I lost, the family I had been grieving over for the last ten years. I watched them eat dinner, cry, laugh, celebrate birthdays, and all the other small victories and tragedies of a young middle class family. I watched and watched and watched. Days, weeks, and months. I warned visitors that I had to have the movie Parenthood on at all times. I joined the Buckman family, while my own worked tirelessly around me. Preparing ice chips, the only thing I didn’t throw up. Consulting doctor after doctor. Spending untold sums on natural remedies from the internet. Monitoring me 24 hours a day. And I watched Parenthood. I watched Kevin’s little league games, and Gary’s struggles with puberty.

I watched, especially, every scene involving food. Spaghetti and salad for dinner, but a steak for dad. Pizza at the arcade. Nathan and I are power eating—I’ve never felt better. Hostess cupcakes stashed away in the closet. A birthday cake shaped like a cowboy hat. I watched while I choked down ice chips, and my family tried to find anything with nutrients that would not come immediately back up: Pedialyte, Gatorade, baby food, a little bit of broth. I was starving in fact, but watching the Buckman’s eat made me feel a little less hungry.

The frame around a movie, the fact that movies are inside a box, makes them unreal, idyllic representations of life. And who knows if art imitates life or if it’s the other way around. I can probably never explain why Parenthood, specifically, was my movie of choice, but I suspect it was much more than simple nostalgia. I’m not a movie critic, but there’s something in the way the movie feels. There’s an authenticity to the drama that is familiar even if your own family is nothing like the Buckmans. You believe the Buckmans are out there somewhere. The fact that they’re a work of fiction is all the more profound.  And that profundity was never lost on me. For as long as the movie washed over me, depicting a reality I so dearly wanted, I found solace in its fabrication. This family was invented by somebody, with all of their complexity and minutia—the stuff that makes it feel so darn authentic. They’re not just inside a box. Somebody put them in the box. After some IMDb-ing, I found out that it was based on much of Ron Howard’s own experience as a father. Makes sense coming from the guy who made Cocoon and Apollo 13.  I can see the similarities and hear his voice coming through, and that’s kind of neat.

One day, months later, I abruptly stopped watching. I started eating again in small quantities. And I began to notice that what I thought to be lost was actually right in front of me—only in a different form than I had been looking for. A group, a herd, a pack. Not one species, but several. A gaggle of flawed humans and rough edges. A team, ignoring their differences and working diligently to save my life for months on end while fucking Parenthood played on an infinite loop in the background. A family. They were there all along, and I was just too blinded by my own suffering to notice. Four months of Parenthood, of the Buckmans, let me deal unconsciously with the loss of what I had known a family to be, and primed me to finally recognize and accept what had grown in its place. Something messier perhaps, and completely unrecognizable to my younger self, but there when you needed them, there for each other, there for me.

It was then that I finally trusted my dad enough to tell him that my relationship was abusive. Within 24 hours, he spoke to the man and informed him that he would never be contacting me again. And that was it. Just like that, my nightmare ended. Just like that, it seemed again that there really was no problem that couldn’t be solved by watching the right movie—you just maybe had to watch it a couple times in a row, or maybe a couple thousand.

9 thoughts on “How ‘Parenthood’ Saved My Life”