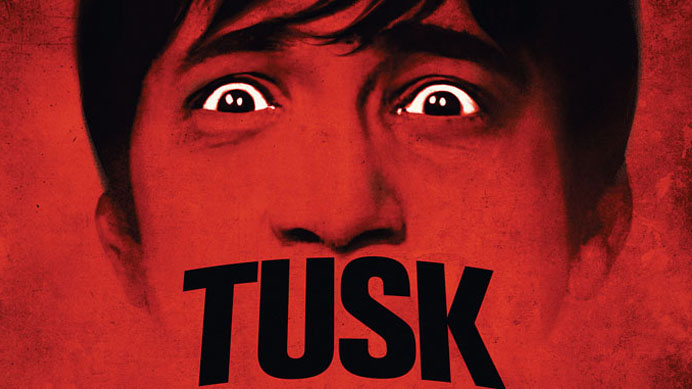 Hey y’all, this is a new series where I talk about movies I couldn’t finish and why. I’m not like Jenna—I don’t think you should Always Finish The Goddamn Movie. To me, if fifteen minutes go by and it hasn’t interested you at all yet, or if somewhere along the way to that fifteen minute mark it commits some sort of unforgivably lame act that makes you wanna abort mission, I say just hit stop and put something else on. No shame in that whatsoever. First of all, you aren’t doing a movie any favors if you force yourself to watch it when you know you’re not in the mood for its vibe. And second, I wholeheartedly believe that there are certain indefensible things a movie can do that can shatter your faith in it completely. And I’m not talking trivial, nitpicky, clickbait-y, CinemaSins style offenses—I’m talking straight up, fuck this movie, we’re done here type shit.

Case in point: the opening scene of Tusk.

Bad CGI takes you out of the film entirely, shattering your trust and your ability to suspend disbelief, and thus, ruining your experience. I Am Legend is probably the best example of this. Practical effects makeup would have made it one one of the best apocalypse films ever made. As it stands though, it’s simply a great hour-long movie with a borderline unwatchable third act tacked onto it, due to Zemeckis-esque humanoids. It’s impossible to sympathize with uncanny valley people.

Tusk contains bad CGI in its very first scene. It opens with Justin Long and Haley Joel Osment’s characters hosting a podcast—actually, wait, that reminds me, there’s another thing that made me want to turn this movie off, but it’s the kinda thing that would only bother me, so it’s not something I’d ever actually turn off a movie over. See if you can guess it, just by looking at the following stills. It’s two things, actually. Spot the two things that would make Cody angry:

If you guessed Justin Long not talking into his microphone whatsoever, and only Justin Long having a pop filter, you’re correct! The microphones they’re using are Heil PR40‘s (the same microphones we use on the Smug Film podcast, by the way) which are highly directional and close proximity, meaning that they really only pick you up if you’re talking into it like Haley is. Which means that, in a real world setting, Justin Long would sound as faint as a church mouse. Plus, pop filters (screens to prevent harsh plosives) are quite necessary for this microphone, since you have to use them so close to your mouth. So it’s quite ironic that Haley is the one who doesn’t have a pop filter, since he’s the only one of the two that would even need it, since it’d be impossible for Justin to pop his P’s, given that his P’s are so far from the mic. Also, one last thing, the pop filter isn’t even angled properly. Anyway, enough broadcasting nerd shit—back to the major offense.

In this scene, they’re discussing a viral video a fan of their show has sent them. They play the video, and it’s a static shot, Star Wars Kid type thing where a nerd is practicing with a samurai sword in his garage. He does some dorky moves, and then this happens:

However bad this CGI looks in stills, trust me, it looks even worse in motion. It looks like Mortal Kombat for the Sega Genesis or something. It looks drawn frame by frame in Photoshop with a computer mouse. And look at the bones! It’s like a goddamn Itchy & Scratchy cartoon. Not to mention the fact that there’s no audio whatsoever. The video itself is silent, with just music over it, ruining any possible visceral reaction to the sound of the slice that might get you to overlook the ridiculous look of it.

Also, the swing doesn’t even make sense that it would cut through his leg. Look at his wind up and follow through—there is no power behind it whatsoever. You can’t cut through the strongest bone in the human body with an underhanded swipe like that, where your wrist is behind your body and cutting upward. It just makes no sense physiologically, even ignoring the bad CGI. Worst case scenario, he’d have a small cut in the back of his leg requiring a couple stitches. More likely than that though, I don’t think the blade would even make it through his jeans.

I was fully expecting Justin and Haley to call bullshit on the video and say it looks fake, and for that to be a plot point or something. Nope. It’s 100% supposed to be real. The movie really expects us to believe this is a thing that has happened. I’m sorry, but I just can’t go on that ride.

Sorry, Kev. I genuinely like most of your films, but sometimes you are just lazy as hell. I don’t understand how you looked at that CGI and thought to yourself, ‘Yeah, that’s done’. Maybe that marijuana you love so much is kind of a double-edge sword, providing you with great ideas such as the premise of Tusk, and horrible ideas such as releasing Tusk as it exists currently.

People get down on George Lucas for constantly fucking with the Star Wars films, updating CGI and tweaking scenes whatnot, and I tend to agree that that’s unnecessary. But ,I do think some filmmakers really should do that from time to time. I’d love to see a version of Tusk with a believable Kill Bill Kid scene. Maybe then I’d actually finish it.