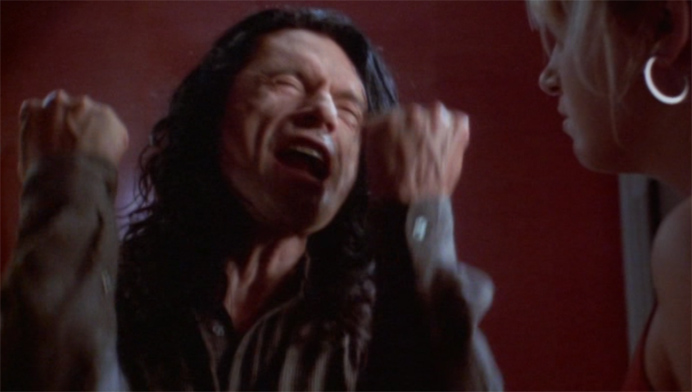 John D’Amico: I think about this a lot.

Pauline Kael’s most famous essay is a celebration of “trash” filmmaking, accurately pointing out the intelligence and rawness hiding behind the sloppiness of the genre. She advocates a kind of good-natured combination of mockery and genuine love, which is an approach also taken by, for example, Rocky Horror and the midnight movie crowd and MST3k, which tended to have a genuine love for the films on view. Your two examples, The Room and Troll 2, both have a nearly hypnotic ineptitude to them, constantly bungled attempts at drama morphing into genuine comedy. I love both films, perhaps not on the terms the filmmakers would hope, but in a sincere, good-natured, and honest way.

But it seems like things have taken a more vicious tack in the past few years. “So bad it’s good” has become a codeword for merely unusual. Rifftrax, the popular successor to MST3k, is poisoned by distasteful bitterness. It places itself arrogantly above the films it discusses, seeming to treat them like reality show contestants, ready to tear every film apart for every transgression against their expectations. This is kind of a general trend in film criticism lately—just look at those horrendous loveless “everything wrong with X movie in 3 minutes” YouTube videos. It was the source of my contention with Greg’s piece a few months back, and I still bicker with Cody and other critics about it from time to time. Weirdness should be celebrated in filmmaking, but more often than not it’s brushed off with thoughtless and ghettoizing contempt. It’s a very adolescent attitude, the tiresome smugness of a high school sophomore calling his classmates “sheeple.”

A few months back I talked about this at length in a commentary track for The Amazing Transparent Man, a film which I feel was rejected by audiences because its combination of raw anger and low-budget sci-fi trappings unsettled people. Audiences, particularly on the internet, have a bad habit of punishing films for surprising them.

This is the attitude that doomed Battleship before it even hit theaters—it was derided in all corners as a dumb cash-in—but in fact it was a fun, quirky, and genuinely SMART film (despite being about a half hour too long). Meanwhile, films like the ponderous Inception get constant credit for intelligence that, frankly, is not there. Nolan’s film was nothing but a well-made technical exercise, a long-form screensaver that was celebrated for validating audience expectations, not defying them. Hold that against the manic opera of Battleship, in which they drifted the USS Arizona and threw our expectations of alien evil in our faces. Or throw it back a few years to Armageddon, which is constantly dragged out as the worst and dumbest film in the Criterion collection. It’s a bad drama, sure, but it’s a tremendously fun comedy and of course it is—it’s a Coen brothers supporting cast in a space adventure! But because people expect a Serious Sci-Fi Drama (whatever the hell that is) they dismiss Armageddon as “dumb” even though they may have the time of their life with the quirky comedy in front of them. “So bad it’s good” in this context seems to simply mean “not what I expected.”

That’s an unfulfilling perspective to my eyes, one that locks people into a sort of permanent artistic adolescence. I feel genuinely bad for film fans who can’t look past poor production values or dated framing to appreciate the genuine artistry and rawness at the heart of many, many films which today are regarded as merely “so bad they’re good.”

So in a roundabout ramble way, I return to your original question, a good one:
Do ‘so bad it’s good’ movies, e.g., The Room or Troll 2, represent an ultimate artistic triumph, or a complete failure?

But in a larger sense, I think it’s a tricky term, one I’m not fully comfortable with. It’s a weapon, one that can be used to neuter films like Kitten with a Whip, which confront the audience with sexual truths best left hidden, or Roger Corman’s Gunslinger, which probes gender inequality and the universal shame of violence. Or what of the sequels to The Creature from the Black Lagoon—they’re as ballsy and unique as any films I’m aware of. They’re betrayed by their low budgets, but despite that, both films, especially the third, have moments of real anguish and absurd, almost medieval power. I pick those examples because they’re all films featured prominently in some very funny episodes of MST3k. I laugh at (with?) them in the context of Joel and the Bots, but stripped of that distance, one-on-one in front of me, I can’t deny their strangeness and power.

For the sake of, uh, whatever, here are some films I consider good-to-great which were covered on that show: The Amazing Transparent Man, Phase IV, The Legend of Dinosaurs, Revenge of the Creature, Kitten with a Whip, Gunslinger, The Incredible Melting Man, The Green Slime, This Island Earth, Danger: Diabolik, Rocketship X-M.