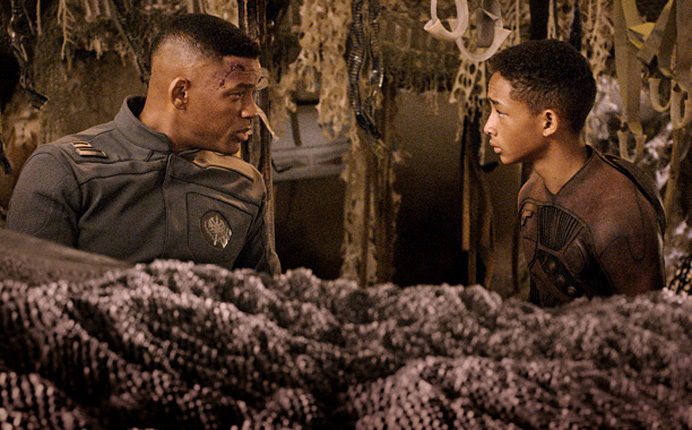 Tommy Lee Jones once said that the secret to being funny is standing next to Will Smith.  Like any leading man, Smith is classically handsome, cut from steel, infinitely charming, and possesses an inexplicable charisma that glues your eyes to him.  His son does not.  Jaden Smith’s eyes are like Vin Diesel’s—boring and lifeless.  And his acting is about ten billion times worse.

You all know how I feel about Signs by now, but I’m into reiteration—Signs is the best movie ever made.  So I feel bad for Shyamalan.  The guy really can’t catch a break.  He gets hired by one of the biggest movie stars of all time to direct him in a high concept action sci-fi movie.  What a compliment!  The only caveat is it has to star his son.  Will Smith loves his kids so much that he encourages them to be entertainers despite their lack of chops.  And for some reason he’s determined that his son Jaden follow in his footsteps.  Good luck.

This doesn’t need to be a very long review, because After Earth is such a fucking train wreck that talking about it for too long would be a waste of time and energy.

I love voiceover.  Everything your stupid ass writing teacher in film school told you was wrong—voiceover is effective and beautiful.  Look no further than the opening sequences of Raising Arizona and Field of Dreams.  However, after After Earth, I’m starting to agree.

There are two major problems with the voiceover in this movie. One, it’s wholly unnecessary.  The movie could’ve just started with the crash.  We didn’t need to know anything at all in the opening voiceover or the clunky expository scenes that followed.  Learning all of that stuff along the way—you know, the way Shyamalan does it in his own scripts, aka, the right way—would be a lot more fun and interesting.  Two, Jaden’s voice and enunciation sound like a caricature of a South Park character.  Worst voiceover of all time.  And that’s how the movie begins.

From the word go, it’s inept city.  Everything from the wardrobe to the editing to the score is uninspired and generic.  Coming from a craftsman such as Shyamalan, it’s very bizarre to hear the same fucking music cues we’ve heard in every movie for the last ten years.  What’s more puzzling is they seem to be placed randomly, without feeling or any sense of rhythmic storytelling, as if the assembly line making the movie was broken.

Then, there’s the dialogue.  Fuck, man.  I suspect that Will Smith wanted to cast himself against type.  Big mistake, dude.  A humorless Will Smith is a worthless one.  I also think the characters are using some kind of weird accent, but it’s hard to tell—it could just be clunky enunciations as the actors try desperately to make sense of how to deliver the stilted dialogue.

The premise is fine. It’s a rite of passage quest and a father-son story.  It’s like Star Wars meets Field of Dreams—except it plays out like The Room meets Troll 2.  It really is that bad.  Sometimes the green screen keying is as bad as the roof scene in The Room, and the logic and performances are Troll 2 all the way.

According to the IMDb trivia, the original script was a grounded story about a car accident in the woods, with the same premise.  For whatever reason, it was refashioned into a spaceship crashing on future earth. The simple ‘car in the woods’ version would’ve been better and more grounded.  In any event, the story, as is, is nauseatingly predictable.  I normally don’t mind predictability, because all good stories should follow a logical path from point A to B to C, but in this case, the story was such trite, formulaic garbage that it makes me understand why people hate on that shit.

There probably is a good movie in here somewhere, but extracting it would require a complete overhaul.  And it’s not that Shyamalan dropped the ball—he just was never passed one in the first place.  Any chance at him being able to exhibit his visual prowess was neutered by a bland, dead-on-arrival script.  It’s ironic that a movie with so much supposed scope is so claustrophobic (with, for instance, all of Will’s scenes happening in a dreary control room).  Designing interesting shots must’ve been an uphill battle.

I normally don’t like to focus on the rules purported by sci-fi movies.  Movies require suspension of disbelief, and if it’s a good movie, I’ll buy into some dumb space rules.  But in this case, the logic was so dreadful that I couldn’t help but question every decision.  Like, if it’s the future, and they have a little handheld device that shows you a hologram graphic of the inside of your leg projected over your own leg, why don’t they have breathing masks, and hell, projectile weapons?  If we learned anything from Indiana Jones, it’s that a gun works better in a pinch than a sword.

Everything about After Earth is wrong.  It’s so lazily constructed that the sound design, an area that Shyamalan usually thrives, seemed to be missing elements.  It’s the future and we’re on a spaceship—gimme some fuckin’ room tone, man.  And why didn’t Will need to use those breathing capsule things?  He was on earth too.  I guess because he was in the spaceship.  Whatever, fuck it.

Whether you like Shyamalan or not, you can’t deny his ability to create tension and big scares.  After Earth’s attempts at this are laughable at best.  An early scene has Jaden slowly approaching some kind of alien monster-y thing in a cocoon or something.  The scare is so obvious that when it comes it plays like a joke beat rather than a terrifying moment.  Compare this to the sequence in Signs when the aliens are outside the house and the camera simply pans the walls, using the soundtrack to send chills down your spine.  Less is more, and in Signs, Shyamalan milks every shot for its tension potential.  In After Earth, he was asleep at the switch.

The real bummer here is that Shyamalan works hard and he’s a passionate guy.  Go read The Man Who Heard Voices and you’ll see what I mean.  I’m sure he put his heart into this thing and wanted to make Will happy.  And I’m sure all you assholes will blame ‘Shamalamadingdong’ for this and not the Smiths, even though it’s his story, he produced it, put the team together, and hired Night.  There’s only so much film in existence—and there ain’t enough to get a good line reading out of Jaden.

Oh, and one more thing—there’s a scene where a giant future eagle saves Jaden’s life by dragging him into a cubby hole it dug in the ground for him.  The eagle saved his life because it somehow knew Jaden tried to save its babies lives, even though it couldn’t have possibly seen him doing that, because it was happening through a nest wall.  Plus, it’s a bird, and probably wouldn’t get what was happening, or remember.  Oh, also, the bird saves Jaden’s life from some weird thing where the ground and foliage just start freezing for no reason.  Like really fast.  It’s like that scene in The Day After Tomorrow when they’re literally running away from the global warming and close the door behind them to evade it.  I know its probably some like future earth thing, like in the future it gets colder faster at night or something, but dude, fuck you.  No.

7 thoughts on “After Earth: Blame Smith, Not Shyamalan”