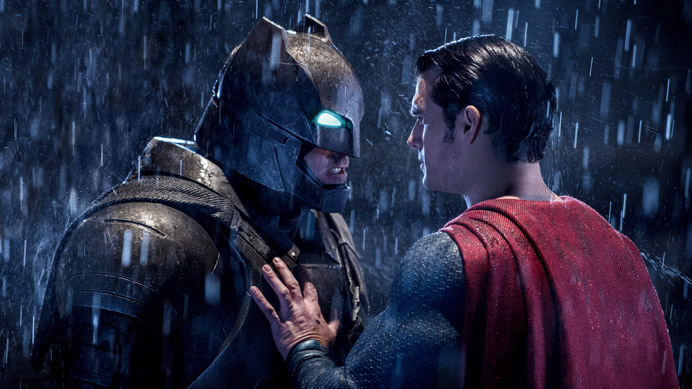 Although certainly inherently philistinic, rarely is popular opinion more philistinic—at least within the medium of film—than when it comes to superhero movies. With most genres, the ones that pull 90% or higher on Rotten Tomatoes are usually pretty damn good, even if you’re not a particular fan of the genre. But with superhero movies, nearly all of those are damn-near unwatchable by eyes that seek and understand art. You have to get quite low in the percentage to start seeing some artistic brilliance emerge—The Rocketeer (61%), Hulk (61%), Blade (54%), The Phantom (41%), Punisher: War Zone (27%), Blankman (13%), to name a few that do some wonderful, genre-transcending and artistically-significant things. Granted, there are exceptions to this rule—Iron Man truly is great—but in general, if you want art from a superhero movie, you gotta look in the bargain bin.

I do believe Batman v Superman is destined for the bargain bin eventually, but it is most certainly not a film to be mined for overlooked genius. If it is ever to be re-explored, said re-exploring should be done simply to study what not to do—with particular focus on exactly how much what-no-to-do can be packed into a single movie. It’d take more time to unpack every single thing wrong with this stinker than I’m willing to give it right now (I’m still reeling, chasing its throat burn with as much soothing 60’s Batman as I can watch) so here are just a mere few of my stickiest sticking points:

Kinda takes the bite out of it, doesn’t it? Were the film called this, I don’t think it would have garnered near as much interest. ‘Batman v Superman’ sounds epic—a showdown of ‘King Kong vs. Godzilla’-esque proportions. Bruce Wayne v Clark Kent sounds like two men disagreeing, possibly in court. Not exactly tentpole-release fare. Yet, this is how Batman and Superman spend the majority of their time leading up to their in-costume battle: as normally-attired grown men with chips on their shoulder, in desperate need of a woman with a ruler to come in and settle, once and for all, who’s packing more heat.

What’s worse is that their grievances with each other are dumb—so dumb, in fact, that in order for their beef to make any plausible sense at all, one can only assume that they are dumb themselves. Writing tip: If you have to drastically reduce the implied IQ’s of your characters in order to get them to do what your story needs them to do, then the story needs work. Tool that, not their brains.

My hunch is that the studio wanted this to be a wholly new Batman v Superman story, with no direct drawing from any of the many times Batman and Superman have fought before in the comics. The problem with that is that the best minds in comics have been wracking their brain for great reasons for Batman and Superman to fight for sixty years. If there’s a clever way for the showdown to occur, they’ve thought of it and done it. And so, in this film, we’re left with a concept tons of comic book writers have probably thought of before, realized was dumb, and didn’t do. (And for a comic book writer to not do an idea, that’s saying a lot.) 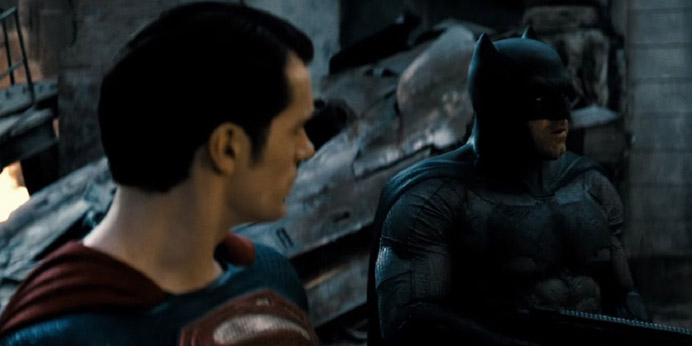 Batman v Superman, Until Batman & Superman v Someone Else

Not only is the entire reason why they fight dumb, them fighting isn’t even the climax of the film—it’s a rumble-and-tumble midway into the bloated-runtime affair that makes the internal movie clock in your brain think it’s almost over soon, but no, you’ve got an entire movie’s length of movie left. Batman and Superman realize their misunderstanding, stop fighting, and patch shit up. Then some filler stuff happens, a big boss shows up, and then they fight the big boss together.

Why wasn’t the second half an entirely other movie? Are we packing sequels right into the first film now? It should’ve been two movies, and they coulda called the sequel ‘Batman & Superman’, bam, done. Hire me, Hollywood.

And of course, I don’t mean the film should’ve literally been split in half and released as two parts. What I’m saying is, at the scriptwriting stage, the plots they wanted to handle should’ve been plotted out into two separate movies, giving them more time and focus to strengthen the plausibility and storytelling of both plots. As it stands now, it’s like they tried to cook two different main courses in one pot like some moronic bachelor, or the Epic Meal Time guys. 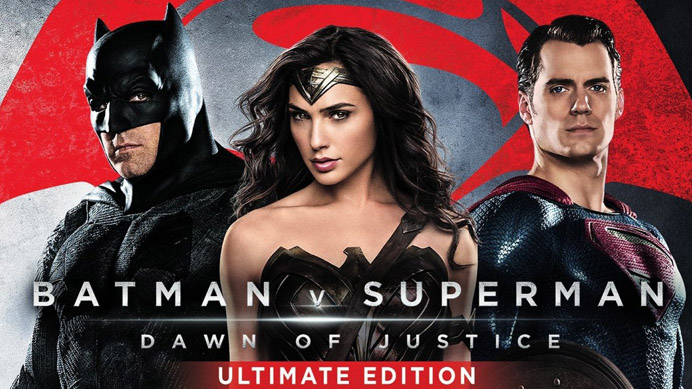 The cover of this thing, with Wonder Woman front and center, literally in front of Batman and Superman, leads those going into it to assume that she will essentially be a third protagonist—maybe not a part of their showdown, but perhaps central to it, and certainly somewhat evenly distributed amongst the total film’s runtime. Turns out she’s in it only seven minutes total.

To call her a side character would be an insult to all the actual side characters in the film that have way more runtime and lines, and are infinitely less interesting. If I were to term her as anything, I’d say that she’s this film’s Boba Fett—so instantly cool and captivating that you can’t understand for the life of you why she’s so perpetually here-and-then-gone. And what’s worse is that her theme song in the film that plays whenever she shows up is ridiculously good. Whenever you hear it, you’re like, ‘oh shit, shit’s about to go down’. And each time, nothing.

Piss-poor line readings aside (everyone sucks in this movie, so I blame the dialogue and direction, not her) she’s a beacon of light in an otherwise dull and often unparseable affair.

I don’t understand this movie. And that does not make me dumb, or mean that I wasn’t paying good enough attention—this is simply a movie that is impossible to understand. Not only does the plot of course take leaps in logic due to the inherent difficulties that lie in getting the bat and the supes to throw down, but it is forever circling themes and concepts, poking at them from afar but never actually exploring them. This movie has absolutely nothing actual to say about God, or Man, yet you will hear those words a lot watching it—much in the same way that spam sneaks in certain key words into otherwise meaningless blocks of text in order to get past spam filters.

Skimming this script, I’m sure studio heads assumed it had the depth they no doubt required it to have, wanting it to be deep like The Dark Knight is (or rather, allegedly is—no one has been able to prove it) so that they could make The Dark Knight bucks. Actually watching it though—forced to read it front to back, essentially—is like scrolling through a @DeepSuperheroMovie_Ebooks Twitter feed: just unfinished thought after unfinished thought after unfinished thought. Each character speaks seemingly as part of a hive mind that can only spout callow, faux-smart ramblings unfit for even a DeadJournal. To make one more apt-as-fuck comparison, it’s as though Fred Armisen’s Weekend Update character Nicholas Fehn wrote a superhero movie.

I’m all for superhero movies ‘having something to say’, but I like them to actually have something to say. Far too often, ones that allegedly do, don’t, but get away scot free as though they do, simply by implying so strongly that they do. It’s a significant victory that Batman v Superman has been called out as hard as it has for its vapidity. 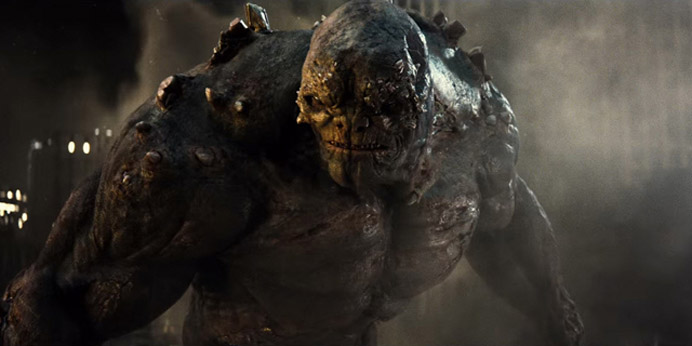 The Effects Are Vapid Too

You’ve seen the big boss before. He’s the same CGI ogre that’s been in every movie with a CGI ogre in it in the last ten years. He should damn near have an IMDb page at this point. I wouldn’t be surprised if he has an agent.

Lastly, part of the fun of superhero movies is seeing the way the superhero’s surroundings are portrayed—one of my favorites being the Ayn Rand wet dream that is Gotham in Batman & Robin, where skyscrapers and giant statues overlap in an M.C. Escher-esque cacophony of excess. And that was done with actual manpower and constructing of set pieces—tons of time and energy and elbow grease. So it doesn’t make sense that, in 2016, with the ability to create photorealistic CGI backgrounds at our disposal, we should ever have to look at boring surroundings in one of these films. And yet, Gotham and Metropolis here are such that I would never want to visit them. I’d sooner vacation in Superman 64. 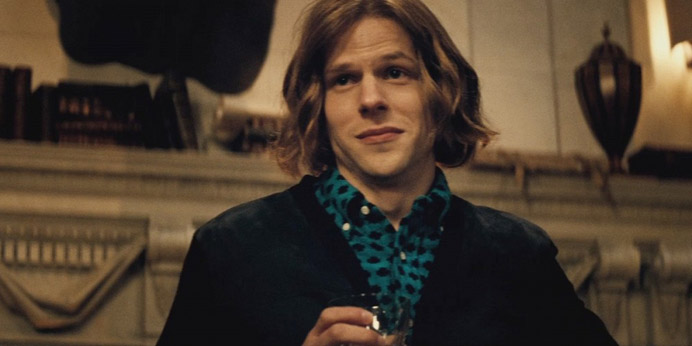 What’s Worse Is I Haven’t Even Scratched The Surface

There are countless valid gripes about Batman v Superman all over the internet already, and I’m sure there will be tons more now that it’s out on Blu-Ray and all the people intelligent enough to skip it in theaters will finally be able to root around in its ineptitude. These are just the peeves of mine that have been bubbling to the surface of my mind most bubblingly—ones that, as far as I know, haven’t been brought-up-to-death elsewhere.

I’m sure more will be begging to be released through my fingertips at a later date. Until then, I’ll be enjoying all the legitimately good Batman and Superman films and TV out there, desperately reminding myself that the superhero genre can be done right. Maybe I’ll give Superman IV: The Quest for Peace a whirl. 12% with critics, 16% with audiences—ooh, and 90 minutes long! Certainly sounds good to me.