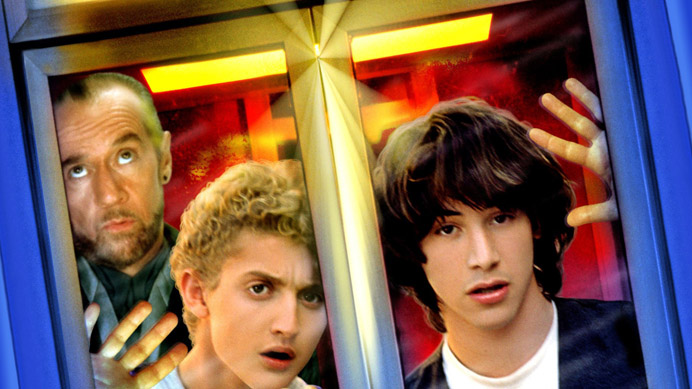 Bill and Ted’s Excellent Adventure is almost perfect.  It’s very original, the characters are cleverly constructed, there are some cool visuals, the ride is a lot of fun, and there’s even a few touching moments.  But it’s missing a certain fundamental piece of storytelling, the absence of which prevents it from being transcendent.  Instead, it’s merely a bonafide classic (which is still pretty damned good).

Bill and Ted is about friendship.  Like Dumb and Dumber, Planes Trains and Automobiles, American Movie, and Tremors, it’s a story about two friends that embark on a crazy adventure that teaches them why they need each other.  These kinds of stories (buddy movies) begin with two characters as best buds put in a put-upon situation.  In Dumb and Dumber, Harry and Lloyd’s pets’ heads are falling off, and that’s a pretty big problem.  So, to fix their situation, they decide to embark on a journey.  Said journey contains obstacles that the two heroes must face together, and by doing so, they learn why they’re friends in the first place.

However, in order for that to happen, they have to be pushed apart by the journey, its obstacles driving a wedge between them.  Remember when Lloyd pours the Ex-Lax in Harry’s tea?  He does this because by that point in the story, they’re at odds.

What keeps Bill and Ted from being truly great is that nobody ever pours any Ex-Lax.  They always love each other.  All of their obstacles are wholly external, and in the end, they’re right back where they started.

Not only does the movie have this glaring flaw, it also has a bizarre, underdone subplot about Bill’s mom being young and hot.  The idea never goes anywhere beyond that—she’s just hot and went to high school with Bill and Ted.  It’s completely unimportant and doesn’t have anything to do with the story whatsoever.

It’s a shame about these obvious blunders, because the movie is so well made in other ways.  Bill and Ted are great characters—their specific lexicon is wielded with genius ease by Winter and Reeves, who play off of each other brilliantly.  There’s a lot of intelligence in the performances.  So much so that they duped an entire sect of culture into thinking they were actually burn-out losers in real life.  There’s really no greater compliment an actor can receive.

My favorite moment in the entire movie is when Bill tells Billy the Kid, “Billy, you are dealing with the oddity of time travel with the greatest of ease!”  This is one of the most layered jokes in the history of jokes.

Bill’s sudden adeptness at language is a surprise, but actually makes sense, since he and Ted have a very esoteric lexicon (as most friends do) and they routinely say things like “most triumphant”.  So for Bill to throw out a word like ‘oddity’, and a sentence like this, is only surprising on the surface. The logic behind it coming out of his mouth is sound, making the surprise welcome.

There’s truth in Bill’s statement, but the funny thing is, Bill is somehow the purveyor of said time travel, as the de-facto chaperone through time, and since Bill and Ted are the ones snatching these historical figures up, their captives assume they are in control, and that there’s a natural hierarchy. But Bill and Ted have as little an idea of what’s going on as they do.  Therefore, Bill is really in no position to make such a statement.  Bill and Ted handle time travel with the greatest of ease themselves, but only because they are aloof burnouts, unable to comprehend the total insanity of their situation.

Lastly, there is a beautiful, genuine sincerity to Bill’s statement.  It’s in the line itself, but more so in the delivery, which is pitch perfect.  Bill really does think Billy the Kid is handling the oddity of travel with the greatest of ease, and he wants to tell him, and does so out of pure, condescension-free pride.  He’s happy about the situation.  It’s just a nice moment.  And beyond that, the line itself simply makes you aware of how ridiculous the situation is, which is fun, because fun things are happening!

But anyway, Bill and Ted solve their problems, Ted avoids Alaskan military school, and we are left believing that Rufus will teach them how to be most triumphant guitar players.  But those aren’t changes.  Bill and Ted don’t really learn anything about each other, or themselves—or really anything about history either.  Their report is basically just historical figures talking about San Dimas.  And if you were in the audience for that report, you’d just assume these were actors in costumes, which makes the actual presentation even more shallow.

But whatever, this move is still way better than all the shit they make nowadays.  At least they tried.  Also, we all know how underrated and great Keanu Reeves is, but if you haven’t, check out Alex Winter’s work.  He’s actually a great director.  He made a cult classic called Freaked (keep an eye out for the Reeves cameo) and on the DVD for it, you’ll find his NYU student films, which are fucking amazing.  And he recently made a documentary about Napster, which was most excellent.