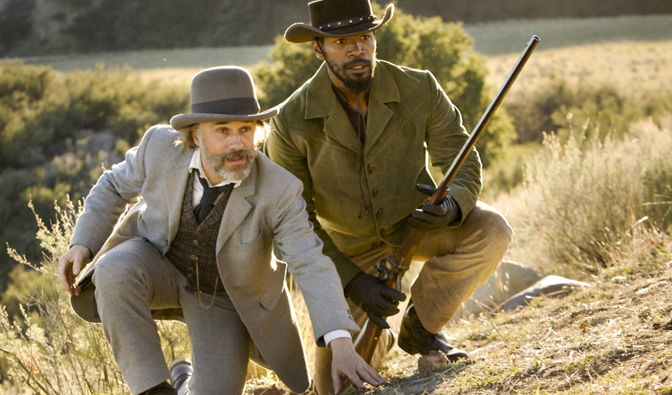 Look, I’m not saying that Django Unchained is a bad movie. Or that Pulp Fiction is either. They’re both good movies. Tarantino has never made a bad movie. The good parts of any one of his films always seem to outweigh the bad—the two with the strongest good-to-bad-part ratios being Inglourious Basterds and Jackie Brown. Those two are damn near perfect. All the others are either ‘very good’ (Kill Bill Vol. 1 and 2, From Dusk Till Dawn, True Romance) or just ‘good’ (Reservoir Dogs, Pulp Fiction, Death Proof, Django Unchained). And Death Proof is a bit more solid than Django in my opinion, therefore, Django is his worst since Pulp Fiction. (By the way, I should point out that yes, I’m fully aware that Tarantino wrote, but did not direct, From Dusk Till Dawn and True Romance. If I don’t mention that, some fanboy will point it out in the comments like he knows something I don’t or whatever. Well guess what, hypothetical fanboy? You know nothing I don’t. So you can take that hypothetical fact and shove it. Although, and I don’t wanna get off on a tangent here, but isn’t it weird how often people fall for that ‘Quentin Tarantino Presents’ thing? There are people in this world that legit think Tarantino was involved in the writing or directing or whatever of The Protector, Hostel, and others. Swear to god. I worked a video store, dude. I know things. And that’s honestly the tip of the iceberg as far as ‘weird things customers think’ goes. I’ll have to do an entry or entries about my video store days one of these days…)

But back to the business at hand—Django Unchained and what’s wrong with it. Basically, the whole thing with Tarantino is that he makes the same types of mistakes in all his movies. So much so that they’re damn near ‘stylistic choices’. (But really, they’re just mistakes.) And so, to talk about the problems of any one of his movies is to talk about the problems of just about all his movies. Which is nice for me as a critic, because it means I don’t really ever have to review another Tarantino film, since after this one I’m sure you’ll be able to figure out the parts I dislike from his other stuff. So this will be a whole lot of birds with one stone. (Thanks, Tarantino!)

First off, the God Damn Pacing is Off

Really his biggest weakness as a filmmaker is when it comes to pacing. He pretty much sucks at pacing his films. And I’m pretty sure he takes pride in his awkward pacing, and thinks it makes his movies more ‘interesting’ and more like a novel or a miniseries or something, but really it just makes them frustrating. Because when it comes to individual scenes, he’s actually quite great at pacing. (The opening scene of Basterds in particular is a goddamn masterpiece.) I suspect that his process is that he treats each scene like he has all the time in the world, and almost as though each is its own short film—and that’s fine and all, whatever helps you write, dude—but when you’re sitting there in the editing room, that’s when it’s time to see which scenes work great as long as you intended, and which ones could work better shorter. A good writer-director treats the editing process like another draft of the script. Kevin Smith said that once, in one of his Q&A DVD’s—which is funny, because god damn does that boy suck at editing too—but the sentiment is very much correct. Editing is about refining, tightening. It’s impossible to know exactly how something is going to play out on camera before you’ve shot it. Sometimes a slight glance by an actress is so unexpectedly evocative that you can do away with a whole page or two of dialogue that, if left in, would just be redundant.

So, what could’ve been trimmed in Django? A whole lot. I could’ve easily gotten this movie under two hours, and it would’ve been much better for it. For instance, that whole long sequence of them traveling with Candie to Candieland—what the fuck was that all about? That dragged on forever, and not in a good, suspenseful way. All those repetitive ‘wow Django is doing good at appearing to be a badass Mandingo specialist’ bits. We get it. We don’t need all of those. And the dogs attacking the slave bit went on too long too, and wasn’t even paid off well later in the film. And speaking of not paid off well—that Mandingo fighting scene had zero payoff, and was begging for some. We saw this great, raw, fucked up fight, setting up the badass-ness of these Mandingo fighters, for no real reason other than to get a sense of what Mandingo fighting ‘is’, I guess. But the fighter that wins in that scene is so god damn instantly captivating in just the brief moment where we see him breathing heavy after the fight ends, that it’s a real shame he’s not back later on, having a brutal showdown of sorts with Django. With so much time devoted the dog scene and  the Mandingo fight, you’d think that stuff would have figured into the climax or resolution in some way, but nope. And as such, Tarantino should’ve trimmed those scenes down a bit. (But really he should’ve just written the damn script better in the first place.)

A lot of it is pretty solid, but you can’t fucking tell me that third act wasn’t fundamentally flawed as hell.  Look, I loved the shoot out. The shoot out was great. But then after that, the movie suddenly goes limp—and then it tries to get hard again, but can only muster up a semi for the second climax. (Why the fuck would anyone in their right mind write two climaxes?) It’s a damn shame, because I was really digging that first climax. God damn was all that blood orgasmic and visceral. I shit you not, it almost brought a tear to my eye. Not because of anything to do with the story, even—just because while I was watching that scene I could feel so strongly how much Tarantino loves movies. He fucking loves them, dude. They’re his favorite thing in the world. And his visceral action scenes are such a firework expression of that love that you can’t help but love them with all your heart with him, no matter what you may think about violence in films, or violence in general. It’s like watching Pollack paint. Tarantino adores his canvas, and if you can’t vicariously feel that, you’re lying to yourself and others.

Basically, that shootout climax should have been the actual climax, and then there should have a been an actual resolution right after that. He shouldn’t have dragged things out with that scene with the Australians and the other stuff. Totally unnecessary and mood-killing and lukewarmifying. (Ain’t that a good word? I just came up with it.) He should have also finished fleshing out the relationship between Candie and Stephen. I can see where he was going with it, but it’s a little too bare. Their roles aren’t clear enough. It’s like he had the opportunity to set up this wonderful two heroes, two villains thing, but then didn’t fully express the dynamic of the latter pair. We get more than enough character development for our main guys (way more than enough, actually) but just slapdash shit for their foes. Damn shame.

And would it have killed him to have given any of the women in the movie something to do? I don’t have a feminist bone in my body (the only ‘minority’ or ‘group’ I root for is the smallest one in the world—the individual) but come on, write a thing. Something. Anything. You’re good at it. You and Woody Allen are like the two best American male writer-directors working today when it comes to writing for women. Such a shame. Pure laziness. And speaking of laziness:

Most of the Sets are Lazy as Hell

The only times I felt truly immersed in the film was during the interiors at the Mandingo fight place, and at Candieland. (And I guess, maybe the place where they had beer in the beginning of the film, too.) Everything else just felt way too bare. Which is so weird for Tarantino, because he had a great streak going. Inglourious Basterds and Death Proof and the Kill Bills were all perfectly immersive. Basterds, in particular. (God damn was I transported by that one.) But this one, not so much. All the exteriors just weren’t well thought out enough. They felt cheap. And exteriors should never feel ‘cheap’. That’s like the weirdest thing ever for an exterior to feel like. But that’s what they felt like to me. Cheap. (Just like Tarantino’s acting.)

Tarantino is in the Thing

The only time I’ve ever liked Tarantino in stuff is when he wasn’t directing himself. I love him in From Dusk Till Dawn, and I like his cameo in Planet Terror, too. But without someone telling him when his line readings are shit, the man just can’t deliver a single thing convincingly, and it really takes you out of the movie. In fact, his cameo in Django may be his worst yet. I mean, come on. That shitty fucking accent? How the hell did he think he’d be able to pull that off? And how the hell did nobody tap him on the shoulder and be all ‘dude, this shit ain’t working, give someone else the gig, like, maybe, I dunno, an actual actor, preferably an Australian one’? Oh that’s right, because he’s Quentin fucking Tarantino, and since we all love it when he slam dunks like Michael Jordan, we pretend not to see it when he strikes out like Michael Jordan.

You know, M. Night Shyamalan gets a lot of hate (most of it unjust—I’ll be  defending the fuck out of The Happening in an upcoming review) but one thing you can’t say about him is that he ruins his films by being in them. Every one of his cameos, I’ve liked. He’s a competent actor. Doesn’t ham it up, knows how to deliver a line, and really holds his own against who he’s acting opposite. If you didn’t know he was the writer-director, you wouldn’t know he was the writer-director. His scene in Signs in particular is wonderful.

And So, In Conclusion

Django Unchained is a good movie. I definitely recommend it. Despite all its problems, it really does hit more than it misses. The acting is solid, the dialogue sings, and there are a lot of fun parts. You’ll have a really nice time at the movies. But I don’t see myself revisiting this one anytime soon, whereas when it comes to Jackie Brown and Basterds, I could watch those any day of the week. Such wonderful fucking movies. Yet for some reason, only Basterds seems to get love. Jackie Brown gets neglected like crazy. Very strange. I think it’s because after Pulp Fiction, audiences wanted something that was essentially Pulp Fiction II, and instead he gave us an insanely mature work which solidified him as not a mere flash in the pan, but a serious cinematic force to be reckoned with. Here’s hoping people revisit that one without bias, because it’s really something.