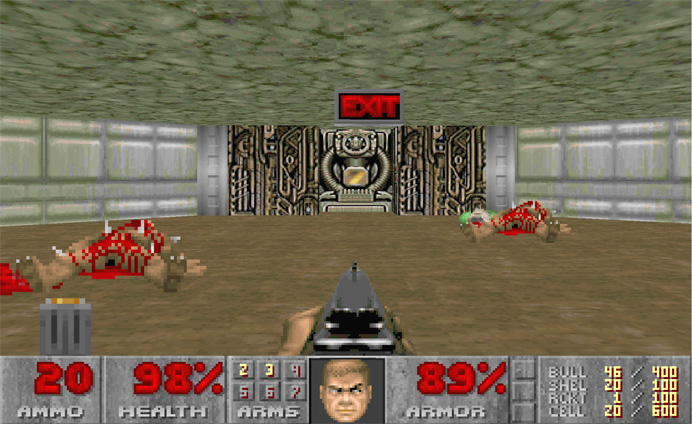 It is rumored that there will be a new Doom movie.

I don’t know anything about video games. I buy a new one every winter, just to get me through the cold. Most of them I never bother to finish. It’s just not my medium, I guess. But I know Doom. Doom and Doom II: Hell on Earth are two of a very few games to really capture me.

There are a lot of reasons to love Doom and Doom II—which, in practical terms, I consider just one long game, sort of like Godfather and Godfather II. For one, you run at like 60 miles per hour the whole time. But above all else, I’m an aesthete, so what really gets me are the games’ production design—something we should talk about in light of the upcoming film. I think this is a great opportunity to repair some long-standing damages in the sci-fi horror genre.

We already have had a movie version of Doom. It’s from 2005, and it’s one of the last gasps of that gritted teeth, nu-metal era sci-fi wave that Lost in Space and Ghosts of Mars rode. It stars The Rock and Judge Dredd and it’s actually pretty sweet. The ending, a 15 minute long first-person shooting gallery scene, is one of the more ambitious moments of action cinema in the last decade.

I have one complaint with Doom 2005, and unfortunately it’s a major one—it looks terrible. This problem is a common one with sci-fi horror. God love the genre, but at its core, it’s pretty much guys with guns walking down corridors. Featureless grays and off-whites are a very easy look to stagnate in, and is the death of sci-fi horror—just look at Europa Report and The Last Days on Mars, or the games Doom 3 and Dead Space. A character can wander off the set of one of these, into another, and nobody would ever know.

The military-sci-fi-horror thing began with Aliens and its cadre of Space Marines.  Aliens is awash in gunmetal corridors and dripping pipes, and it’s terrific. That film has such a strong tactile sense that you really feel a part of it. But few—maybe none—of its successors have done much with that look. At this point, the endless gray corridors are as routine and inexpressive as the generic western towns of 1960s television.

But Doom is different. Funny enough, the series began life as a licensed Aliens video game. But when the negotiations fell through, it grew from that film’s skeleton into something unique and wonderful.

Doom is about a heavily-armed man fighting demons with a penchant for bloody sacrifice, symmetry, and inscrutable biotechnica. Doom 2005 did a decent enough job preserving the mood of the games, and even retained a few of the amazing creatures, but it made no attempt to evoke the unforgettable look of the games. The most unique and powerful aspect of the source material was cast aside, intentionally made generic and indistinguishable from its peers.

It’s a perfectly adequate prop—a functional bit of wall with a hinge attached to it. It looks like it opens and closes pretty much as you’d expect. Fine. It succeeds at making you feel nothing.

Here are some doors in Doom and Doom II: 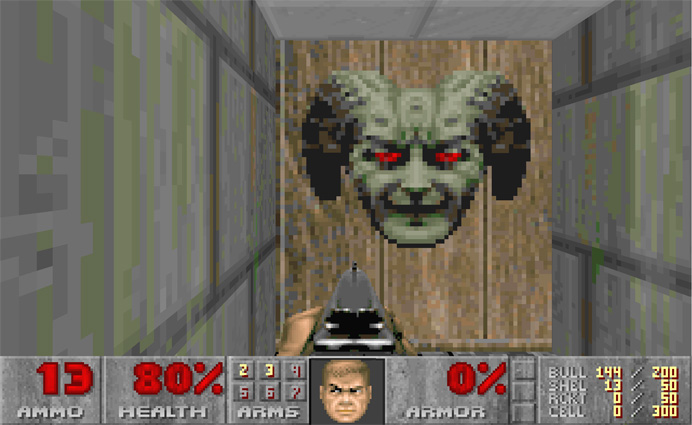 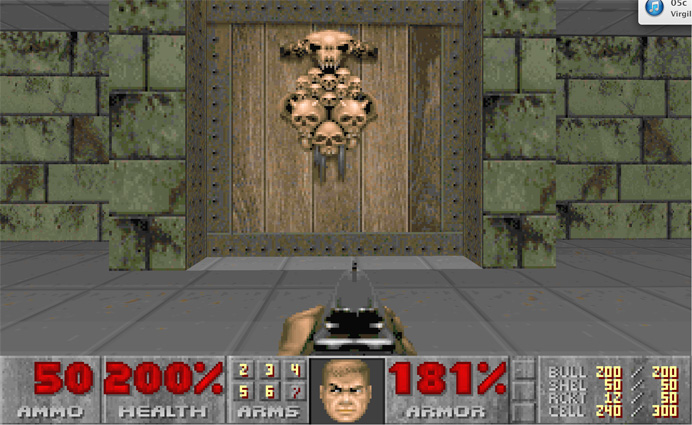 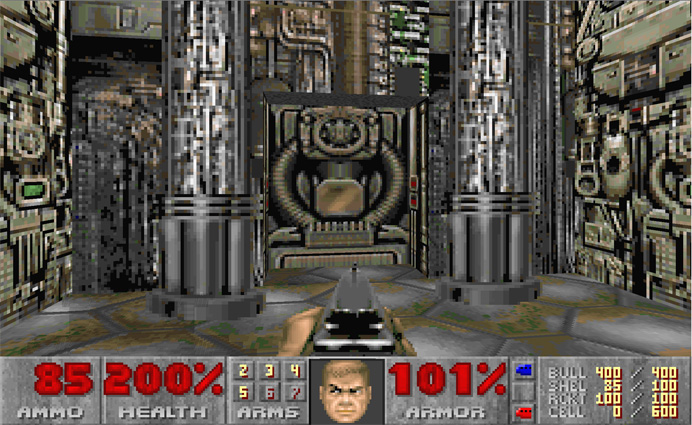 What design! From skulls to circuit boards, each is unique, expressive, and speaks to the character of the location and the mood of the game. There’s an unexpected edge to Doom that you don’t get in other corridor-walker games, a real sense that each space you pass through has a personality and a use. Oftentimes, you don’t immediately understand what that use is, which adds a strangeness sorely missing from the genre.

Doom 2005 sanded down this Grand Guignol edge to the games, which featured areas wallpapered in human skin: 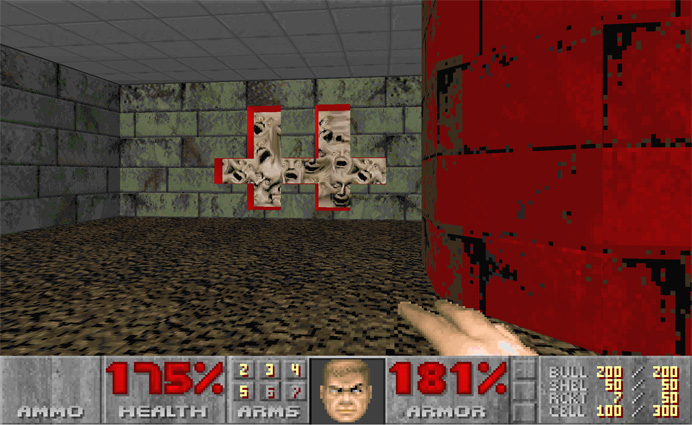 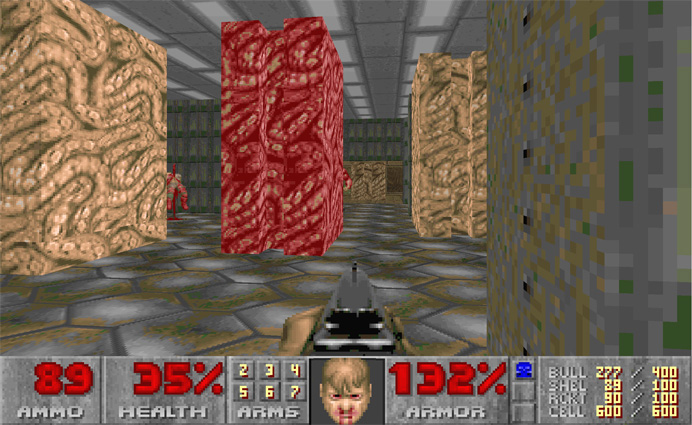 And an overwhelming sense of texture, from circuitry: 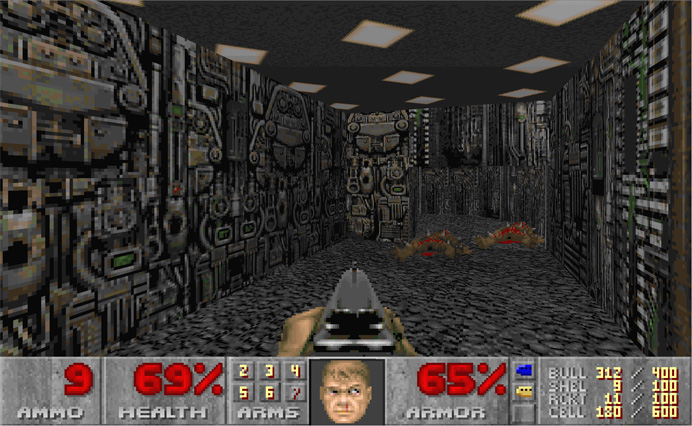 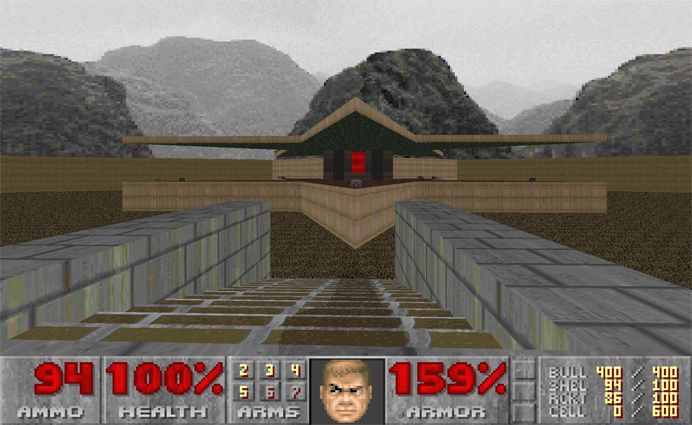 Even some of the level layouts had character: 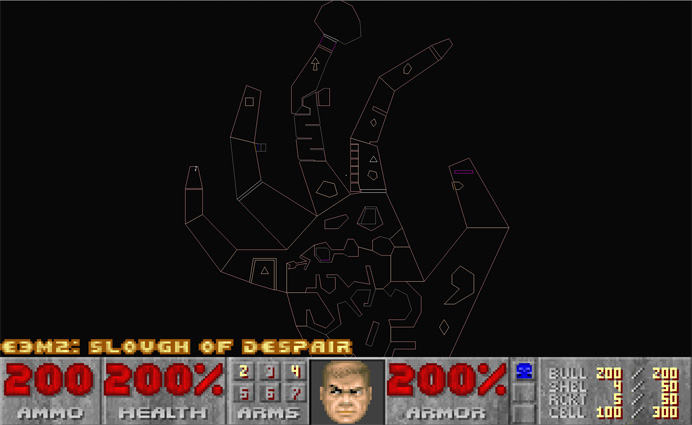 One of the quirks of the game engine that added a lot of atmosphere was the way all of the buildings sheared off at the same height. It’s an odd little touch that gives the games a sort of sinister Beksinski-esque vibe: 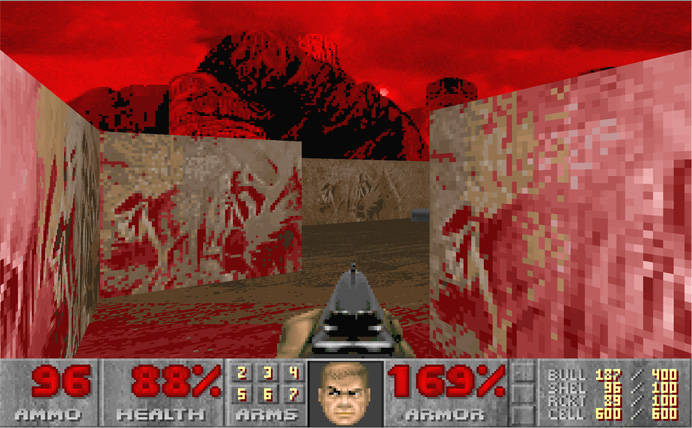 And sometimes, Doom will just wild out entirely and give you hanging corpses as far as the eye can see: 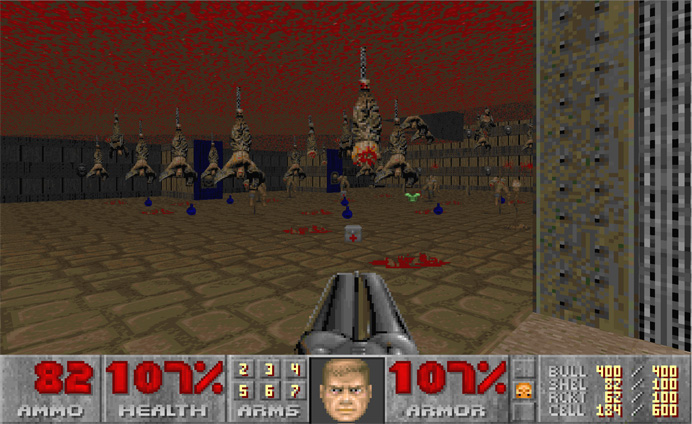 Rooms are unique and centered, some with weird little touches that you never quite forget, like what even is this? Some sort of lamp made of people, maybe: 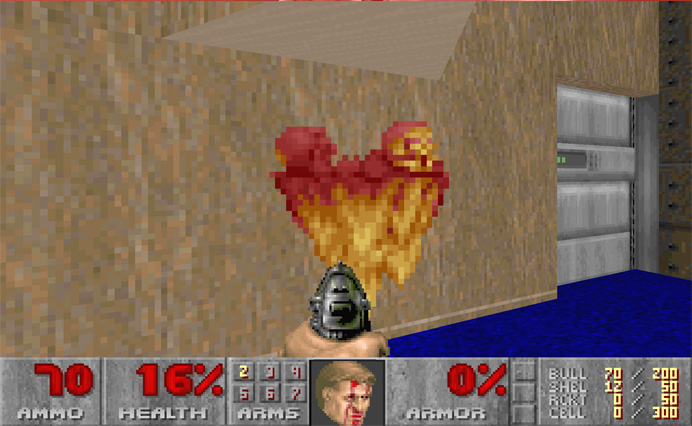 And there’s a strong sense of spatial relations in the game. Monsters appear above you: 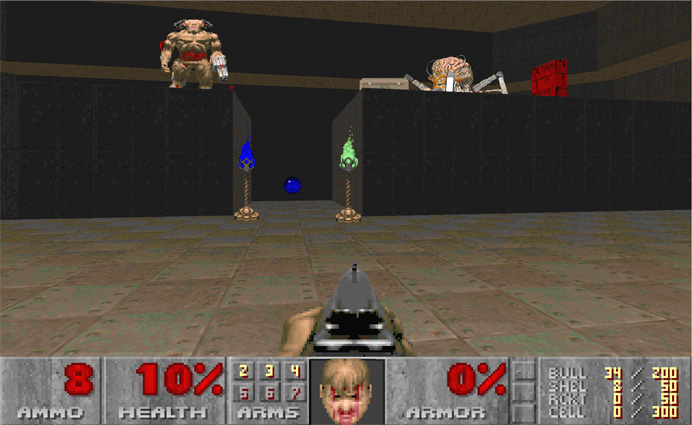 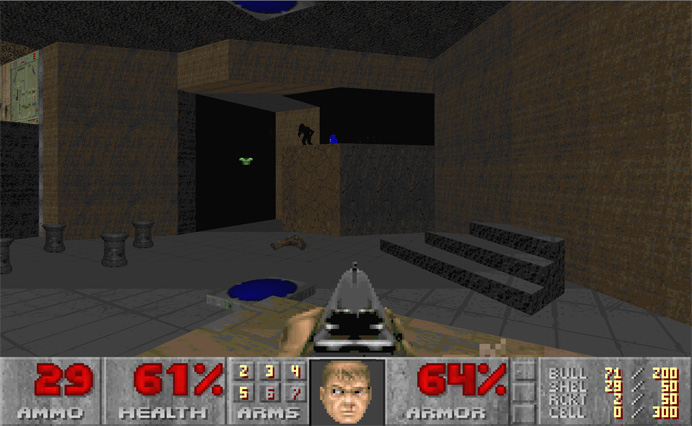 Or even facing away from you, occupied by their own lives in a space that feels more theirs than yours: 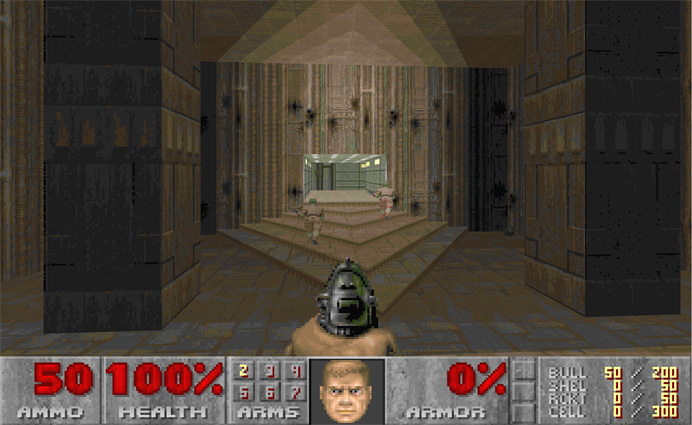 So please, new Doom movie, just go for it. Make it your own, but make it expressive and crazy and gorgeous and gruesome. Make a Doom movie that looks like the bowels of hell—not one that looks like House of the Dead II. We can’t have another thirty years of low-res xeroxes of Aliens.