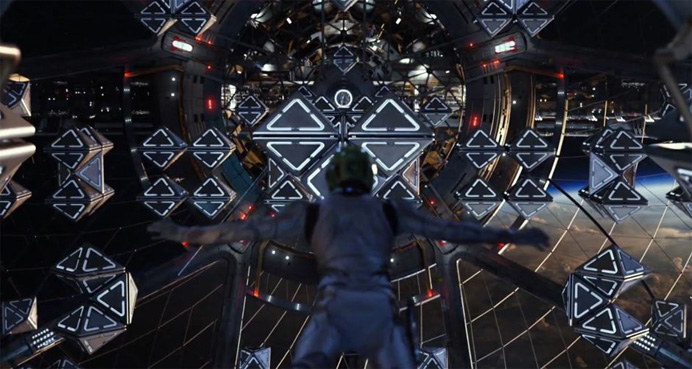 I read Ender’s Game a week before seeing the movie, and now I almost wish I hadn’t, because the book is fucking great. I don’t know whether I would have liked the movie more, or less, if I hadn’t read the book first, but I do know that I won’t be able to talk about the movie without talking about the book.

Don’t worry, though—I’m not going to make a checklist of everything the book did right that the movie did wrong. In fact, I’ll say up front that I don’t think that movie adaptations of books have any business being ‘faithful’. Or rather, I think they should be faithful in specific ways, and not in others. For instance, it’s important that an adaptation captures the themes, character arcs, and, whenever possible, the tone of its source. It’s not important that it hits every plot beat, or revisits every location, or namedrops every side character. That sort of keeping faith does little beyond providing little jolts of recognition to fans of the source material. A movie can get bogged down in superfluous details, or tripped up in its pacing, if it just methodically ticks off a checklist of things that happened to have happened in the book. And this, unfortunately, is what happened with Ender’s Game.

Ender Wiggin is a young kid who’s just been accepted to an elite military training school that orbits Earth. An alien race called the “buggers” (or Formics or something, a name they took from the sequel, Speaker for the Dead) invaded Earth some number of decades ago, and the American Hegemony-controlled International Fleet has been scrambling to upgrade its technology and strategies in order to have a better chance against a presumed future invasion.

Part of their plan is to genetically engineer kid geniuses to become the next great commanders. Ender and his two siblings are part of this program, and  he is the smartest of the three, and the last of them to have a shot at Battle School.

The ensuing story (in the book at least) is a rather complex tale involving issues that span from the deepest parts of Ender’s tortured psyche to the Formic war at large. I won’t get into it, but there’s a lot going on, including really neat intersections between psychology and morality and politics. It was a fool’s errand for them to attempt to cram it all into a 2 hour movie.

There are many scenes and characters thrown in that exist only in order to keep faith with the superficial plot of the book. But without the extra layers of psychological and moral complexity to support, these serve no purpose. An entire subplot involving Ender’s co-genius siblings Peter and Valentine was entirely axed, which was a wise decision. But for some reason, they left in a scene where Ender is visited by his sister after he quits the program, because the administrator thinks his sister should be able to convince him to rejoin. But without the depth of their original relationship, and Valentine’s own arc, the whole scene is useless, and feels really out of place.

That kind of thing happens a lot in this movie. Instead of stripping it down to its essential themes, they cover lots of ground, presumably because they want to set up these characters for the inevitable sequels. The result is a movie that moves way too fast through its most important moments.

I often complain about the tendency of some movies to rush through moments that shouldn’t be rushed through. For a director, this means taking your feet off the accelerator for a bit and letting your actors shine. For an editor, it means not trimming the edges off every shot of an actor delivering dialogue, just so you can save up enough extra runtime to not have to cut down on the climactic battle.

Imagine what the epic conversations of The Breakfast Club would feel like if the shots cut as soon as anyone finished a line—add some really generically sentimental music over their dialogue in order to build a tone and mood that the conversation itself generated before, and what you end up with isn’t a scene, it’s a trailer for a scene. And because a bunch of trailers in sequence is hard to make sense of as a story, add voiceover explaining the plot and character beats that could have come across naturally if you hadn’t fucked up the pace in the first place. This is exactly what happens to most of Ender’s Game.

There is potentially a great movie somewhere inside Ender’s Game that is just clawing to get out. As it stands though, it’s difficult to even call it a movie. It’s really just a two-hour long string of trailers. More than a couple times during the movie, I thought to myself, “Okay, when’s the movie going to start…” That is not a feeling you should get an hour into a movie, or really ever.

Slow down. Let the demands of the characters’ story arcs determine your pace. Fuck the book. I kept thinking back to the Harry Potter movies, which arguably get better as movies as they diverge further and further from the books. The Prisoner of Azkaban and The Goblet of Fire are better than the first two because they are less concerned with throwing all the shit in that the fans expect. Fuck the book fans. Make a movie.

I think Ender’s Game can be saved. Unlike a lot of movies that rush too much to cover all the obligatory beats, the terrible pacing in Ender’s Game doesn’t come from the performances or the dialogue itself. All of that is good enough on its own to work. While watching it, I was forever on the precipice of actually caring about Ender, his friends, the administrators, and the war, because what is there is really not bad. It’s often pretty good, and occasionally rather moving, exciting, and even brutal. It’s just that all these moments are glossed over by the shitty editing.

Let me do a re-edit. I’d cut out the voiceover, about 80% of the score, certain superfluous scenes and characters, and, most importantly, extend many scenes in the second and third acts. That’s it. The footage is there, it’s just not treated properly. Once more, I’ll bring up the Harry Potter movies: what they truly nailed, more than anything else, was the vibe of school. They work as high school movies, which is how Ender’s Game should work as well. A re-edit could help accomplish that, among many other things.

In my Pacific Rim rant, I bemoaned the failed realizations of a bunch of promising 2013 sci-fi blockbusters. Next to The World’s End, Ender’s Game is probably the most worthwhile of the whole lot. It’s not quite a failure. And just by virtue of the basic story being so interesting, it’s an interesting not-quite-a-failure.

3 out of 5 manipulated children.