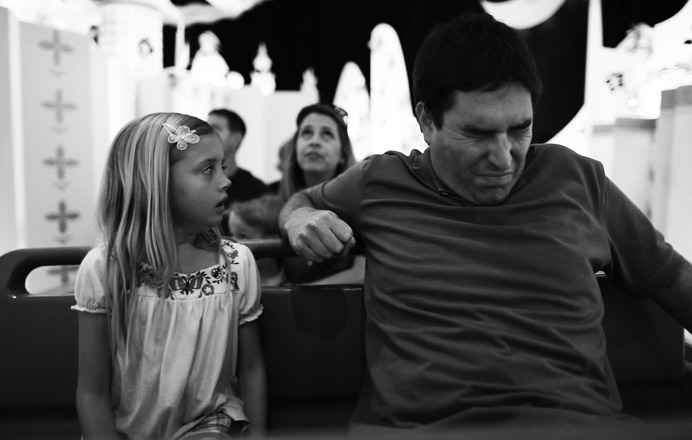 Escape From Tomorrow (2013)
Written and Directed by Randy Moore
90 min.

Last Friday, Smug Film critics Cody Clarke and Jenna Ipcar went to see Escape from Tomorrow at the IFC Center. Here are their respective spoiler-free takes on it.

Jenna: It’s hard to know where to start with this movie because it doesn’t really know where to start either. Less Lynchian than it is just random, and more bland than it is subversive, Escape from Tomorrow was an all around disappointment for me. It’s a daring concept that wasn’t fully thought through; it’s almost as if they spent more time planning on how not to be caught than they did planning the actual plot.

There’s two parts to this movie, which are pretty clearly divided by a strange five-second Intermission. On one hand, you have the story of an everyday American father, Jim, struggling with his own disappointment in himself. Tortured by the oppressive banality of his family life and haunted by his escapist fantasies, the first half of the movie follows Jim as he sees devil-faces in animatronics and becomes infatuated with a pair of French tween girls he keeps running into. The second half of the movie is basically just chock full of random plot lines and hackneyed contradictions—good is bad, innocence is corruption, princesses are whores, etcetera, ad nauseam. I can’t stress enough how blandly obvious most of the choices made in this movie are.

They also seem to force cash-ins on previous one-off jokes that weren’t funny enough to merit a second look. It’s like hanging out with that guy at the party who makes one joke that gets a couple of people to laugh out loud, and then spends the rest of the party trying to recreate that one joke to the detriment of both the original joke and his own popularity. People in the theater were laughing—heck, I laughed a couple of times—but it was closer to the laughs you see in a screening of The Room than laughs you would get from a truly absurdist or good humored movie.

As far as the Disney aspect—I’m all about sticking it to the man, but unfortunately Escape From Tomorrow’s obvious dislike of Disney doesn’t seem to have any coherency. If you’re going to talk about the seedy underbelly of a large phony corporate wonderland, at least address the seedy underbelly of said large phony corporate wonderland. Escape From Tomorrow gets about as far as pointing out that Disney World isn’t real and then throws up a couple of middle fingers, calls the women whores, and walks away. It’s almost the movie equivalent of writing a mean note and taping it to somebody’s door—if you really wanted to make a stand you would have graffitied that note on their car windshield, man.

Escape From Tomorrow isn’t terrible, however. I was almost enjoying myself until it decided to cop out into craziness and lazy insults. Part of the reason why this movie fails is because despite how much they want to portray the place as sinister and phony, Disney World honestly comes across as a really dynamic setting. With such an endless amount of mundane yet bizarre characters, I could easily watch a movie about a normal American family going about their business for two hours and be fascinated. It’s also great seeing familiar rides with different music—it definitely lends a spookier quality to them. All in all, it’s an interesting concept for a film that’s unfortunately just not a good film. Had there been better writing and more of a direction to it all, this could’ve really been worthwhile. It’s bold, but unfortunately falls short of being anything other than that.

Cody: First off, something must be said for the seats at the IFC Center. They’re absurdly good. You’re goddamn in a La-Z-Boy or some shit. At least you are when you’re in theater 3. I’ve been to the others there and the seats were normal. But theater 3 is something else. Shit don’t even make a sense.

The crowd was kind of annoying though. Jenna was on the aisle, I was one in, and to my side was a type of 20-something dumb couple I’m quite familiar with and can’t stand—the type that goes to art house theaters because they like to see whatever Indie movie everyone is talking about, and their taste is basically ‘anything weird and random and strange’ (which is basically anti-taste, because you aren’t liking an actual thing, you’re just liking a type of thing). As we sat down they were talking about Gummo, and the guy was describing to his girlfriend what stuff happens in the movie (the spaghetti in the bathtub, et al.) and she was all Oohs and Ahhs. These types of people never talk about whether a movie is actually good or bad, or what a movie is even about, or what it has to say—they just talk about what happens, and if said things that happen are out of the ordinary, it’s ‘good’.

All this to say, they loved Escape From Tomorrow. They, and the rest of the crowd, laughed at all the ‘right parts’ or whatever. By ‘right parts’ I mean anything random that happens, which I guess are the ‘comedy beats’, but really, they’re anti-comedy beats, because humor isn’t actually occurring, just zany dissonance. You get the sense that the filmmaker is a fan of the show Louie, and Tim & Eric Awesome Show Great Job!, and tried to replicate the humor of those here, but it’s clear he has no understanding of how and why those shows work.

The film doesn’t work as a not-a-comedy either. Its nonsensicalness has nothing to say. No statement is being made about life, about fatherhood, about Disney, about anything. It’s “Fuck You, Old Man!” filmmaking—the equivalent of flaming dogshit left on an elderly stranger’s porch. The filmmaker clearly has a chip on his shoulder about Disney, but it’s an adolescent chip—a chip for chip’s sake, and nothing more.

I came away from this mess sympathizing with Disney, and sharing their confusion. Whereas a Banksy piece generally has an agenda, a thesis, this style of graffiti has none. It’s just scribble. The filmmaker might as well have just gone there with a Sharpie and drew dicks on benches. This is as vapid as that.

The actual filmmaking is lazy too. The shots, the editing, etcetera. And contrary to what I heard about this film, not all of this was filmed inside the park. There are entire scenes shot in front of awfully composited green screen B-Roll of Disney World. And there are indoor scenes that clearly didn’t take place there as well. My guess would be that only about a third of the entire film was actually shot on location. What’s more, the film probably would’ve worked better as a short, comprised solely of the on location stuff.

It’s quite a relief that the general consensus from critics and online reviewers seems to be that this movie is dogshit. But it’s worrisome that actual audiences can continue to be won over by such random insipidity. Do they not realize that when they are laughing, no actual joke has occurred, just a juxtaposition of expected and unexpected? Yes, said juxtaposition is crucial to comedy—but it isn’t inherently comedic. What looks like a joke and acts like a joke can in fact not be one. And the type of laughter you hear at movies like this, from jokes like these, is uncannily similar to the nervous laughter of a friend watching their ‘bad’ friend steal a lawn gnome from a front yard or whatever. What’s more, many of the people in the audience were quite older than me. I worry for us all.

One thought on “Smug Film At The Movies #1: Escape From Tomorrow”