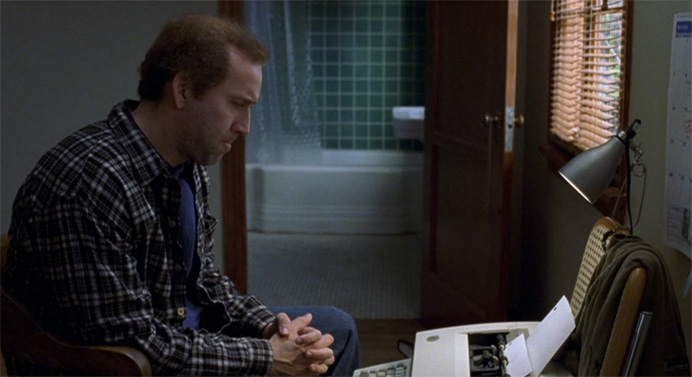 It should be easy, because you just sit down and describe the stuff in your head, but what about when there isn’t anything in your head?  They call that ‘Writer’s Block’—which Jerry Seinfeld says is bullshit. “Writer’s Block is a phony, made up, BS excuse for not doing your work,” he says.

If you’re serious about being an artist, and making a living as a filmmaker, then you gotta write.  It’s work in the same way that being a teacher or a construction worker or a nurse or an office person is.  It’s work, so do it.

Movies are made in all sorts of ways—a director films a screenplay they wrote, or was written by someone else, or was adapted from another medium like a book or a play or whatever, or, sometimes, there’s no screenplay at all. But, for me, the ultimate pinnacle of filmmaking is the phenomenon of the writer-director.  For me, this is the most interesting, because it is one person describing what’s in their head and then putting that description of screen (and with all the knuckleheads out there, it’s no wonder most movies suck).  But the three best movies ever made—Signs, Raising Arizona, and Back to the Future—were all made this way.  Not to mention Star Wars, and several other great ones.

What’s always interested me is the steps from brain to paper to set to editing to screen.  So much gets lost and changed.  There’s a wonderful, tumultuous uphill battle at ever stage of the process.  Which means that really, filmmaking isn’t necessarily about getting exactly what’s in your head on screen, but about getting as much of what’s in your head on screen as you can.

Sometimes, the real artistry lies in what the audience will ever see—the process.  For instance, the direction you gave an actor on set in order to get their best performance out of them.  We all know the story of Spielberg slowly unwrapping a toy in front of the kid who played Elliott in E.T., in order to get the right reaction.  Every movie has hundreds of those stories.

I often dream of a future where the visions in our head can simply be downloaded right to the screen.  ‘Budgets’ become a thing of the past, and directors are simply connected to machines where their ideas are converted into ones and zeros right out of their brain.  After a few sessions, the movie is done, and uploaded to a free marketplace for everyone to watch.

This direct creation might be more ‘pure’, but how would the elimination of the painstaking aspects of moviemaking effect the outcome?  To use Spielberg again as an example, we all know that technological mishaps forced him to not reveal the shark in Jaws until much later in the film.  And in the case of Star Wars—if the original had just been spit right out of Lucas’s brain, would it even have been good at all? Based on John D’Amico’s recent interview with Roger Christian, it sounds as though the freewheeling, outside-of-the-box process of physically making Star Wars informed its style and feel tremendously.

My dream has always been to make movies.  But, more specifically, to conceive, write, and direct my own movies.  In 21 years, I’ve never lost that dream, and not a day has gone by that I haven’t thought about it a little, or sometimes, a lot.

The trouble is, I have very specific strengths and weaknesses as a writer. Quite frankly, I cannot see an entire movie in my head.  I can easily doctor your script and fix up your story, but coming up with my own from scratch is nearly impossible.  It’s the bigness of it all, that I find difficult.  I can come up with a great beginning, or end, or scene in the middle.  I can write dialogue, and come up with small character touches and environmental coloring—all that fun minutia that make movies ‘rich’ and ‘alive’—but I can’t give you three fucking acts the way Shyamalan or the Coen Brothers can.

This struggle has kept me frustrated and so-close-yet-so-far from my dreams for these 21 years.  In high school, I made a confusing two-and-a-half hour feature called The Velvet Autumn.  The script was loose, pasted together over the year-and-a-half long process of production, and was always being re-written.  Ten years later, I started on Hectic Knife, and the style was exactly the same.  There is no 100-page Final Draft document on my computer called ‘Hectic Knife’—the ‘script’ was written week-to-week by Peter Litvin and I on scrap paper, and shot right after it was written—the paper itself, subsequently lost into the ether.  We truly did write about 95% of the movie, but there’s no hard document of text to show that.

And it’s that hard document of text that I really want.

I’m proud of Hectic Knife, and the way it was made.  In the scope of filmmaking, it represents a think-on-your-feet, improvisational attitude where shots are designed and executed on-set, and there is a constant free flow of ideas.  One of my proudest moments in my entire life was being awake for 72 hours straight (literally) on a Hectic shoot, on my last legs, and Pete kept coming up with idea after idea, extending an already bloated scene that we were essentially making up as we went.  I walked off, splashed some water on my face, and came back to set and came up with a really clever little idea that made it into the movie and made things click.  I’ll cherish that moment for the rest of my life.

But, it’s still not the dream.

Raising Arizona is perfect because it’s exact—it’s impossible to imagine there being a scene cut from it.  It’s a perfectly contained and executed idea.  Every shot flows perfectly into the next, and the movie never falls back on ‘coverage’—it merely uses it for its designed purpose.  Every little moment in that movie, every enunciation, color, music cue, camera movement, and lens choice, is all immaculately constructed.  Every aspect works together to create a totality of images and sounds that keeps the viewer delighted, intertwined, and intellectually stimulated.

I once read that the Coen brothers devote three weeks during pre-production to meticulously storyboarding every single shot, and then they simply follow that exactly on set.  This does two things—one, it reduces the budget and time on set, because you’re following a formula and everyone has the instructions already, so no time is wasted, and time is money.  Two, it ensures their artistic vision.  This is their auteurism at work.

Some might say that this total pre-construction deadens the result.  To that I say, just compare a Cassevettes film to a Coen Brothers movie, and you tell me which one is more ‘alive’, and which one is better.

Making movies is fun.  I loved making Hectic Knife.  I loved its controlled chaos.  Coming up with ideas on the spot is a great way to exercise your creativity.  But, someday, at least once, I would love to walk on set with the day’s shoot completely planned out beforehand—the only things still needing to be worked out being the performances, and slight tweaks in order to perfect the camera movements and lighting.

What I’ve realized is, I need to be writing.  There’s no harm in writing a film by just writing scenes here or there.  Nobody but me says I have to write an entire script all at once. But insecurity breeds excuses, and my excuse so far has been my inability to write an entire script.  Well, fuck that—I can write a scene, so that’s what I’m going to do, every day.  They could be a page, they could be ten pages.  It could just be a description of an environment and sounds, or a long speech about turtles.  I don’t know.  What I do know is that I have scenes inside me, and scenes eventually equal movies.

I hope that this piece can be looked back on one day as the first step of a movie by me.