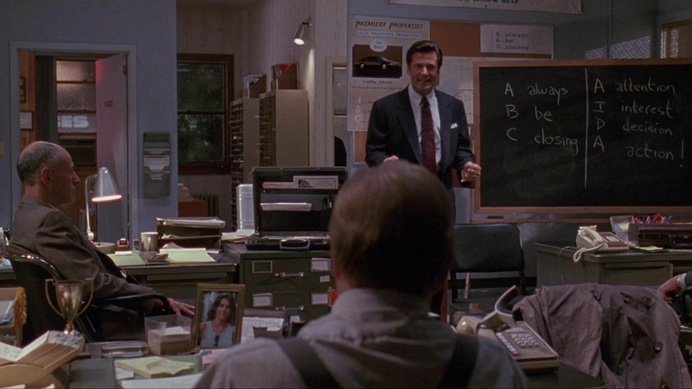 A close friend of mine committed suicide this past Monday. Someone I loved dearly and always felt like family. The last time I saw her was about a year ago, and it was wonderful—we had a great time together. It was the most perfect last memory of her that I could ever ask for.

This review is for her. One of the many things we shared was a deep love for this movie. I can’t begin to make sense of her passing, but I can at least write this piece. She’d be pleased to know it was out there.

For some reason, even though everyone’s heard of it, most people haven’t seen it. I guess because they just assume it’s some boring movie about men in suits doing men in suits things, one that just happens to have a fun name, a fun name that a movie like that can’t possibly live up to.

If they have seen it, usually they’ve only seen one scene from it—the Alec Baldwin ‘coffee is for closers’ one. (And they probably watched it on YouTube—a shitty pan-and-scan 240p version of it has 3.5 million views on there.) It’s a great scene, but it doesn’t really reflect the whole movie. And I guess people hear that, and assume that means the rest of the movie isn’t good or something. They couldn’t be more wrong. The rest of the movie is great, and Glengarry Glen Ross is one of the best American films of all time.

David Mamet adapted it from his stage play of the same name, and what he did was he fleshed it out to what it probably should’ve been in the first place. The stage play is brilliant, don’t get me wrong, but it feels like a rough draft in comparison. It’s kinda like how Joss Whedon, in adapting his film Buffy the Vampire Slayer into a TV show, realized how much bigger his idea was than he even thought.

Not only is this Mamet at the top of his game, all the actors are at the top of their game too. Al Pacino, Jack Lemmon, Alan Arkin, Ed Harris, Kevin Spacey, Alec Baldwin, Jonathan Pryce—hell, Bruce Altman, the sorta-stepdad guy from Rookie of the Year, even turns in a career-best performance. My theory is that everyone wanted to be the best actor in the movie. Nobody wanted to be out-acted amongst all those greats. And in most movies, that might be distracting, and get in the way of the film, but given the characters—highly competitive real estate salesmen—it’s perfect.

I don’t really want to say more than I’ve already said. It’s the kind of movie you should just sit down with, not knowing much, and watch in one sitting.  I’ve seen it many times, and it always holds up perfectly each time.