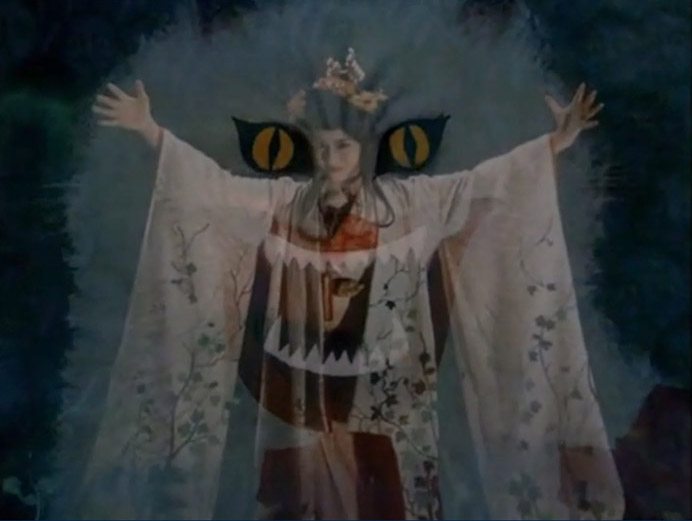 “Any old cat can open a door. Only a witch cat can close a door.”

Hausu practically needs no introduction in 2016. Seemingly everyone, from the most basic dilettante of foreign horror to the most extreme Criterion nerd, has seen it or is planning to see it at some point. Moreover, it has become a cinematic belle of the ball, a center of attention as everyone tries to offer an interpretation or explanation as to what exactly it is, and what the plot is about. No less a source than Criterion offers wildly disparate explanations for what occurs on screen, comparing it to a “ghost story”, a “bedtime story”, and an episode of “Scooby-Doo”. Unfortunately, all of Criterion’s provided comparisons and analyses are wrong. Hausu is a film originating in the fevered imagination of an eight-year-old Japanese girl, who provided concepts for the scenarios and the fears that would be on display. Somehow as a result of her unfiltered impressions—and an iconoclastic director’s free rein from his studio to create something truly outlandish—a film about the role women are forced into if they wish to survive late Showa society is born.

Before we can unpack that last statement, I feel it would be best to briefly summarize the main characters and their fates:

Mac (Sato Meiko) is a young woman with a passionate interest in snacking who presents herself in a casual, boyish manner. She gets killed when she places a watermelon in a well for cooling. This leaves her as only a head.

Sweet (Miyako Masayo) is a young woman with an inclination towards childish things despite otherwise living up to her ‘role’ in deriving joy from cleaning. She meets her end when instead of finishing the tasks assigned to her she becomes entranced by a doll.

Melody (Tanaka Eriko) is a young woman with musical talent—particularly, proficiency at the piano. She is murdered when the piano she is playing bites off her fingers and then swallows her whole.

Kung Fu (Jinbo Miki) is a young woman with expertise in martial arts who takes on the various challenges presented by the house of horrors with gusto and a complete lack of fear. She meets her end when she leaves her companions Prof and Fantasy and tries to take on too big of a task on her own.

Prof (Matsubara Ai) is a young woman with keen intelligence who comes close to understanding why exactly Gorgeous’ Aunt is killing them. She meets her end when she tries to control Shiro the Cat against Gorgeous, using her Aunt’s diary.

Fantasy (Oba Kumiko) is a young woman who comes closest to living up to the chaste ideal propagated, by cultivating a deep fantasy life based around adoration for her teacher. Although this lets her survive the various pitfalls and traps which befall her friends, she still passes on, when she sees the connection between Gorgeous and her Aunt, and calls her “Mommy”.

Gorgeous (Ikegami Kimiko) is a young woman who is at the center of the film, and for good reason. Of all the female characters in the film, she is the one who performs femininity the most rigorously, even going so far as to reapply her makeup before greeting her Aunt. It is this foundation that causes her to be transformed in the archetypal Showa Yamato nadeshiko (tradtional idealized Japanese woman) all the way down to dressing in wafuku (tradtional Japanese clothing).

The most critical part of understanding the film’s message is in understanding how the message is disclosed. This is the element which is most attractive to audiences, but also the most misunderstood, and it is present every frame of the film. 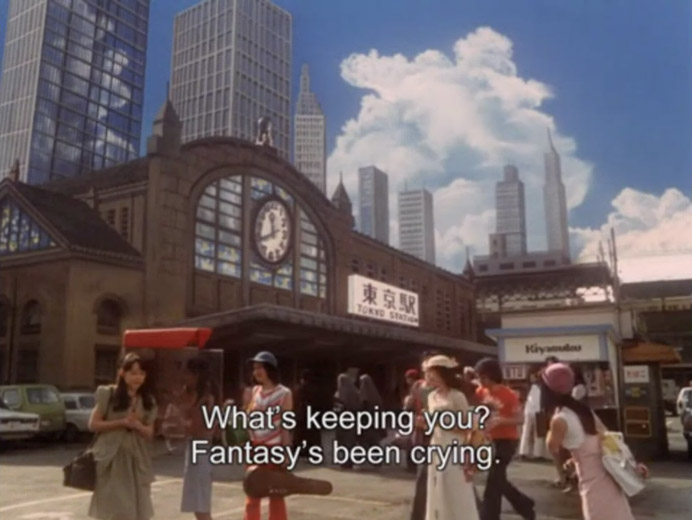 The day-glo 70’s landscape of Tokyo serves as a camouflage to the actual reality of Showa society. As saccharine pop music plays, colorful characters engage in work that seems like play. However, the actual society exists in the margins just outside of the main characters’ perspective. For instance, on the train they take to Karuizawa, there’s a mother wearing a kimono, various nuns with a priest, and two gaijin sailors. Even the encounter with the colorful produce salesman (who wears the standard-issue Showa male haramaki) takes a tone that is fun, goofy, and unassuming.

Once they enter the compound of Gorgeous’ Aunt, the tone of the absurdities changes drastically, and the horror begins to take shape. Specifically, various gags either serve to punish the characters for their transgressions against the established order, or to mold Gorgeous into the shape society tells her she must be. Of these, the most important to the narrative regarding Showa womanhood are the doors. This is introduced early on with a saying used in reference to Shiro (referred to as Blanche in the localization): “Any old cat can open a door. Only a witch cat can close a door.” What this means in the context of the film is that, as a young woman in Showa-era Japan, there are many doors you can walk through, but in the end, there is one that will shut behind you, and that is the room you will stay in. This is dramatized quite literally when all the doors out of the compound are closed in rapid succession. 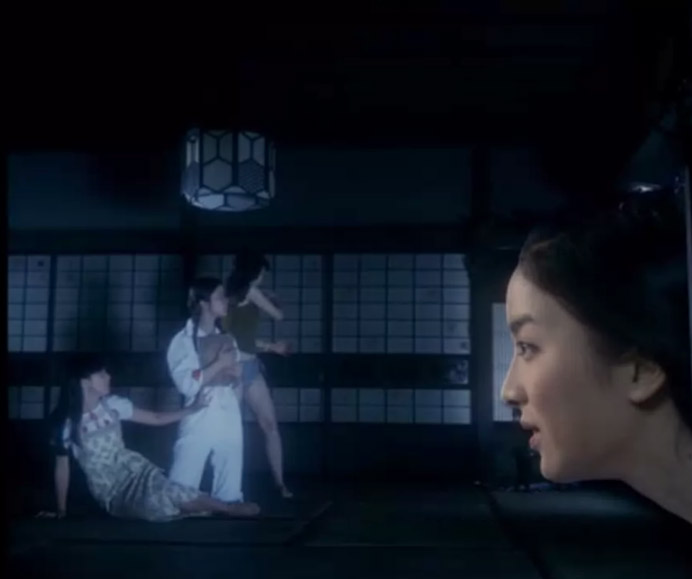 In the same way that the doors of the titular house are closed in order to forbid the surviving women from escaping, so is the concept of womanhood at the time of the film’s production. To briefly bring a historical perspective, there were two eras preceding Showa—the Meiji (from 1868-1912) and the Taisho (1912-1926). Starting in the Meiji period and continuing into the Showa (1926-1989) was the philosophy referred to as “Good Wife, Wise Mother”. Within this framework, the only place for women was as household labor machines and producers of children. Anything outside of this cage was absolute forbidden. This came about during an intense course of nation building, as Japan first entered a capitalist stage of development,  then an imperialist one.

The specific time of the film’s production, 1977, falls during what is referred to as Late Showa. It might be easy to subscribe to the progressive myth and assume that because this was a later era, women’s station had improved in Japanese society, with opportunities to reach dizzying career heights like ‘office lady’ and wear ‘liberated’ Western fashions. Contrary to this impression, in many ways, the enclosure around female behavior was even more extreme than it had been in the build up to and action of World War II. Not only were women expected to give themselves completely to the male figures in their lives, but even their language was strictly regulated, so as to be more passive and formal than the language of men. These changes only served to deepen the essential nature of the “Good Wife, Wise Mother” program in the supposed new world of Post-War Japan. In the same way that in countries such as India, various archaic institutions persisted despite claims of change and development, so too did they continue in Japan.

This is even directly evident in the film itself. The teacher whom Gorgeous and Fantasy speak to about her upcoming marriage is actually entering an omiai, or, arranged marriage. This is a centuries old practice just as evil as is done in other countries, yet all the young women can say is how romantic they find the whole thing to be. Fundamentally, despite a veneer of progress, the indoctrination of girls and young women into what is seen as the only proper existence for them continued on in the same form as when this model of it began. With this information in mind, you can understand the supposed ‘transgressions’ which led to each female character’s death expect for Gorgeous and her Aunt. Be it eating too much, or having an active fantasy life outside of the one prescribed by society (because what could be more fantastical than waiting for a dead soldier to return home?) if you step out of line, you will be punished or even destroyed. 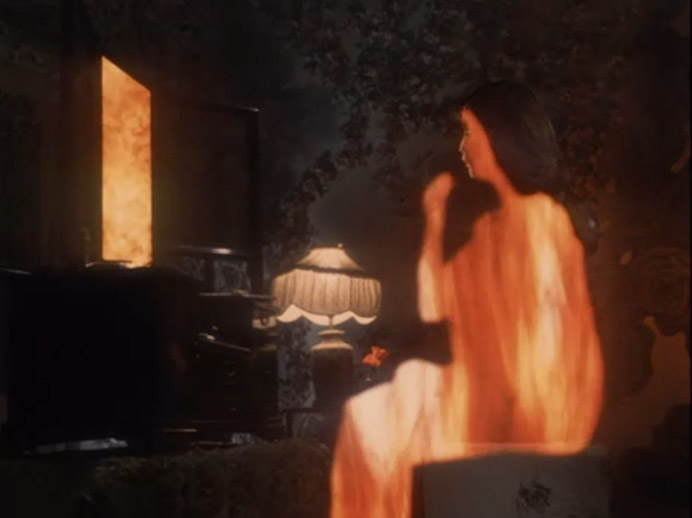 This is the only major weak point in a film that otherwise possesses such a distinct synthesis of what is being said and how it is being said. It also speaks to the limits such a production can undertake—when you have Obayashi more interested in rebelling against filmmakers such as Ozu (who had his own style of nascent feminist critique) and Kurosawa than in seeking to understand what his eight-year-old niece knew so well. At such a young age, she already not only comprehended what was in store for her, but was able to articulate it in a wonderfully clever and intuitive manner. Yet, Obayashi and Katsura went with their surface level understanding of what was at hand.

Hausu both is and isn’t the sort of wacky, empty-headed sideshow most conclude it to be. It’s true that, on some level, this is a film with meaning and substance. But the screwy visuals are effective at establishing a story of women who are being killed simply because they don’t fall into the perfect role they were raised to fall into in society. (This is because, ultimately, the ideal in and of itself is goofier than any of the gags in the film.) But, the film hobbles its own feminism by demanding its actresses provide the audience with cheap sexual thrills. Which begs the question: Is the sexual imagination of the male not enough on its own, that women have to constantly perform in order to satisfy it? Must it be demanded that women be sexually enticing to men even in a film that attempts to advocate for them? In this tendency to disregard women’s dignity and sexual autonomy for the sake of seat filling, the film tragically becomes that which it is directly parodying on screen—a richly colored veil for insidious evil. The same evil that fills young girls with terror at the prescribed life path laid out for them.