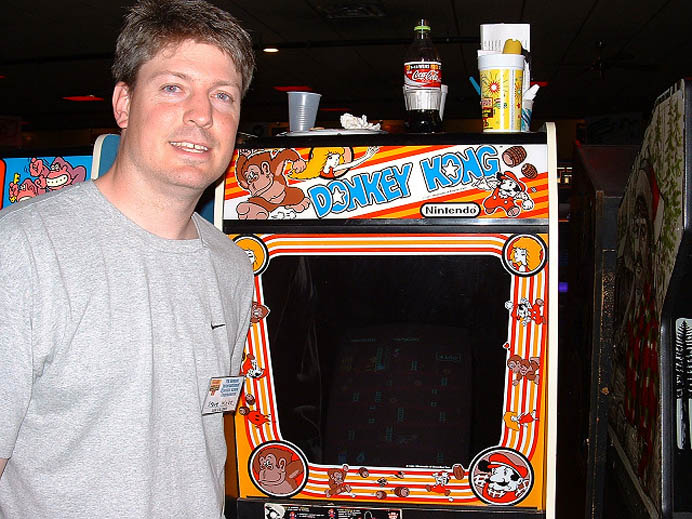 I saw The King of Kong five times in the theater, which is a record for me (I only saw Jurassic Park four times).  I saw it the night it opened at the AMC in Times Square, and the theater was about half full, which is pretty impressive for a limited release documentary.

What begins as an innocent exploration of the subculture of classic arcade gaming emerges as one of the great battles between protagonist and antagonist in all of narrative history.  Steve Wiebe, the archetypical ‘aw shucks’ Luke Skywalker, is pitted against the most villainous Darth Vader in Billy Mitchell.  But, by the movies’ midpoint, the conflict seems to have been resolved, and with an anticlimactic whimper:  Steve, who had just found his Donkey Kong high score corruptly and unjustly invalidated, pits himself against the Empire of Twin Galaxies and attempts a public proving of his Donkey Kong supremacy—but when Billy slyly submits his own score via video tape, a score that is accepted without scrutiny, all appears to be lost.

Steve returns to Washington defeated, with his tail between his legs.  Being a documentary, it could have ended there.  There is no script; the story is literally happening as life happens, unraveling organically and being captured by intelligent filmmakers, hopeful of the next break in the narrative.  That break came by way of an unexpected phone call.

The documentary gods smiled and offered a third act to the story, through The Guinness Book of World Records calling and offering the chance to have ten scores featured in their next edition.  This would be Steve (and Billy’s) opportunity to compete head to head for the official top score.

The filmmakers traveled back to Washington to find Wiebe happy with his family, yet left empty and drained from his most recent defeat.  From behind the camera, we hear the interviewer ask Steve, “What if I told you that Guinness is asking Twin Galaxies to submit ten scores for their next edition, and there’s a competition in Florida to see who goes in?”  Steve pauses and says, in classic, real life documentary fashion, ‘’Well then, I gue—I guess I better get practicing” and then BAM, Eye of the Tiger blisters on the soundtrack.

And we all cheered.  That sprinkling of a hundred or so documentary lovers in Times Square got up and cheered.  A black guy yelled “Go get that motherfucka!”  It was the best experience I’ve ever had in a movie theater and by the movie’s end I was crying my eyes out.

Moments like these are earned.  They’re earned by way of a careful juggling act that pulls together all of the elements of cinema.  At the foundation is your story, whether it be a great script, or in this case, a great eye for real life drama.  If the story is the foundation or frame, the style must then be built around it.  Performance, lighting, color, sound, shot length, camera movement.  All of these elements control your dynamic range and your dynamic range dictates your ability to capture and thrill an audience.

In The King of Kong, we really care about Steve.  His introduction in the first act is soft.  His own piano music eases into his opening sequence and the characters that populate his world are warm and loving.  His parents are supportive and his wife is a doll.  This works in contrast to Billy’s introduction, which directly precedes Steve’s.  Billy’s introduction is jagged and biting.  Billy is a larger than life figure and his comments are unbelievable and hilarious.  Opening with Billy hooks you in, and arriving at Steve offers a soft cushion to rest on after the power of Billy Mitchell.  This same device is used in Star Wars, where we first see the large and scary Darth Vader and then arrive at the boyish innocence of Luke Skywalker.

By the midpoint of the movie, we are whole-heartedly rooting for the put upon Steve Wiebe.  When that magic moment of him deciding to “get practicing” comes, we are so far on his side that a hundred people stood up and cheered for a guy to get the high score in Donkey Kong.

The way The King of Kong plays out seems as logical and fluid as Star Wars (actually much more so).  My point here is that we’re never conscious of its unraveling; we just follow it, happily.  That structural invisibility is very much designed.  And it’s in that design that we find its inherent transcendence.   It’s pretty fucking easy to meander around using “abstract” images to tell “atmospheric” “stories” like so many indies.  People pick on Hollywood for being too formulaic (and it’s true that 99.9% of Hollywood’s output is trite nothingness) but The King of Kong is far from Hollywood— it’s about as indie as you can get.  And for that matter, so is Rocky, Clerks and The Blair Witch Project, all of which follow the ‘Hollywood formula’ with more stringency than most Hollywood movies.

Hollywood doesn’t use this formula solely in order to quickly churn out product.  It also uses it because it is quite literally the only way to produce advanced narrative art.  Movies like The King of Kong utilize that formula because it’s the best way to tell a story.  Imagine if The King of Kong was made by an unwieldy, untalented filmmaker like David Gordon Green.  Instead of a tight, effective, human story, it would just be b-roll of joysticks with sparse guitar music under it.

The truth is, formulaic cinema is much harder to do well than anything abstract.  Without rules, you can do whatever you want, hide behind the guise of art, and call it genius.  In contrast, while operating inside a formula, you must work hard to create characters that are so interesting, likable, hatable, etc., that they stack up against the millions of other characters in storytelling history.  Now that’s a tall order.

The beautiful thing about art is that there are no rules.  You can do whatever you want, you can film the Empire State Building for eight hours and call it a movie, and you can even convince masses of people to believe that your useless abstraction is brilliant.  And more power to ya, bud.  But, abstraction is the road to bankruptcy, not salvation.  John Cage’s 4’33” is not transcendent.  It’s not even anything.  David Lynch has made some great movies, but his best movies are Blue Velvet and The Straight Story, or, the two that most closely follow ‘the rules’.  I like Eraserhead as much as the next guy; there is creativity and beauty abound in that thing and it’s infinitely inspiring.  But it’ll never hook me, or anyone, as well as a perfect shift between screenplay acts, because our minds are keyed into that structure.  And executing that structure well is much more impossible than dripping random splotches of paint all over canvas.  What’s more difficult: creating something amazing by meticulously coloring inside the lines, or doing whatever you want out of some half-hearted, misplaced fuck you to the lines themselves?

The late, great Blake Snyder’s Save the Cat can’t save cinema, but it can at least help.

This piece was in response to this thing.

Blake Snyder is the guy who wrote Blank Check. He was a prolific spec writer who sold an awesome script to Spielberg called Nuclear Family, a movie I wish they wouldve made, about an atomic family of superheroes.

5 thoughts on “In Defense of ‘Save The Cat’”