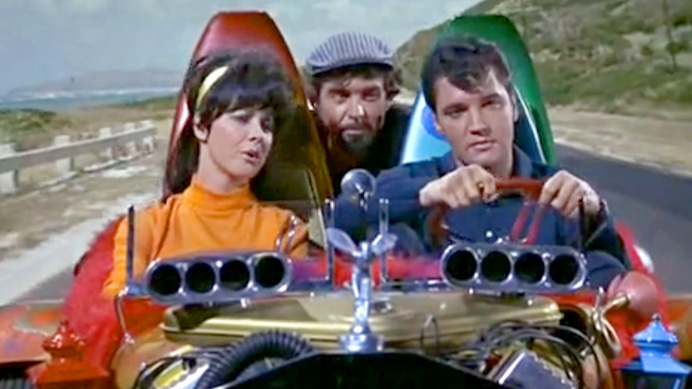 Lieutenant Ted Jackson (Elvis Presley) is about to be discharged from the Navy after serving his country as a “frogman”—aka, a guy who dives for mines. While out on a mission, a civilian speedboat with three bikinied ladies and a guy, Gil (Skip Ward) who looks like a real life Ken doll, decide to just hang around. Dina (Pat Priest) a bikini-clad blonde, dares Gil to dive down there too and take a photo of what they’re doing.

Underwater, Ted notices a sunken ship and a treasure chest, but gets distracted when the flash from Gil’s camera goes off—this is top-secret government shit, Gil. He chases Gil to the surface and double-checks that none of these bikini girls are secret communists. Then they confiscate the camera film and send them on their way. Gil, however, tricked them and secretly kept the real film.

Ted then decides to ask an eccentric town local about the history of that sunken ship he found. Captain Jack (Frank McHugh) is an ex-children’s show host who enjoys dressing up in diving gear and pretending he’s underwater while home alone. Jack says there are stories of a treasure there, but can’t remember what they are, so he tells Ted to go find Joe Symington for more info.

Ted goes to find Joe and ends up in a hippie commune full of yoga, couples kissing in large quantities of spaghetti, and naked women covered in paint rolling around on a canvas. It turns out Joe is actually Josephine (Dodie Marshall) and she confirms that the ship belonged to her great grandfather. She claims the sunken treasure is Spanish gold.

After being officially discharged from the Navy, Ted gets his buddy Judd (Pat Harrington, Jr) to agree to help him recover the treasure. Judd agrees on the condition that if this doesn’t pan out, Ted comes back to sing at his nightclub again, and they make a point to not tell Jo they’re going out to steal her grandfather’s money. Meanwhile, Ken Doll realizes there’s treasure in that photo he took, and he and Dina get to scheming.

Dina is sent to distract Ted while Gil goes to Captain Jack and borrows his diving gear. Ted catches Ken in the act and they get into a brawl on Gil’s boat. Gil manages to kidnap Captain Jack and the equipment and heads out. Ted runs back to tell Jo the bad news, and finds himself at a wild swingin’ 60s art house protest party. His car gets taken apart by an art eccentric who turns it into a literal automobile mobile, and so they have to borrow this guy’s car—a car made up of a feather boa, primary colored surf boards, and random metallic patterns.

Ted, Jo, and Judd eventually catch up to Gil and Dina out in the middle of the ocean. Ted and Gil brawl underwater in full scuba gear—Ted brandishing a crowbar, and Gil, a bowie knife. They’re pretty much fighting to the death when Ted manages to stick the floats in Gil’s suit and pull the cord for the compressor. Gil’s suit immediately inflates and he rises quickly to the top (also pretty sure Elvis just gave him the bends).

Ted secures the chest and Dina congratulates him and says no hard feelings. (Everybody’s somehow just chill with it despite the whole underwater fight to the death thing that happened.) They then take the chest to a jeweler who tells them the coins are just copper and the whole thing is only worth $3900. Ted decides to donate his share to Jo’s hippie commune art center and everybody else follows suit. Ted goes back to work at Judd’s club, they throw a party, and nothing is accomplished.

This was Elvis’ last movie with producer Hal B Wallis and there is something entirely careless and rushed about it. It’s not really any worse than the others plot-wise, but Elvis’ acting and singing is overtly phoned-in. There are a couple of lines in this film where you can’t tell if Elvis is just trying to screw over Wallis’ cash cow or if he’s reading the lines off camera. Wallis was apparently also done with Elvis’ shit, and they clashed on set throughout the film. (Plus, Elvis is looking thinner again in this movie, in a sort of way that suggests drug use to me.)

There’s a lot of weirdness in the movie as is. The wheel of women aside (I’ll leave that to you to discover), there’s a whole lot of shitting on counter culture, which I suppose plays into Elvis’ straight-lace Southerner image. The ridiculous yoga class, stupid performance art, the pretentious artist with no social skills, the protestor who doesn’t know what she’s protesting—it’s all more dismissive than it is funny. I did like Josephine, however—she’s a weirdo, but that’s refreshing for an Elvis movie love interest. Can’t say I was too happy with Elvis referring to her as “the ol’ organ grinder” when he first sees her dancing, though. (How’d that innuendo get past sensors in the ’60s?)

Best Song: Oh man, it’s gotta be this jaw-droppingly terrible yoga song, “Yoga Is As Yoga Does,” in which Elvis does yoga in chelsea boots and flatly sings a terrible duet with lyrics worthy of a kindergarten class. This song is truly one of his most embarrassing movie moments.

“You Gotta Stop,” on the other hand, is genuinely enjoyable and energetic and fun. I like how the whole band dances along. 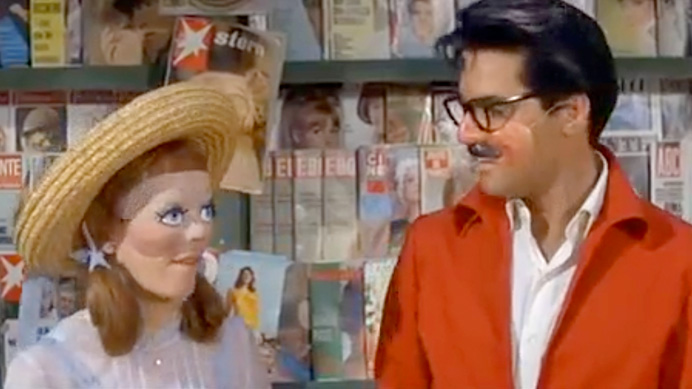 Guy Lambert (Presley) is an American nightclub singer touring Europe. A young British girl named Jill (Annette Day) catches his eye and when she invites him back to her apartment he’s elated. But Jill, despite her initial bold request, seems more interested in making tea and chatting instead of making out and/or bangin’, which gets Guy pretty miffed—he just can’t seem to seduce her.

After mistakenly sitting on her tea set and then changing into a robe, Jill decides to scamper and Guy says good riddance. Once she leaves, the doorbell rings and Guy opens it. A strange man with a Dick Van Dyke British accent immediately punches him in the face. “Oops, wrong door”, he says, and walks away. (Welcome to this movie.)

The next morning, Guy wakes up on the floor to a phone call from Jill’s uncle. They meet, and then Uncle Gerald (John Williams) asks Guy if he’s going to marry Jill. Guy gets annoyed, and when he realizes Jill is only 17 years old, he immediately dumps her. But he can’t seem to shake her—when he gets on the boat to Brussels, she’s there. He tells her to get the hell away, and she claims she’s just on the boat to go to Bruges (though, she also tells another young man on the boat that she’s going to get married to Guy). Meanwhile, two thugs randomly steal Guy’s luggage and sew a bunch of smuggled diamonds into it.

Now, suddenly, the accidents start to pour in—first it’s a giant piece of luggage that just misses Jill, then it’s a whole cart of luggage that almost runs her over. Guy’s suspicious, but sends Jill on her way anyhow. However, after Jill shows up at his concert and gets in the way of him chatting up a pretty lady, Guy knows he has a real problem on his hands. Never mind the car that almost hits him in a third attempt to murder Jill, now he can’t ever shake this teenager. At his hotel room, Jill has switched roles with him—now she’s the one forcing herself on him (while he spills wine on her butt).

Jill convinces him to go to Sweden, so they hitch a ride on a chicken truck to Antwerp. Guy performs a long annoying song at a Carnival and has a dance scene with a child. And that lady he was hitting on before at the club, Claire (Yvonne Romain) is there again. Jill gets angry and storms off. She runs into that guy she met on the boat and he takes her into the park to show her an old well. Turns out what he actually wants to do is murder her—he says he was hired by her Uncle to kill her before she turns 18 and gains access to her inheritance. Guy busts in at the last minute and karate chops the hell outta the guy and then kicks him into the well, killing him. The next day, this dude’s dead body is on the front cover of the newspaper, so they go into hiding.

Guy manages to get arrested by three dunderhead inspectors (The Wiere Brothers) and hauled to the police station where he’s accused of kidnapping. Uncle Gerald is there and says he’s going to go get his niece, but Guy accuses him of plotting to murder her. They end up in a stand off, while Jill is secretly whisked off to Claire’s house. Eventually, Guy has the revelation that Claire’s been working for Gerald this whole time, and so he literally jumps through the window and steals a cop car to go rescue her.

After a car chase scene, an attempted gas poisoning scene, a broken down door scene, and a brawl in which Guy punches Claire in the face scene, Claire admits she works for Uncle Gerald and gets him arrested. Then the smugglers get away, Guy and Jill get married, a parrot says “Do you know what this is” and Guy says “The End!”

From fake Beatles madcap comedy (they even brought in Norman Rossington) to moody murder plots (they kill a man!) to terrible musical selections (Elvis seriously sings Old McDonald Had A Farm) to creepy underage love interests (birthday midnight countdown style) Double Trouble is straight up bad. The poster talks a lot about mods, but there’s literally nothing mod about this film except for the opening credits—which are such a perfect mix of 60s bright colors, booty shaking, eye makeup, and freeze frames that the movie that follows is even more of a major let down.

Elvis’ lines are terrible and the music choices in this are harsh. There’s really nothing here for him to latch on to. He spends most of the movie angrily not getting laid and pushing this teenager away (he straight up tells her he only said he loved her because he wanted to get laid). His character is unappealing and immature—it would be fine for him to reject her based on her age, but once he knows he should just man-up and deal with her like an adult, not sit around mocking her to her face. Elvis does wear some signature Elvis threads in this movie however—the red long-lapeled shirt with a white jacket comes to mind.

Their depiction of Europe—which is all just shot on Hollywood sound stages—is smoky, ugly, and full of weirdos. All of the comedy falls flat, and the main love interest is mostly annoying. Her acting feels genuine for the most part, though her character and lines are just awful. Annette Day was apparently just some girl a producer found in a shop and decided to hire. You can kind of tell, as she does not possess ’60s Hollywood looks. She does, however, have a really refined speaking voice.

Interestingly, as a side note, Elvis never once played a concert overseas! That was fairly shocking for me to learn, as Elvis is one of those universally known and beloved figureheads of music. Apparently it was at the behest of Colonel Tom Parker who had visa issues himself and decided to shaft Elvis’ career because of it. Elvis, get out of these abusive relationships.

Best Song: I won’t embarrass Elvis further by linking to Old McDonald, though a quick google search will bring it up. The only song I enjoyed in this one was “City By Night” which has classic Elvis poses and a classic Elvis sound, plus sweet trombone action.