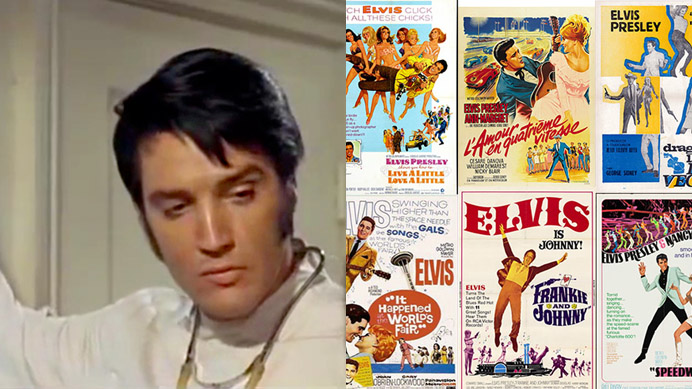 I’ve done it, guys—I did Elvis! To be specific, I did all 31 Elvis films, two a week, in about four months time. This has been a wild ride, and I thank all of you that have followed me through it.

If you remember, I set out on this journey with merely a passing fascination for Elvis, and a huge ambivalence toward his films. I finish this journey with now a plethora of Elvis film knowledge, an Elvis t-shirt, a vintage Elvis belt buckle (gifted to me randomly!), copies of both Peter Guralnick Elvis biographies (Last Train to Memphis and Careless Love: The Unmaking of Elvis Presley) and a small collection of very attractive Elvis JPEGs saved on my desktop.

I like to think that this project has changed me for the better—I now know what it’s like to soar with Elvis at his highest highs, and cringe for him at his lowest lows. I did genuinely have a lot of fun with these; there’s something very watchable about these movies, which I can’t say for most crappy ‘60s films. I’m sure it would have been a different experience had I been there when they were coming out, but to view them as a retrospective has been a real trip.

Elvis was just fun—he embodied that pure, unfettered, visceral feeling of singing and dancing your heart out. It was that force that made sequin jumpsuits look cool and shaking your ass look manly. Heck, he even made womanizing look like fun for everyone. And his movies, like himself, were equally as unpretentious and easy to digest. While the plots were often inane and the music quality dropped severely throughout, you always came wanted to come back and see what Elvis was up to this time. Some of these are worth sitting through just for that one song, or that one performance, or one scene of Elvis kissing three brides on the mouth before he gives them away to their husbands on their wedding day. I now truly understand how Elvis became such a larger-than-life presence– that unachievable ideal that eventually brought Elvis himself to his knees.

But I digress. Lets take one last trip though Elvis film-review-land with his 31st and final film: 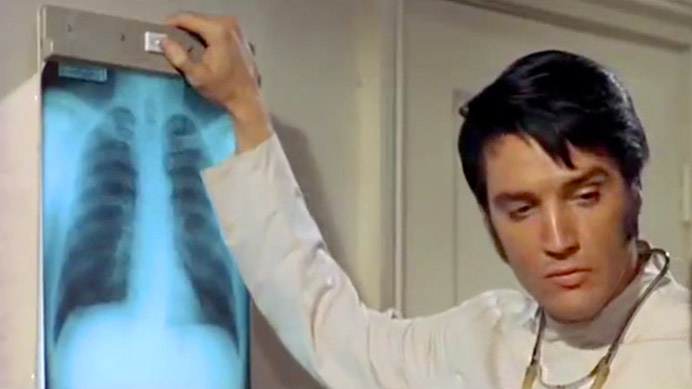 Sister Michelle (Mary Tyler Moore), Sister Irene (Barbara McNair) and Sister Barbara (Jane Elliot) are chosen by the church to go on a top secret mission to infiltrate the ghetto. They are sent incognito—disguised as three unassuming, normal women who show up at a doctor’s office to pose as extra help. That doctor just so happens to be Dr. John Carpenter (Elvis Presley); a southern-accented, no-nonsense, musically-gifted, tall-dark-and-handsome man. He’s suspicious at first, and thinks these three women look too weak and innocent to make it in this tough part of town. “Diplomacy here starts with a switchblade knife. Two of the previous nurses were raped, one against her will,” he says with a wink. (Groan.)

The rest of the film revolves mostly around John’s regular patients and the nurses doing their best to better the neighborhood. We meet Julio (Nefti Millet) a teenager with a speech impediment who enjoys holding knives (nothing suspicious there). Michelle takes him on as her patient and has him come in for speech therapy every week.

There is also a girl named Amanda (Lorena Kirk) who acts deaf and mute, though John suspects she’s autistic. He treats her with “rage reduction,” or, what was known at the time as, Holding Therapy. This entails forcefully hugging the child who refuses to touch or make eye contact with you and telling them “I love you” until they scream, cry and struggle for hours, eventually tiring and then I guess just getting over their autism? That’s what happens here at least. To view this scene now feels fairly cruel, but then again, so was the 1960s definition of Autism—a disorder thought to have been brought on by having a cold and unloving mother (thanks, ’60s male doctors).

Meanwhile, Sister Irene is sent out to make house calls. Irene is the least thrilled to be in the neighborhood, as she says she grew up in a similar setting and joined the convent to escape it. At one point she argues with some black power guys who challenge her on disowning her race and heritage. There’s also Sister Barbara, who starts a boycott of the local grocery store when she realizes the cashier has been ripping off people of color. John and Michelle, of course, start to fall for each other, but he doesn’t know she’s actually a nun. Julio notices this budding romance and gets jealous.

The local Father decides he hates all three secret nuns because they listen to secular music and treat people of color as equals. It is decided that the three women are becoming too casual, and they’re ordered to put their habits back on. Michelle fights hard against it, she says there’s more undercover work to be done. But she is overruled, and all three nuns return to their flat in full nun garb. Michelle, dressed in black and white, approaches John to apologize for not telling him sooner. He feels hurt and betrayed—he spent half the movie hitting on her and couldn’t figure out why it wasn’t working. Now he realizes what she meant when she said she had ‘somebody else.’

Before they go, the nuns decide to throw a block party for San Juan de Cheguez. A local loan shark mobster called The Banker (Robert Emhardt) shows up and demands Sister Irene pay back the loan she took from him to fund the festival. She tells him she refuses to pay him back and announces to everybody there that all of their debts are now paid. The Banker punches her in the face, a fight breaks out, and the two black power dudes come to Irene’s rescue. Nobody gets arrested, and the cops all look the other way because punching a nun is wack.

Later, Michelle walks home and gets dressed for bed. Julio jumps through her window and attempts to rape her at knifepoint (FYI—this is somehow a G-rated movie) but John hears her screams and punches Julio out. Time passes, and we see John visiting Michelle at the convent. We find out Barbara has left the convent to be a part of ’60s protest movements. Michelle, meanwhile, is still struggling with her feelings for John. The movie ends with everybody in church singing, and Michelle’s eyes darting from the statues of Jesus and Mary to John’s face—we do not know which she chooses.

What a waste of talent. Here you have a dream team of Mary Tyler Moore and Elvis Presley in what easily could have been the Viva Las Vegas of uplifting sociopolitical drama. Instead, it’s a half-baked after school special about nuns. I almost want to be nicer to this movie, knowing it’s Elvis’ last, but I just can’t help but be shocked at how insincere it is—especially in 1969, a year full of sincere and brutally honest cinema: Easy Rider, Midnight Cowboy, They Shoot Horses, Don’t They?, Kes, and Z, just to name a few game changers.

I know this is my cynicism talking, but the last thing anybody wanted to hear in 1969 was a sermon about we should try harder to be better within the confines of rules forced upon us from ‘higher powers’ (corporal or otherwise). This film is the literal antithesis of the year 1969—a year of revolt, disenchantment, and social revolution. And while this film does not have a chastising tone (I won’t completely throw it under the bus, as the nuns are all depicted as genuine people who want to do good), it certainly isn’t honest about its depiction of the ghetto, or its belief in social change. Plus, its message that good intentions can somehow fix socioeconomic barriers just comes off as completely tone-deaf.

Am I being too harsh on an Elvis movie? Sure I am. I understand this movie was meant to be a splash of optimism in a sea of pessimism. They do attempt to show a level of depth with the local neighborhood inhabitants—I like that one of the nuns attempts to organize a protest based on how unfairly she sees the local grocer treat his Hispanic customers. I liked that there was a semi-positive nod to the black power movement. Julio is shown to have become disturbed from his violent father who doesn’t understand his needs. And they throw a spotlight on the out-of-touch, racist old guard of white church culture. I’ll even say it’s well-intentioned to show that even after the attempted rape, Mary Tyler Moore’s character makes a point to not press charges against the troubled young man, for he knows not what he does (or something). These nuns are shown to do well by this community because they make an effort to know and love the people around them.

However, while all of the nuns grow as people, evolving in their understanding of themselves and their faith, the film drops the ball by implying that the neighborhood somehow evolves and betters itself from their influence. By the end of the movie, everybody’s in Church, the people learn how to better keep up appearances, the neighborhood girls learn how to dress like ladies, and heck, even the autistic girl is ‘cured.’ To imply that problems of poverty, violence, crime, and racism were solved simply with ice cream, carousels, touch football, block parties, and proclamations of love is simply a product of the insincere Hollywood model from a decade earlier. Their good intentions become a superficial band-aid over the gaping maw of social and societal wounds; the film’s attempted optimism quickly goes from uplifting to inert.

But, to change gears here, let’s focus on what we really came for—and that is Dr. Elvis Presley, M.D. This movie is, hands down, the hottest Elvis has ever looked—he’s thin, his side burns are killing it, his hair is gel-free, and he truly looks at peace. They say confidence is the most attractive quality in a person, and it sure does radiate outta Elvis in this one. Except, it’s a different type of confidence—this is Elvis at his most Zen. After the success of the ’68 comeback special and the renewal of his live shows, it’s almost as if Elvis has transcended his film career at this point. Just as the movie ends, with cuts between images of Elvis’ smiling face and Jesus’ face, Elvis, too, ascends to his heavenly throne of musical God canon—or something. I don’t know, sorry guys.

But really, it’s a pity this King Elvis Zen was wasted on this false prophet of a film, this Judas of a movie. (Okay, I’ll stop for real this time.)  Elvis finally gets that dramatic role he’s been desperately begging for, and his film career ends—ugh! What a shame too, because this ’69 Elvis shows such promise—which, we all know, of course, comes to a sad conclusion a mere eight years later when Elvis dies in 1977.

Best Song: The best song in this movie is easily the funktastic song “Rubberneckin’.” It’s just Elvis jamming in his apartment, but the energy is there at least. Then there’s “Have a Happy,” which, while painfully cheesy, is kind of worth it just to look at how attractive Elvis and Mary Tyler Moore are. 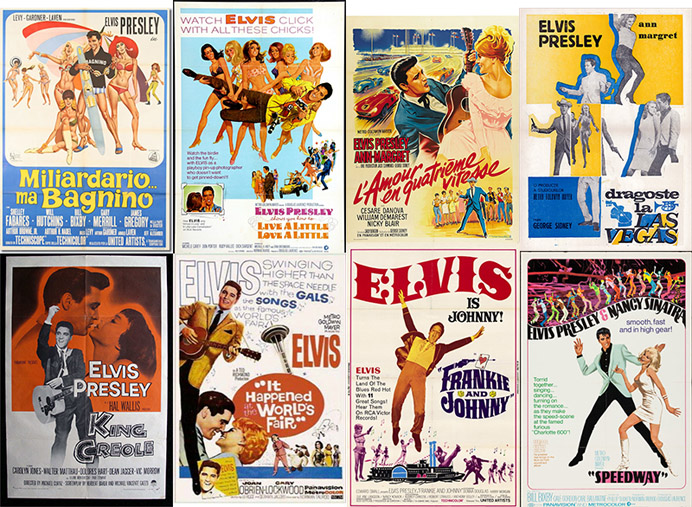 Well, that’s it folks. Elvis has left the building. But before I do as well, I’ll leave you with my complete and final ranking of all 31 Elvis movies from best to worst according to my star ratings, with some consideration given to my Elvis ratings. I hope you’ve enjoyed this odyssey as much as I did, and I’d certainly encourage you to give Elvis a second look if you haven’t already:

3. Wild in the Country

9. It Happened At The  World’s Fair

25. The Trouble With Girls