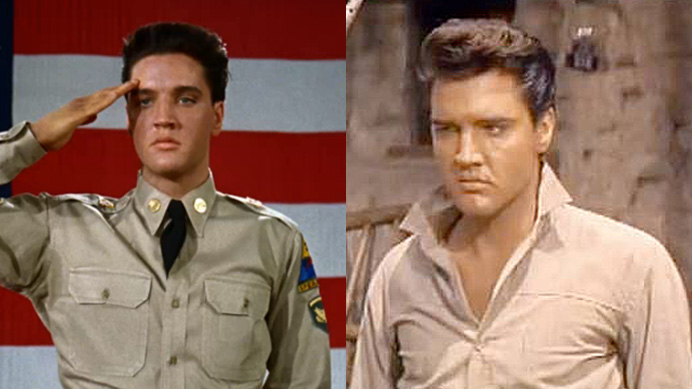 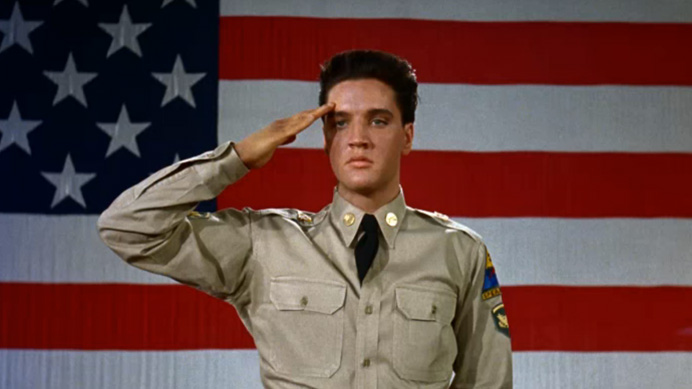 Elvis is back, baby, and this time with more stars and stripes, but less hips and swagger. This is the first movie Elvis made after coming back from the army, and from the non-stop parading of tanks and rah-rah army life cheerleading—plus Elvis looking the leanest and fittest he’s probably ever looked in his life—it certainly shows. It’s not a bad movie really, but we’re unfortunately back to bland, Loving You-esque storytelling.

This time he’s Tulsa McLean, a U.S. soldier stationed in Germany who dreams of opening a nightclub in Ohio once he gets out of the army. Starting a business costs money though, so what better way to get rich quick than by taking up an all-or-nothing bet with some of your army pals? Specifically, a bet that he can’t score a night alone with famed night club dancer and “ice princess” Lili (Juliet Prowse) during his leave in Frankfurt.

He and Lili hit it off, mostly due to his ability to say polite things like “Is this seat taken?” or “Where would you like to go?” and maintain eye contact, instead of just grabbing her by the waist and telling her to come home with him. And so they go on a number of dates that include a boat ride, a hike, a gondola lift, and a children’s puppet show. The more dates they go on, the more Tulsa’s guilt grows, as he actually starts to fall for Lili.

So, Tulsa calls the whole thing off, and instead of coming clean, tells Lili they can’t see each other any more because he’s a solider and she lives in Germany and he’s got big plans for nightclubs in cornfields, babe. But, when he suddenly finds himself having to babysit the love child of another soldier buddy—while said buddy runs off to get married—Tulsa discovers that he doesn’t know how to open a fridge door or not yell at crying babies, and thus must call up Lili to help him. With the baby in tow, Tulsa wins the bet sort-of, due to the two of them staying up all night trying to get the baby to sleep. Lili of course eventually finds out about the bet, and is angry—but not for too long, because Tulsa gets the army to be like ‘hey, we’re not cool with bets like that’ and Lili points out that he didn’t even win, since the baby was there the whole time. Everybody laughs and does a musical number.

At its worst, G.I. Blues is Elvis singing a German love song to a puppet with a chorus of german children as his backup. At its best, it’s a cute movie with a decently headstrong female character who doesn’t melt at the mere sight of Elvis. In fact, Prowse even delivers a pretty biting line when she realizes the whole bet situation, straight-up telling Elvis he isn’t as attractive as he thinks he is and walking off. Nice one, Legs McProwse. (I mean really, can we talk about Juliet Prowse’s legs? They literally go on for days. How is that physically possible?)

Elvis seems super subdued in this one—no swagger, unbridled confidence, or anger issues. G.I. Blues Elvis is just a sweet guy trying his best to fit in with the boys, but at enough of a distance that their unsavory morals don’t rub off on him. Hate to say it, but I kinda miss the crazy and abusive Elvis of Jailhouse Rock. Granted, he’s somehow gotten hotter, but his personality and spark have dipped. Even his musical performances are sort of tepid—he barely moves and just looks kinda bored. The songs themselves aren’t too memorable either—Blue Suede Shoes gets played, but for all of 10 seconds in a cheesy, meta, jukebox moment.

All in all, G.I. Blues is a disappointing comeback. The story is corny, the grit has been bleached away, and as a result, the characters are bland. And it’s further disappointing given that the affair Elvis was carrying on with Juliet Prowse behind the scenes was so salacious—she was Frank Sinatra’s gal at the time, who reportedly threatened Elvis to back off or be ‘dealt with’ mob style.

P.S. For a much better army bet movie, one with actual soul and depth, watch Dogfight, starring River Phoenix and Lili Taylor. 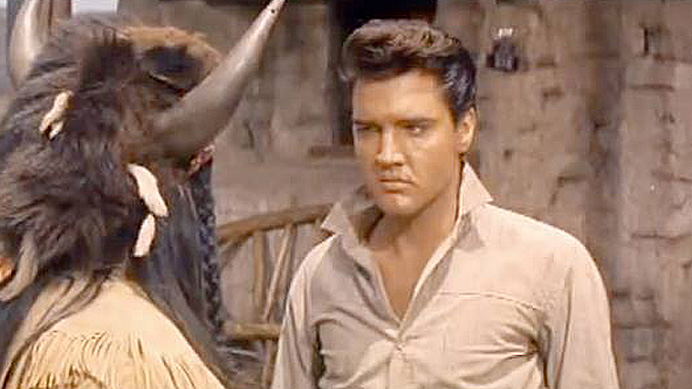 After G.I. Blues successfully rebooted Elvis’ film career, he wanted to try something more serious, something with real emotion—and so, western Elvis was revived.

Flaming Star probably has the most satisfying opening of any Elvis movie yet. It starts off with one of those big ol’ corny western birthday sing-alongs, with square dancing and accordion and whatnot, and you’re already looking at your watch thinking ‘Oh God, just kill me already, this is gonna suck’, but then, surprise—a twist out of nowhere that I won’t spoil that totally rules.

Elvis Presley is Pacer, born from a Kiowa mother and a white father. They live somewhere out in Texas on a ranch, along with his white half-brother Clint (Steve Forrest). Life’s pretty fine and dandy until some indians come and slaughter their neighbors. The town blames Pacer and his mother Neddie (Dolores del Rio) for being responsible for the deaths, because, y’know, racism. Meanwhile, the chief of the Kiowa, Buffalo Horn (Rodolfo Acosta) is actively trying to recruit Pacer to his tribe to help battle the white devils that are bogarting their land and killing their people. Pacer is torn, on one hand he’s lived his entire life in white society with the family he loves; However, he’s never been fully accepted, due to his heritage—a feeling that’s even more pronounced now that the town is turning on him even harder.

The final act of betrayal comes for Pacer after his mother is shot and the townspeople refuse to allow a doctor to ride out and check on her. Full of rage, Pacer decides to join the tribe, but at the stipulation that the rest of his family remain unharmed. Unfortunately, with more people joining in from other tribes and towns to help fight, Pacer’s father winds up shot and his brother injured. In the end, Pacer sacrifices himself, posing as both Kiowa and white in order to direct the violence away from his brother. After confirming his brother is alive, Pacer then rides off injured into the sunset to chase the flaming star of death.

This movie came out just a month after G.I. Blues, and due to its serious nature, lack of singing, and perhaps just an over saturation of Elvis, it didn’t do nearly as well. It’s sad though, because Elvis actually does do a pretty good job at acting. But then you think of the image of Elvis riding off into the sunset chasing the flaming star of death, and you can’t help but chuckle.  He just isn’t good enough for you to forget that he’s still Elvis. You can blame it on fame overshadowing performance, but personally, I think all they had to do was change his hairstyle and maybe give the character more depth, and it would have felt more natural. I’m genuinely torn because the movie isn’t bad, and Elvis isn’t bad, but it’s just not great either.

There’s a lot of potential in the film, but nobody really sticks the landings. Neddie wandering out into a desert storm after being mortally injured was an interesting scene. It’s rare you see women in 50s and 60s movies who get shot in the chest and keep on walking—even if it is to follow their dying visions of the flaming star of death. But even then, it gets undercut by her funeral, where her husband delivers a loving epitaph reminiscing about the early days that takes a pretty steep downward turn when he mentions he “bought Neddy as a young girl.” Wow, way to take the romance out of it, guy.

Same with most of the Kiowa scenes—everybody is overly stoic and lacking in the humanity the movie seems insist they have. The scene of Elvis sitting by the fire explaining simple science to the tribe really walks the line between patronizing and lost-in-translation amusing. Not surprising for a ’60s cowboy flick, but also not as cringe-y as it could have been—good job not being too racist, ’60s racists.

Elvis riding off into the sunset to die is also way too cheesy of an ending. If they really wanted to hammer the point home of how screwed up society is, they would have ended with Elvis shooting himself in the head, perhaps after taking out a buncha white guys—but, alas, I don’t think the teen fans would have been too happy with that.

Best song:  There’s thankfully no goddamn out-of-century singing in this movie, so take this montage I found of footage from the movie and the title song played over it.