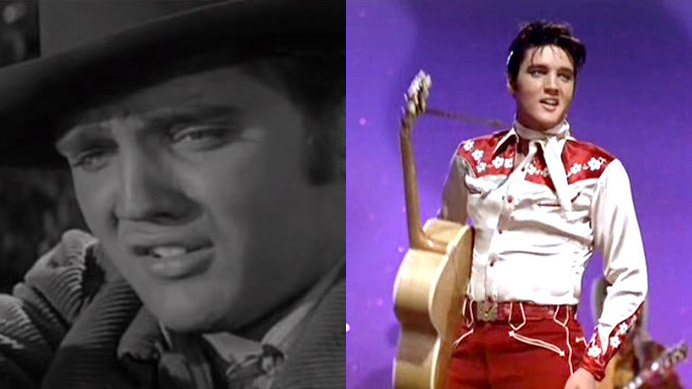 You ever just wake up one morning and decide to embark on a journey of watching every Elvis movie that ever came out? Well, that happened to me the other day, and guess what, you’re coming along on this ride.

I grew up in a pretty strictly Beatles household—I’ve seen A Hard Day’s Night, Help, Yellow Submarine, Magical Mystery Tour, and Let It Be more times than I care to admit (not to mention How I Won The War, Caveman, The Magic Christian, The Rutles… you get the point). Without hesitation, I can say I genuinely adore them all in their own ways. The Beatles set a pretty high bar as far as music movies go, both historically and personally for me–A Hard Day’s Night remains one of my favorite movies of any genre. It’s a charming, iconic, laugh-out-loud piece of film. Even a movie like Help—which The Beatles have admitted was completely phoned-in while high—has a really memorable set, some genuinely funny moments and, of course, great music. So I’ll admit, right off the bat, I’m not expecting too much from Elvis. The bar is just too high.

As opposed to The Beatles, Elvis has always seemed gimmicky to me as far as big iconic pop stars with obsessive fan bases go. When I think of him, I think of the old Spencer’s Gifts type knickknack stores with black velvet paintings, peanut butter banana bacon flavored things, and those clocks where his hips move side to side as the second hand. Current pop culture also tends to remember Elvis not in his prime, but in his decline—the overweight addict who died on a toilet in an on-stage costume one assumes he never took off.

However, the older I get, the more I find myself appreciating him—not for what his tacky fans turned him into, but for who he was. First off, Elvis was genuinely very attractive; it’s incredibly hard to pull off a rhinestone jumpsuit with a cape and still look like the manliest guy in the room, but he definitely did it. There was also something about how he moved—Elvis really owned the concept of performance in a way that most white men at the time were afraid to (and perhaps still are) lest they seem ‘gay’ or ‘feminine’ (y’know, god forbid). I think women appreciated that about him. Elvis wasn’t afraid to get up there and lose himself in a moment. Toss a knowledge of great gospel, blues, country, and boogie-woogie in there, and it’s hard not to see the appeal. I also think Elvis really symbolized a type of coolness unique to the South—what’s not to love about a rough-and-tumble mumbling kid who can’t control his legs when a great song’s on the jukebox?

So, enter with me now into the world of Elvis’ acting career—there’s 31 films in total and I’ll be going in order from first to last for as long and as often as I can stand to. I’ll be giving each film a star rating, but also, an Elvis rating, so you know which one have the most Elvis-y enjoyability. 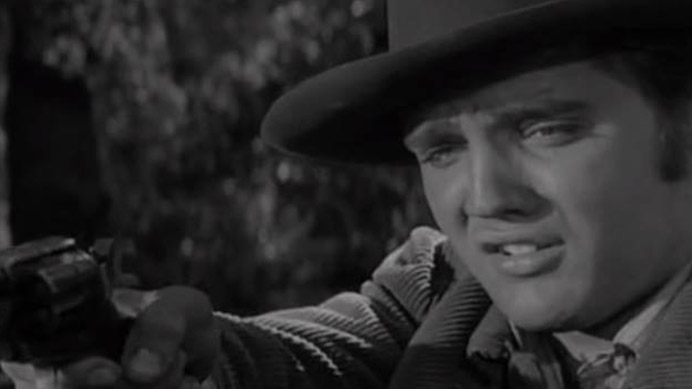 Alright, here we’ve got Elvis’ first film… and already a disappointment. This is less a movie about Elvis and more a bizarre movie about Confederate soldiers and a love triangle. The movie actually revolves around Vance Reno (Richard Egan) and his brothers—Confederate soldiers who, after robbing a Federal train, realize the war is actually over and the money is therefore stolen property. Even worse for Vance, upon returning home he realizes his old flame has married his younger hothead brother, Clint (Elvis Presley) after having heard erroneously that Vance died in the war. The rest of the film is about Vance dealing with heartbreak and making the decision to Do The Right Thing and return the money (you know, after the sheriff rides in and says he’ll arrest him if he doesn’t).

Why oh why anybody thought ‘Hmm, what’s missing from this movie that takes place in 1865—oh, I know, Elvis!’ I can’t tell you. It’s not even just that they cast him—he was popular, I get it—but it’s that they cast him and then had him straight up just do Elvis songs in 1865. And while these are not bad Elvis songs by any means (Love Me Tender is a classic, c’mon) they are really out of place in this movie.

Elvis in general is just out of place here. For one, he looks nothing like his brothers, and while he was actually only 21 at the time, he looks too weird to be the younger brother. I don’t know what it is, but to me, Elvis is just one of those guys who looked 35 his entire life, and that worked for him as he aged and stayed timeless, but it was sort of disorienting when he was younger. Or maybe it’s just that he looks so out of time, his futuristic face makes him look older than everybody else with their squinting eyes, scruffy faces and sandy hair.

Elvis is also essentially a bad guy in this movie, which I feel is a bizarre choice if you’re hiring him in order to bring in the crowds—don’t make the seat-seller into the guy you’re meant to be rooting against. In the end, Vance is really the hero, while Clint is an immature, kinda-slow wife beater who apparently is really open to anyone’s suggestions except those of the people he knows and loves. Best scene is in the last half of the movie, where Elvis’ quivering upper lip matches his nervous shaking hand while he aims the gun at his brother in a jealous rage. As he wrestles with the psychological torture of coming to terms with the idea that both his favorite brother and wife might have lied to him, you just can’t help but think ‘Uh-huh-huh’.

I’m sure as I get further into the Presley movie madness I’ll be at a point in which I miss the idea of 1800’s Elvis, but for now, eh, not doing it for me.

Best song:  ‘Love Me Tender’ I guess, though it’s kind of a weird scene—he sings it to his mom and brothers on a porch in the country. 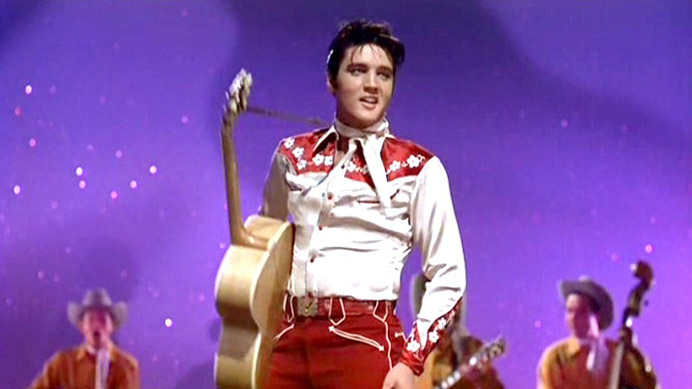 Ah, yes—the first in what I can only assume will be many Elvis origin stories in which he plays a scrappy rural nobody kid who climbs his way to stardom by overcoming his insecurities, and of course, putting in some goshdarnit hard, honest work.

In this movie he’s ‘Deke Rivers,’ and he’s rising to fame with the help of a snappy-comeback-McBlinks-a-lot publicist named Glenda Markle (Lizabeth Scott) and her country-western styled ex-husband Tex Warner (Wendell Corey). Long story short, Deke becomes a smash success for his swingin’ hips and rockin’ songs, and Glenda exploits his bad boy image, which helps his career but causes some tension with Deke and Tex. I’ll be honest, I wasn’t totally clear on exactly why Tex kept being weird—he was definitely profiting off of Deke’s success, but I guess there was some weird jealously where nobody knew just how much Glenda was into Deke or something, even though Deke clearly just had mommy issues.

The worst part of this movie is probably just the fact that his name is Deke Rivers. I know Elvis is an unusual name, but Deke? Deke Rivers is most definitely a kid I want to beat up for his lunch money, not a sex symbol rock’n’roller. C’mon. Even worse, it’s revealed that Deke Rivers isn’t even his real name—it’s one he adopted in order to cover the pain of loneliness he experienced in the past. At that point, there’s no excuse. You have no excuse, you coulda been Octavius P. Missile-Silo, or heck, just kept Clint Reno from the last movie… but yeah, whatever. All right, “Deke.”

Anyhow, this was exactly what I expected from an early Elvis movie—no thrills, no horse chases, no Confederate soldiers, just Elvis looking good in some fly-ass western wear and a custom white convertible with a red leather interior. I also enjoyed how it was shot; that typical 1960s technicolor stage play look is always warm and inviting. As a film, it’s corny, but not in an offensive way. The whole movie is a cliché, from Deke’s evolution as the angsty, orphaned teenager to insecure nice guy that gets flustered around girls and really just wants to settle down on a farm. It’s entirely unbelievable but Elvis keeps the charm.

Best song:  I dug the ‘Lonesome Cowboy’ performance. There was a little artistic flare in how they shot it—kind of a proto-music video style, with moody stage lighting and Elvis giving it his all. Also dug his outfit, and the mood-ruiner chick who inappropriately yells out something like ‘You can come to my house, honey!’ during a lull in the music.

Forward to Jenna Does Elvis #2