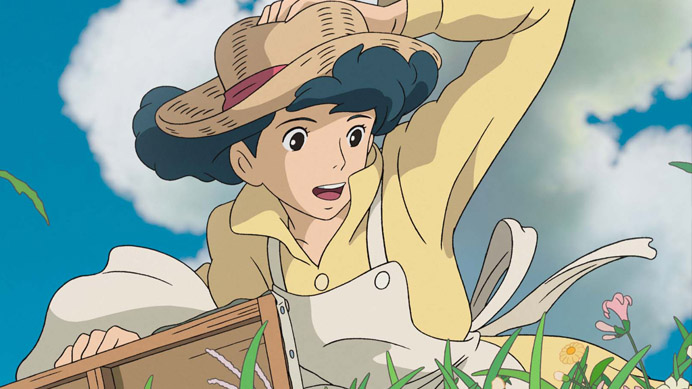 I watched 71 films this year! More impressively, 29 of those films actually came out this year! That might be a record for me, seeing as I mostly seek out movies that are over thirty years old. Man, 29! I’m not going to even think about how much money that was.

That said, 2013 was a year of ‘meh’ for me, as far as new releases were concerned.  I felt let down by a lot of the big buzz movies: 12 Years a Slave was superbly acted, but felt disjointed; Gravity managed to not excite me visually or emotionally; Frances Ha just felt like Baumbach’s version of Girls; Elysium was a snooze fest where I found myself rooting for the bad guys because they at least had more character. I was also excited for both Star Trek: Into Darkness and The Hobbit: The Desolation of Smaug, and while neither particularly disappointed me (well, the whole Star Trek reboot I’ve always had issues with, but whatever) they didn’t excite me either.

I was, however, surprised by a couple of movies I saw on a lark: The Bling Ring was surprisingly watchable, Saving Mr. Banks was genuinely well done, Blue is the Warmest Color wasn’t entirely French junk, and The World’s End was a ton of fun. I also would include Wolf of Wall Street in this category, but I’ll be expounding on that one at a later date. [Update: Here you go.]

So, here’s my list of the best and the worst, aka, the movies that, at the very least, made me say something other than “Meh.” 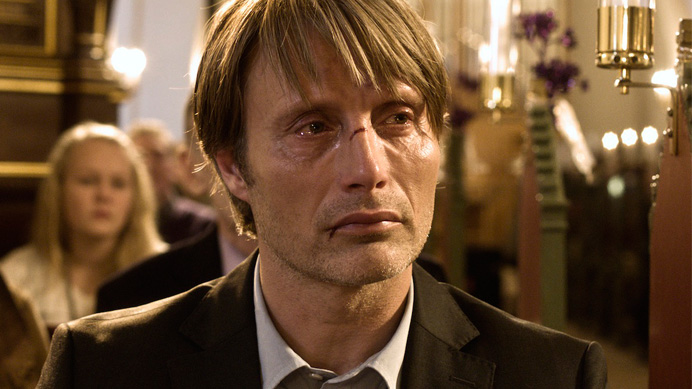 I saw this movie because a friend of mine is obsessed with Mads Mikkelsen, and ehh I like foreign films.  I went in blind, and left pretty damn impressed. What I like most about this movie is its portrayal of children.  I appreciated its upheaval of the concept that all children are somehow intrinsically ‘honest’ or ‘good.’  Thomas Vinterberg does a great job of getting into the psychology of children, and showing them for what they are: cyphers of their parents insecurities and problems. I think there’s also a strong message about small town living in this, but that might be my native New Yorker bias talking.

I appreciated the honesty Vinterberg had towards his audience. There’s no BS movie tricks and twists—it’s all very straight forward and real, which has just as much momentum and weight as the ‘tried and true’ method. Great acting all around, too… in all truth, I think European child actors are always superior to their American counterparts. 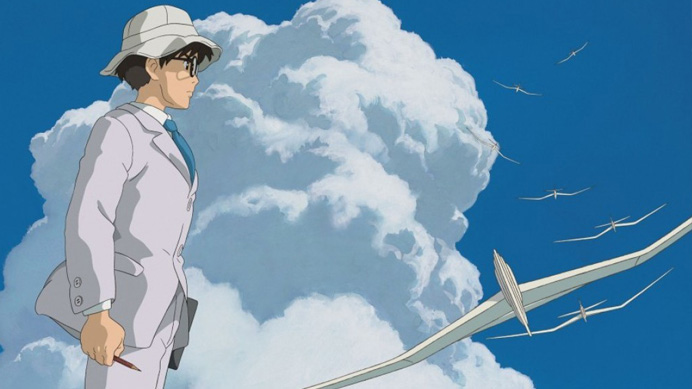 I adore Hayao Miyazaki, and so when I heard this would have a week-long limited run, I knew I had to check it out. It’s actually very different from a typical Miyazaki movie—a little more grounded, straightforward, and with a male protagonist(!). What really stood out to me was how incredibly sweet and loving it was, considering it was written up as having a theme of ‘dreams versus reality’—specifically, protagonist Jiro Horikoshi’s love of flight and design versus the inherent violence in the bomber planes he’s developing.

In my opinion, the emphasis is mostly on the love story between Jiro and his wife Naoko. The entire movie has a nostalgic and beautiful air to it—less a story of philosophical debate, and more one of love and devotion. I’ll admit, I was a little disappointed in the lack of magical creatures (though there are some great daydream sequences) since this is meant to be Miyazaki’s last. But that has more to do with my expectations than anything else. The Wind Rises is mature and well crafted—yet again another masterpiece from a modern master. 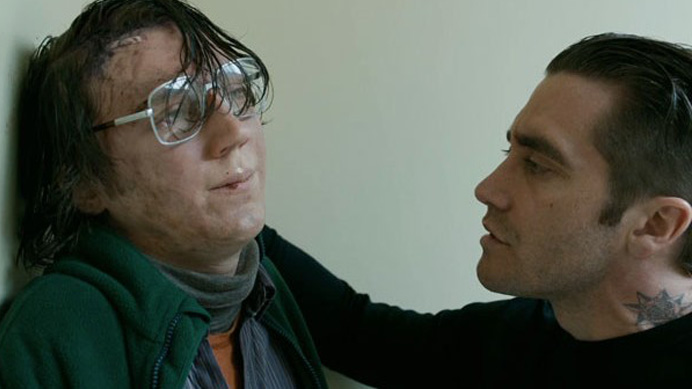 I went to see this movie on a total lark. I had three hours to kill and nothing else playing would’ve let me out at the right time. And man was this an absolutely vicious movie!! Cold, cold, cold—not only in subject matter, but in theme and general outlook. The tagline for this movie should have just been “Everything is horrible and then you die.” That said, I’ve gotta hand it to any movie that can leave me speechless like that, even when said speechlessness is out of the pure shock one experiences after staring into what feels like the overwhelmingly empty void we call life for three hours.

The movie itself is actually kind of simple—a plot that’s worthy of a Law and Order episode, really—but it always manages to dodge the obvious routes with some interesting twists. I was also really impressed with Jake Gyllenhaal’s performance—I’m disappointed he hasn’t been nominated for any awards, because I thought he was a real shoe-in. He really managed to flesh out a character that we, as an audience, get almost no explicit information about. Between his tattoos, twitches, and volatile temperament, Gyllenhaal is easily the most interesting character in the film.

I adore the Coen brothers, and the second I heard they were doing a movie based around the 1960s folk scene in New York, I knew that there was no way I’d dislike this movie. So I mean, disclaimer: this was absolutely my most anticipated movie of 2013. And it did not disappoint.

Just fantastic, strong, and depressing—the kind of film you don’t even realize is affecting you until it’s over. Llewyn is less about the early Folk scene and more just about the rich and complex characters that populated it, wandering through life dealing with confusion, hope, and grief.

The Coen brothers are the kings of subtle emotional exploration through simple dialogue or otherwise mundane situations, and some of the most emotional scenes in the movie have to do with dinner parties, freeway exits, conversations on couches, and cats. Oscar Isaac is impressive throughout, and deftly walks the line between major jerk sad sack and sympathetic, sensitive artist. Plus, the music is fantastic, and no performance ever feels superfluous. It not only helped move the story along, it aided in character development. Loved it, A+, 4 stars. 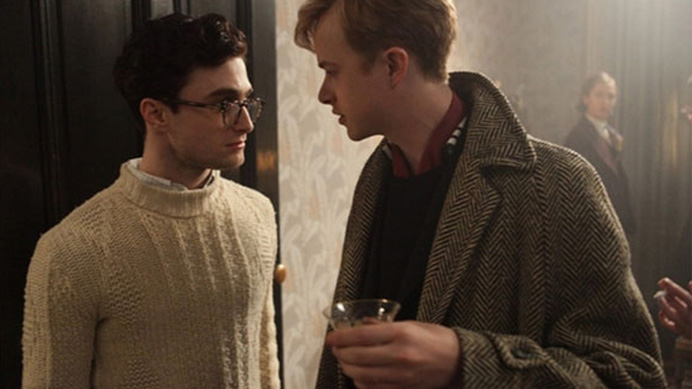 This movie was just disappointing for me. At its worst, it feels stagy and made-for-TV-esque. At its best, you think it’s just about to turn a corner—but it never really does.  Overall, watchable, but certainly disappointing. I mean, if I’m gonna be honest, I expected a level of cornballness, but I really wasn’t prepared for the outright subpar dialogue and acting. You’d think, given the literary superstar subjects, they’d at least tried to raise the bar a bit higher than Lifetime worthy melodrama. Also, they spend a lot of time trying to make Lucien Carr out to be a homophobe fuck-up, but David Kammerer comes across as such a stalker creep that it’s hard not to side with Lucien. I’m not too sure why this was told through Ginsberg’s perspective either. All in all, kind of a mess. 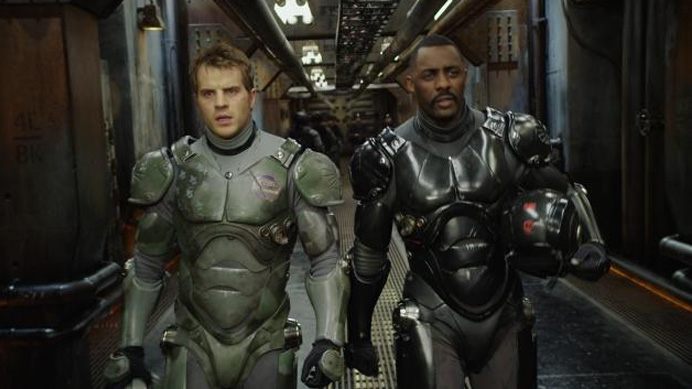 Okay, I’m pretty sure we all know what we’re getting into when seeing a movie like Pacific Rim, but damn, this could have been mindless and fun, but instead, it was just mindless and boring as shit. The dialogue, the characters, the plot—everything in this movie just flat out stank. That scene with that Australian dude and his dad was so hard to watch—not because it was emotional, but because it made me want to bite my fist it was so cheesy and bad. I mean, I didn’t care about any of the characters really. Charlie Day and Burn Gorman, as the two bumbling scientists, were perhaps the only watchable characters, and even they were perilously close to being just boring, cartoony cliches.

Maybe if this has been knocked down to an hour and a half, and they took out all of the BS character development that nobody cares about, it coulda been a solid action flick. I’m down with giant nation-themed robots and mutant animal-themed monsters, but enough with the dressing it up as if it’s some amazing epic—it’s not and it wasn’t. So stop spending your time anticipating your popularity, Guillermo Del Toro, and write a goddamn watchable movie for once. Too much atrocious acting and dialogue, not enough robots punching aliens. 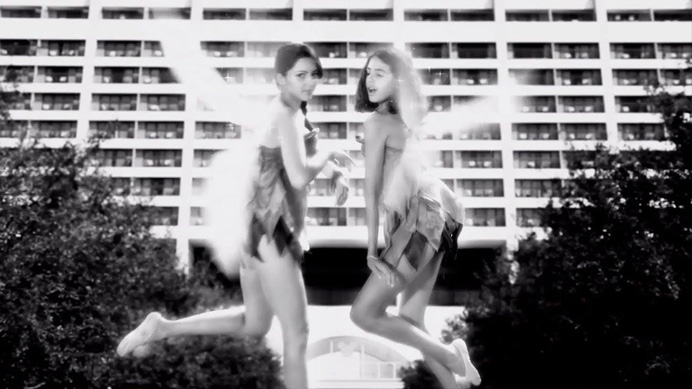 What more can I say that I haven’t said already?

I had high hopes for this movie, and it totally crapped the bed. It starts out as kind of an interesting character piece about a loser dad and his escapist fantasies, but then just dissolves into a random, ‘fuck you’ to Disney without any coherent rhyme or reason. It had about the maturity level of a high school student with blue hair smoking in a playground. I was hoping for surreal, and instead it was just a very disappointing B movie. I liked the scene with the It’s A Small World ride, though. 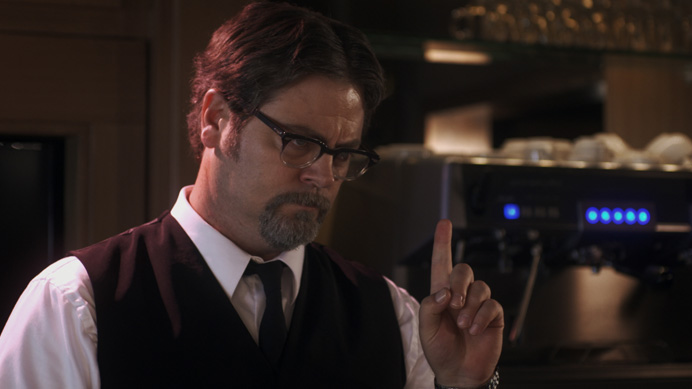 Absolutely the worst movie I saw in 2013. I ended up at a screening of this because my friend is a big fan of Nick Offerman. I might have liked this one had I laughed or even cracked a smile at all during it, but I didn’t. Not once. I found it to be pointless and pretentious, and during the Q&A afterward, the director’s smug, ‘cooler-than-thou’ answers basically sealed my opinion.

It’s a movie about a guy who drifts through life, completely detached from the concept of living—with the vibrancy and excitement of a Camus novel, this deadpan, expressionless protagonist gets a job, meets a girl, gets married, cheats, falls apart—wash, rinse, repeat. And maybe that is meant to be a cool kind of time-travel concept, or a statement on the banality of the events that society expects you to care about and blindly follow—sure, fine. But that detachment backfires, because as a viewer, you feel just as detached, and start question why you’re even in this movie theater watching this badly directed waste of time. Also, all of the pointless nudity felt like such a cop out gimmick to keep you more interested in the otherwise plotless plot. All thumbs down. This movie was a fart noise.