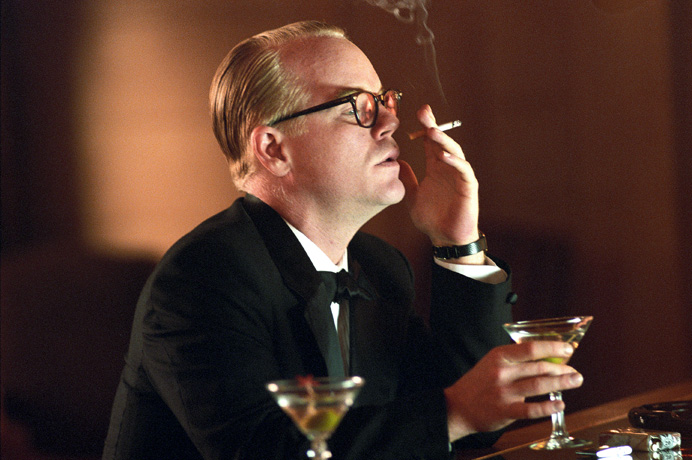 John D’Amico: 63 roles in 23 years of acting. Where do you even begin? He absolutely hummed as Lancaster Dodd in The Master, as Lester Bangs in Almost Famous. He has about a million solid movies you kinda forget about until you look at the long scroll of his filmography. How about State & Main? That was a very fun one, uplifted by his ability to be both campy and deeply believable at the same time. He elevated otherwise listless projects like Pirate Radio and Patch Adams—Jesus, he was even good in Patch fucking Adams! Watching Hoffman, even in a bad movie—hell, especially in a bad movie—you feel his talent almost as a physical presence in the room, a rush of light illuminating himself and everyone else.

I think the first time he caught my eye was in Capote. Remember that one? It came out when I was in high school, just as I was starting to understand that film is a difficult thing people create and not just a sort of wonderful life constant. That was that post-9/11 slump when it felt like nobody was quite ready to put themselves, heart and soul, into a film. It felt like none of my favorite movies were new, none of them were achievable in my life. It even felt for a few years like you couldn’t make a good movie anymore. Looking back, that’s ridiculous—there were a ton of good movies out in those days, but somehow I didn’t see them.

But I saw Capote. And I don’t know how it holds up now, I haven’t seen it since it came out. It’s been almost a decade. Capote was like a promise being fulfilled. It was like someone came right down to my seat in the dingy little theater and said “We still make good movies.” That’s all on Hoffman. Look at this scene, one of those Scenes Of Your Life, those things you can barely contextualize but still remember feeling in that room, alive, watching these living people:

They say genius is the ability to hold two opposing opinions at once. Hoffman’s face in Capote must be a genius—it constantly holds two opposing emotions at the same time.

Antoine de Saint-Exupéry said in his masterpiece Wind, Sand and Stars of death: “Never again will be heard exactly that note of laughter, that intonation of voice. Each individual is a miracle. No wonder we go on speaking of the dead for twenty years.” Twenty years is about what we got from Hoffman, and it was enough to ensure he’ll last longer than that for us. It’s a bitter pill with a man like Hoffman. I needed that miraculous quality. I’m not sure my life would be the same if it wasn’t for his talent. It made me want to be talented. It made cinema feel approachable, doable, livable.

There’s not really anything I can say about addiction, about acting, about grief, or about the life of Philip Seymour Hoffman that you haven’t heard before and better. But I liked Capote. 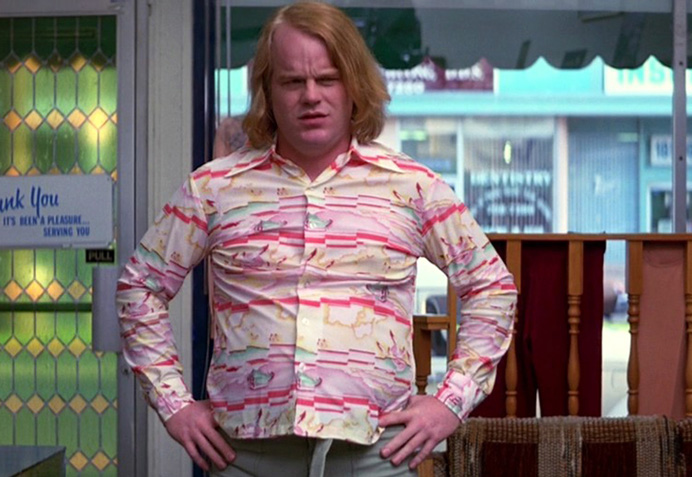 I was torn, because these meek, schlubby characters they played aren’t heroes, and that kind of bothered me. But they’re great actors, and certainly deserving. Ultimately though, I’m a fan of the ‘leading man’—from Harrison Ford to Michael Keaton to Kevin Costner, these guys could really command a movie. They were heroes and everymen all at once. They were likable and accessible, yet above all else, larger than life.

As I write this, it dawns on me that the same thing happened in the 70s with Dustin Hoffman, De Niro, and Pacino, who are all also great. Especially Dustin, who comes close to Tom Hanks as the greatest actor of all time. Close, I said.

I’ve always been annoyed when people talk about ‘range’. I don’t watch Bill Murray for his range—I watch Bill Murray to be brilliant as Bill Murray. He’s good in Mad Dog and Glory when he beats up De Niro as the against-type bad guy, but who really cares? I’d rather watch an actor do what they’re truly great at. Most actors do not have range, and I welcome that.

Phillip Seymour Hoffman was the only actor I ever appreciated for having range. And I always loved him, even from early on. I guess it started with my teenaged obsession with Boogie Nights. His character was very small, but he was great. And then you realize that’s the same fucking guy who plays Brandt in Lebowski, and your mind is blown. Think of State and Main, The Big Lebowski and Punch Drunk Love. In one he’s a confident, outsider type; in another he’s a nervous, fast talking follower; and in another he’s a weird ass tough guy. That’s fucking range.

But range is one thing—the best compliment I could ever bestow onto any actor is what I will say now about Philip Seymour Hoffman, without hesitation: when he’s on screen, you forget it’s him, and you just see the character.

Fuck, man. It’s really, really sad. I truly loved your work, Phil. In fact, I find myself tearing up. You are the first of my truly treasured artists to die in my lifetime. I was a little kid watching you in Scent of a Woman, Twister, and Leap of Faith. My formative years were your unforgettable works with P.T. Anderson. And just two years ago, you fucking killed it in Moneyball. 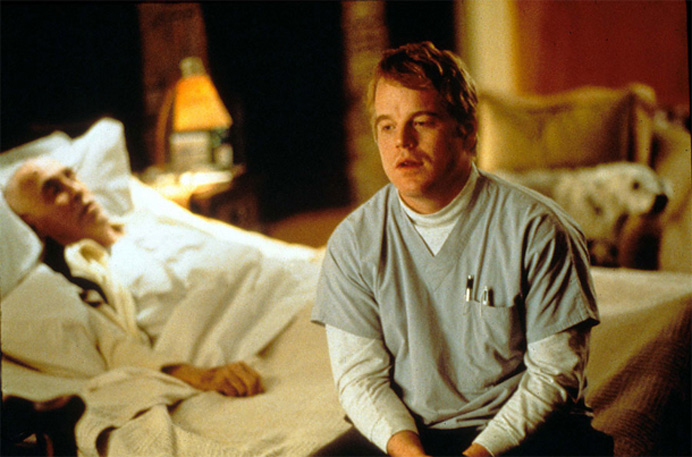 Jenna Ipcar: I first began to take notice of Philip Seymour Hoffman when I saw Magnolia. While I wasn’t thrilled with the movie itself, I was absolutely stunned by his performance. It managed to bring me to tears. This was especially impressive to me because his role was pretty small, and his character’s purpose was basically to be conduit. But he imbued the character with such raw sincerity and pure empathy that he managed to steal the entire movie.

That genuineness is what made Hoffman stand out—it drew me to seeing movies I might otherwise have ignored, simply because I knew he was in them. From the closeted, insecure self-hatred that he absolutely nailed in Boogie Nights, to the effortless cockiness in Capote, you always got the sense that here was an actor who truly embodied his characters. A real, honest-to-god character actor. I regret not making an effort to see him on stage, because I’m sure his energy was just as powerful in person.

Unlike, say, Peter Sellers, you always got the sense that Philip Seymour Hoffman the man was there. Through his love and empathy for his characters, you always felt as thought you understood him. This might be what made his death so shocking—the idea that he carried enough hidden pain to abuse himself in the way he did. How could we not have realized, when he seemed so in tune with our pain and our emotions? Obviously, it’s ridiculous to act as if a spectator could know anything about the life of a stranger—especially a celebrity—but I think it goes to show that he was just that damn talented, to be able to hide it all from us, yet at the same time, show us it, with every role.

I’m absolutely going to miss him.