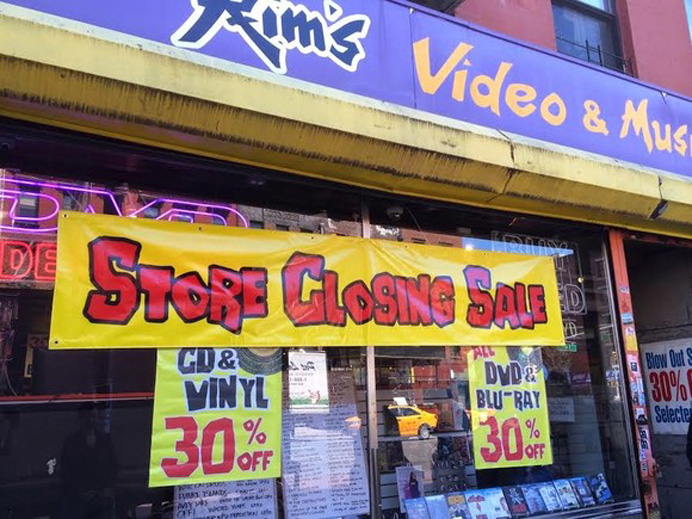 However, I’ve never had much interest in Kim’s, and I’d be lying if I said I care at all about its imminent closure. I’ve lived in this city all my life, but I’ve been there maybe twice—they’re overpriced, and I’m a deal hound. And although Eddie Huang’s recent eulogy to the store is brilliant, and does tug on my heart strings somewhat, I honestly don’t see this loss as much of a blow to the city I love, or its cinephile inhabitants. There has never been a better time in history to be a film fan, and there have never been more or better “portals”, as he so aptly puts it.

For starters, one must address the biggest portal of all, the internet, and the various archives that exist on it, legal and illegal, where you can be watching rare flicks in a matter of minutes, sometimes seconds. I remember that, for a while, John D’Amico and I had long been having trouble tracking down a copy First Love, the 1977 film directed by the incomparable Joan Darling, who he recently interviewed for the site. We weren’t able to find it before the interview, so he unfortunately couldn’t ask her much about it, but then yesterday, I discovered that it’s streaming for free on Archive.org, one of our absolute favorite sites. If you’ve never explored it, do yourself a favor and do so. Chances are you’ll stumble upon a film you’ve wanted to see for ages.

YouTube is also a hell of a place. Contrary to popular belief, it’s not all cat videos and vloggers that jump cut so much they make Jean-Luc Godard look like Cody Clarke. It’s a treasure trove of films whose rights have lapsed, are unavailable on any format, or just ones where the distributor is asleep at the wheel and hasn’t noticed it’s on there. If you’re looking for a starting point, last year, John put together a great list entitled 10 Great YouTube Movies You May Not Have Seen.

But enough about the internet. The city losing its landmark is also full of incredible portals. Book Off is lightyears better than Kim’s, and cheaper too—they mark almost all their DVD’s at $5 or less, whether or not they typically go for more, and a fair amount of their CD’s at $1. It’s great fun to browse their stacks—you never know when you’ll stumble on a long out of print title that you never would’ve been able to afford had you been at Kim’s, or been trying to buy it online.

Let’s say though, that you’re a cinema-obsessed New Yorker who doesn’t have five dollars to spend on a movie. Let’s say you don’t have any money to spend on them at all. You’re still not out of luck, because you still have access to the greatest video store that has ever existed—the public library.

When I was a kid, the library was the shitty place to rent a movie. When my Dad was broke, he’d take me there instead of the video store, and I’d have to choose a tape I wanted to watch out of twenty or so that were all pretty lame, most of them somewhat educational (yuck!).

Nowadays, the library is the fucking shit though. They have tons of movies, including ones I can’t find anywhere else for a reasonable price (Riding the Bus with My Sister, The Love Letter) and ones I hadn’t even heard of until I stumbled on them there (Soundtracker, Rockstar [not the Wahlberg one]). Even better, you can take out ten DVD’s at a time, each for seven days, all for free. And if you wanna keep them out longer, you can just renew them online, unless someones has a hold on one of them. You can also place holds online, and they’ll ship the DVDs to your closest branch. Plus, late fees are only a dollar. It’s everything you could ever want out of a video store, and I go there every week and come out of there with a full bag.

It gets even better though.

The library is also the greatest movie theater.

If you go on the NY Public Library website and search, for instance, for the 1985 Eric Mitchell film The Way It Is (which boasts early performances from Steve Buscemi, Vincent Gallo, and Rockets Redglare, and has never been available on VHS or DVD) you will discover that they have it available on 16mm film. If you contact them, you can arrange a personal screening of it at the library, absolutely for free. You can even bring friends, so long as they also have library cards. You can do this with any movie they have a film print of.

At one point in time, Kim’s Video was as awesome to cinephiles as the aforementioned places are to us now, because it was really the only place you could get rare and interesting films. But its time has passed—it is no longer useful or exciting. Those who have been lamenting its passing are really lamenting the idea of it more than they are lamenting the actual ‘it’. The idea of it—its soul—is still very much alive and well, and has expanded well beyond Yongman Kim’s wildest dreams. Go experience it, whether with your laptop or your feet.

4 thoughts on “I Don’t Care That Kim’s Is Closing, And You Shouldn’t Either”