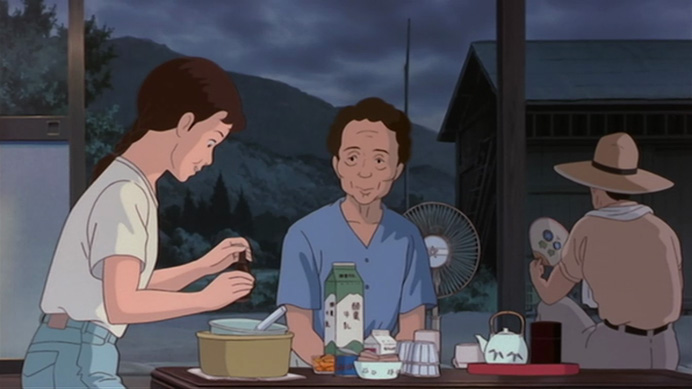 I kinda hate Dragon Ball Z. And Sailor Moon. And Pokémon. Not because any of them are particularly bad or anything—they’re Saturday morning cartoons, so who cares. But their ubiquity in pop cultural memory has forever colored our impression of anime at large. The great big sparkling eyes and the spiky hair the hyperviolence and the hypersexualized portrayal of girls and the over the top melodrama and the overbearing cuteness are all things seen as inseparable from the medium itself.

Really, these traits only saturate the bottom of the barrel, and it’s a shame that for the longest time most Americans haven’t been exposed to anything to set those misconceptions right. Companies like Disney and Cartoon Network have done some good in licensing and/or airing shows and movies, from Cowboy Bebop to Spirited Away, that fall outside the stereotypes’ mold. It’s not as bad as it was in the early 90s. But still, most people stay away from anime unless it has the name Miyazaki attached to it. And those that do venture in rarely venture very far. Franchises like Death Note, Fullmetal Alchemist, and FLCL are popular in the states, but this is still kid’s stuff (no offense). Too few self-styled anime fans are interested in the maturer end of the spectrum, and a lot of people are convinced there is no such end of the spectrum at all.

Many otherwise open-minded people can’t get over some of the barriers to enjoying anime. The animation features significantly fewer frames than American animation, and so it moves with a stutter that some people find really jarring. And some people don’t like the frequent use of internal monologues. (You’ll be hard pressed to find an anime that doesn’t feature them—though they are notably absent from many of Miyazaki’s films.) Dubbed English voiceovers are almost universally awful, and some people abhor the chirpiness of Japanese voice actors. And even official subtitles are never perfect, so invariably there will always be awkward dialogue at times. But you should try your best to get over these technical and stylistic prejudices, because the content is often very worth it.

I can’t possibly cover everyone who’s worth covering, but here are a few of my absolute favorite anime auteurs—none of whom are obscure in the world of Japanese animation. But aside from a few, I doubt most general audiences will be familiar with them or their work. These filmmakers are my answers to the question “Isn’t all anime for kids?”, a question nobody asks but everyone assumes is true (the answer is ‘no’). These filmmakers make movies for grownups, and that’s who I’m interested in enlightening. Fuck off, kids.

All these filmmakers have worked on movies, television shows, and OVAs (anime’s equivalent to straight-to-DVDs) but I’m going to focus mostly on just their best movies. Please note that I’ll be leaving a lot out, as all these filmmakers have large and diverse catalogs. I’ll include the works of theirs I feel are either really good or really representative—not everything any of them made is both. This list is by no means an exhaustive account of every important anime movie ever, either, and I encourage the curious to hit the internet and start digging, because anime is an ocean of content, and there’s quality stuff buried everywhere.

(Disclaimer: Yes, I know Hayao Miyazaki exists. Yes, he has made more than a couple timeless masterpieces. Yes, he is the grandest master of Japanese animation. He is its Steven Spielberg. But errbody knows that already.) 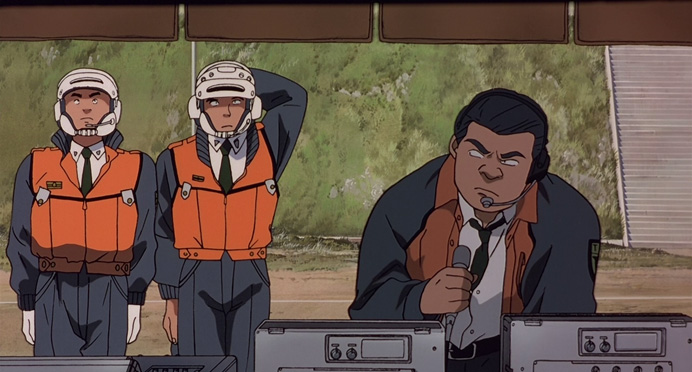 Mamoru Oshii is the Andrei Tarkovsky of anime. His movies are the most cerebral and the most sluggish you are likely to find. His adaptation of Ghost in the Shell is considered by many to be among the best anime films released in the US, and I certainly agree with that. It’s a uniquely quiet, thinking person’s action movie with no parallel in American movies (that I know of) and an indispensable piece in the development of the cyberpunk aesthetic. Its story takes big cues from Gibson’s Neuromancer, featuring rogue A.I.s and computer warfare, and culminates in a breathtaking cyborg vs. walking tank showdown that is as restrained as it is badass. Oshii loves hard sci-fi technology, and his movies bleed with inspired designs, yet they almost completely lack action. They’re slow and talky. But when the action does come, it’s so fucking cool. Check it out, but skip the “updated” version, Ghost in the Shell 2.0. It replaces a lot of the beautiful hand drawn background stills with awful, transparently CG backgrounds that jarringly clash with the original animated characters.

Everything I love about Ghost in the Shell I also love about two of his earlier movies, Patlabor and its sequel. These are both independent stories that borrow the characters and universe of Patlabor: Mobile Police, a series he helped create. They follow a wonderfully down to earth and subtly comic group of mech-piloting police officers as they unravel city-threatening techno-conspiracies. The plots aren’t anything totally original, but everything else about these movies is just spot on. The focus is on the characters, not the robots—which show up only a couple times in each movie—and the characters are real and sarcastic and sympathetic and droll. They’re just wonderful. The cast of characters make the Patlabor OVA and series some of the most delightful watches in anime. The near-future look and use of music and action-to-headiness ratio that he literally perfected in Ghost in the Shell are all evident in these two forgotten classics. Check them out, all are available on DVD. 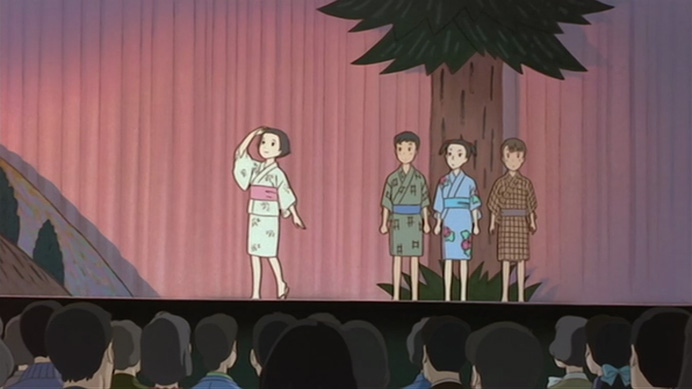 Isao Takahata is perhaps the least distinctive of the filmmakers on this list, at least at first glance. But what he lacks in superficial distinction he makes up for in sheer quality. He may be the single greatest anime director who’s ever lived, if only because he’s helmed three of anime’s greatest works: Grave of the Fireflies, Pom Poko, and Only Yesterday. Grave of the Fireflies is easily Studio Ghibli’s most straightforward (aside from Ocean Waves, but that doesn’t really count as Ghibli) and serious picture, and is widely considered among the very best the medium’s ever produced. It’s certainly one of the most depressing. Two kids’ parents die in the US firebombing of Tokyo and are left to fend for themselves in a country turned mean and apathetic by the war. It doesn’t end well for them, but that doesn’t mean there aren’t moments of magic and wonder along the way. Watch it. It’s widely available.

If Grave of the Fireflies is one of the most famous of all anime movies, then Isao Takahata’s other masterpiece is one of its least exposed: Only Yesterday. This movie, man. It’s a romantic bildungsroman led by the most complex and sympathetic female Studio Ghibli’s ever come up with, and that’s saying something. Prompted by nostalgia for a childhood visit to the countryside, an independent young Tokyo salarywoman spends a season working on a Safflower farm. As she gets to know her hosts, she’s attacked by bitter childhood memories that leave her empty and feeling out of place wherever she goes. It’s quiet and transparent and reflective in the ways all the best Japanese dramas are. For my money, I’d say it compares admirably to Yasujiro Ozu’s catalog. There’s a scene in which a family eats a pineapple and it will break your heart. Unfortunately, Only Yesterday isn’t available in the US (one of the few Ghibli movies Disney hasn’t localized for the US) but it can be imported or procured in uh, other ways. 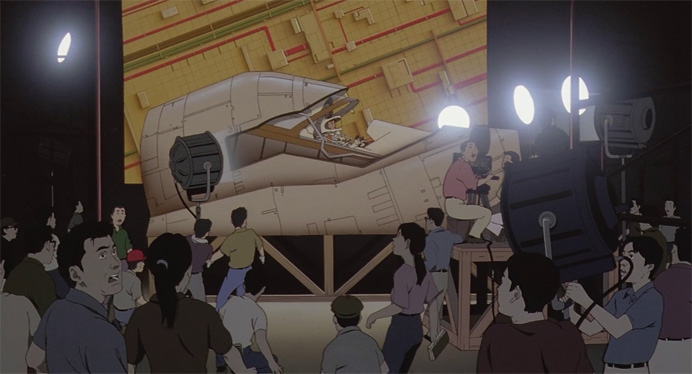 The recently deceased Sotashi Kon is one of anime’s all-time unique voices. From his first real effort, The Rose (one part of the classic short film trilogy Memories) through his final work, Paprika, his style is immediately recognizable. His character art has a weighty detail that instantly grounds them in believability—almost every one of his movies (and his show) features slightly overweight middle aged men with frumpy suits and tired faces; not a character type you often see fronting anime. His look has a realism and classiness that sets him above his peers.

His masterpieces are Millennium Actress and Paranoia Agent. The former is a whirlwind tour through the history of Japanese cinema and (very loosely) the life and career of one of its greatest treasures, Setsuko Hara. Like in all his stuff, here Kon tosses aside the line between reality and fancy, making what could have been a conventional love letter to a beloved actress a psychedelic, time-hopping splay of vignettes. It’s either magical realism or its all metaphorical, or both, or neither. In any event, Kon’s stamp is unmistakable and wonderful.

His only long form series, Paranoia Agent, takes away the nostalgia and cranks the surrealism up a few notches. If there was ever an anime that channels David Lynch’s ability to bend reality to his whim without losing his feet, it’s Paranoia Agent. It begins when a troubled toy designer gets attacked with a bent baseball bat by a grinning kid on golden rollerblades, and follows the detectives assigned to the case as the kid evolves into a supernatural urban legend who materializes to prey on people’s desperations. Or something. It’s really weird, and really great, and builds a symbolic mythology so subtle and mysterious that I can only compare it to Twin Peaks. Also check out Kon’s lesser known film Perfect Blue, which is his directorial debut. It’s cruder and more violent, but has a dark energy and maturity that sets it apart from most psychological thrillers—animated or otherwise. Tragically Millennium Actress, Paranoia Agent, and Perfect Blue are all out of print in the US.

Masaaki Yuasa is the only filmmaker here I would call batshit crazy. He is intensely prolific and his catalog is singularly bizarre. His only feature film as of yet is Mind Game, a dense kaleidoscopic explosion of images and emotions that is as measured as it is non sequitur. I’ve heard multiple comparisons to Brazil, but I don’t know why. Honestly I don’t remember what the movie is about. Something about the tragic irreversibility of decisions? Regret? Something, I think. Watch it if you want an unceasing mindfuck that inexplicably manages to pack an emotional punch.

The very same praise goes to Yuasa’s best long-form effort, The Tatami Galaxy. Like all of Yuasa’s work, a first glance might make you question whether it’s even an anime you’re looking at. His art is as schizophrenic as his everything else, and nothing he’s done really ‘looks’ like anime. This psychedelic, colorful show is centered on an extremely fast talking introspective college freshman who wants to make the most of his college career, and does so by uh, reliving his freshman year over and over or something, but he’s not going back in time or anything. Every episode starts with him getting involved in a different campus club, from the film club to tennis to foreign language, and some that are just cryptic and bizarre. Toward the end of the series (which is short, at 11 episodes), these isolated storylines begin to merge, and by the end it’s totally jumped off the rails into a Borges-ian meta-universal examination of identity (think Borges and I). This one hit particularly close to home, as I’m a listless undergrad myself. Check it out on Hulu.

4 thoughts on “Not All Anime Is For Shitty Kids”