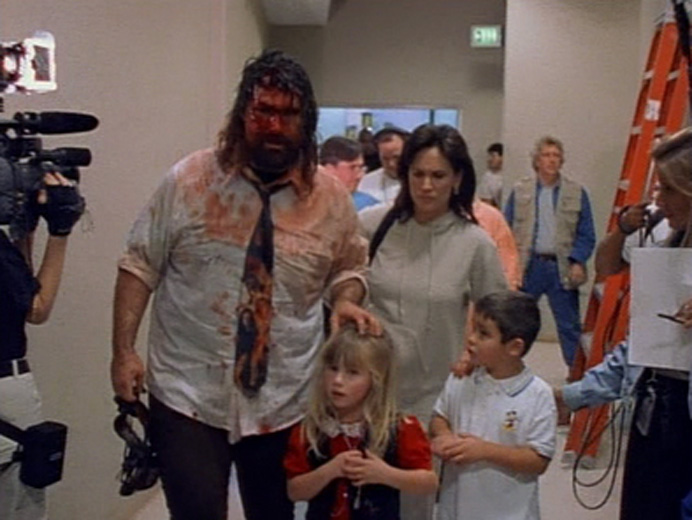 Beyond the Mat (1999), one of the greatest documentaries of all time.

Documentaries have always been fascinating to me.  They were born out of newsreels, short news segments that used to play before features in the theaters way back when.   From the newsreels came smaller, more intimate human interest stories (Kubrick even made a few in his early days).  An early example of this sort of thing, Nanook of the North, is often cited as one of the first documentaries—although, if you ask me, it’s nothing more than a piece of history. The production is stagey, and, as to be expected given the time period it came out, it’s dreadfully boring.

Around the 1960s, when cinema finally started to open up, a few people started to realize that vérité filmmaking could be used to create a documentary—the Maysles Brothers’ Salesman was an important landmark. It was distant yet intimate, objective yet close, and endlessly revealing.  Although dated now, their early filmography marks the first departure into interesting and effective documentary filmmaking.

We all know what followed—Michael Moore took over the form and put it on the mainstream map. What Michael Moore does is interesting—he starts off with a thesis, a topic he wants to express an opinion on, and then uses anecdotal narratives to express that opinion.  It works in spades—he’s broken all kinds of box office records for documentaries, and has been showered with Oscars and adoration.  Whether you like or agree with his work, you can’t deny his storytelling moxie.

Despite his huge success, there is still a separation in the minds of filmgoers between the ‘documentary’ and the ‘movie’. They aren’t included in the same thought, even though they can ultimately be just different styles of telling a story.  When people hear the word documentary, they still think National Geographic or The History Channel, or maybe the old trailblazer Ken Burns. But what they watch are movies like Jesus Camp or Anvil: The Story of Anvil—stories that are very similar in content and style to what they would call ‘regular movies’.  If major network sitcoms can be touted as having a ‘documentary feel’ then can’t we just break down the barriers already?

As you might imagine, my favorite docs are the ones that feel more like movies than most movies do. They have story beats, peaks and valleys, emotional ebbs and flows, and satisfying endings—but they’re human stories. ‘Real’ stories.

In many cases, the filmmaker starts out with an overall topic that they wanted to explore.  A good example being The King of Kong, which was originally about the larger world of classic arcade devotees, and organically morphed into a very human drama with a clear conflict, protagonist and antagonist. There was even a British TV series on BBC2 that takes this subculture exploration idea to heart. The aptly titled Weird Weekends with Louis Theroux is nothing more than a host (Louis), or presenter, who inserts himself into an American subculture.  He finds a few compelling characters and just kinda hangs out with them for a weekend—it’s staged and feels ‘produced’, but the moments are real and often hit very hard. However, the most epic and profound example of this sort of thing is the Paradise Lost Trilogy, which, in addition to being some of the most brilliant documentaries ever made, contain story arcs that put sagas such as Star Wars to shame. The trilogy is as much about the fall, rise, and redemption of antihero John Mark Byers as it is about a brutal slaying and its awful aftermath.

Sometimes, like in the case of American Movie, the beginning subject matter carries no larger scope. American Movie was never about independent filmmaking in America, or the American dream.  It is about those things, but only accidentally.  The story was always just about Mark Borchardt and his singular journey.  It’s quite gutsy to make a movie that way—a movie with no built-in audience.  Nobody knows who Mark Borchardt is, so if his journey isn’t interesting, or you can’t make it so, you’re left with a lot of wasted time, energy, and money.

Stacy Peralta’s Dogtown and Z-Boys is interesting, but it can’t hold a candle to the lesser-seen Stoked: The Rise and Fall of Gator, directed by Helen Stickler. With Stoked, you learn just as much about the history of skateboarding, but you also get a compelling narrative. The best you can say about Peralta’s movies is that they have a few interesting moments, and are stylistic—I’ll never forget the sequence in Riding Giants when the guys are talking about getting sucked underwater by the big waves, and I’ll never forget the choice to leave in Sean Penn clearing his throat in the Dogtown narration. But I don’t remember much else about it, because really, it’s just dressed up information.

I’d like to finish off by talking about Beyond the Mat, which, interestingly enough, blends every single style I just talked about. Beyond the Mat started out as an informational look at the world of pro wrestling, but then became a series of dramatic arcs, beautifully and artfully woven together.  This makes it the only narrative documentary ‘ensemble piece’ I can think of.

There are no weak threads.  The Mick Foley, Terry Funk, and Jake the Snake threads are all equally brilliant, and all completely fulfill their narrative purpose . I can only imagine the movie was crafted this way by its director, Barry W. Blaustein, because of his track record as a Hollywood screenwriter, having penned Coming to America and all of the Police Academy sequels. The man knows structure—this film is proof of that.

Beyond the Mat has literally everything—darkly emotional moments, darkly hilarious moments, and everything in between.  It’s one of those great movies where you don’t even have to care about the subject matter to love it.  It provides tons of history and rich information about the wrestling business, from the lowliest independent outfit to the weird world of the WWE (then WWF), and it paints a delightful mosaic of a quirky and uniquely American segment of our culture. It does all of this just by telling stories—human stories, real stories, the greatest strength of documentaries, and the greatest strength of cinema.