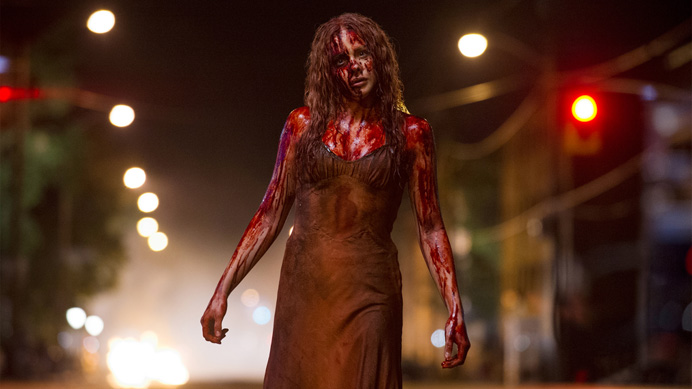 With the remake of Carrie out, it’s that time again for everyone to make their favorite complaint: “Oh god, another remake!  It’s like they’re raping my childhood!”

If you’re going to put forth that Hollywood is in need some new ideas, I’ll listen.  But it’s not as though this is a new thing.  Movies have always mostly been sequels, remakes, or adaptations.  Pick any random year since the dawn of cinema and I guarantee you’ll find as many as you do today.

Hollywood has always needed new ideas, because the majority of the best movies ever made are original ideas.  The reason for this is simple: an original idea is tailor-made for the cinema, whereas in adapting a book, TV show, comic, etc., you’re gonna lose something from the original. Occasionally, adaptations can improve upon the idea (Jurassic Park, Forrest Gump, and The Shining come to mind) but in general, “The book was better” or “They changed it from the comic!?!?” is a fair argument. (Incidentally, I think comic book movies should make a much stronger effort to deviate from ‘the comic’—the movie needs to work like a movie, not try to work like a comic.)

It’s also true that in literally every instance, the sequel, reboot, redux, remake, adaptation, etc., is an unabashed attempt to cash-in on the success of the original thing.  But who cares?  Movies are made in order to make money.  All art is only made to make money; there no such thing as anything else.

In the case of sequels, I think it’s always a noble idea.  Empire Strikes Back and Back to the Future Part II are proof positive that a sequel can work, and even be better than the original in some ways.  In both these instances, even though the original is wrapped up very nicely at the end, the sequel continues the story, adds depth, and creates new obstacles for the characters.

I was always bummed that they never made a sequel to The Breakfast Club.  The characters actually discuss the idea in the movie: ”What happens on Monday?”  The idea being that now that these characters are friends, what will happen on Monday morning when they interact with their peers in school?  I think that’s great fodder for a sequel.  It’s also a unique opportunity to do the same movie again, but in the inverse way—now instead of being contained with each other, alone, they are forced to deal with each other amidst a sea of other kids. That added pressure changes their behavior and the stakes.  It adds another dimension, as opposed to a movie like Home Alone 2 (not a terrible movie, but not great) where it’s just the same thing in a new location.

Of all the many types of cash-ins, remakes get the most grief, and I think it’s because the idea is literally used again—they don’t even try to continue the story.  But who cares?  If you love Friday the 13th, what difference does it make if they remake it?  They aren’t erasing the original from existence. (Which in a crazy way is a reference to both a line from Back to the Future and what George Lucas literally tried to do with the original Star Wars films!)

The whole “they’re ruining my childhood” thing is so nonsensical it makes my head spin.  I don’t even understand what those people are mad about.  Let’s say you grew up loving Carrie, and then a fourteen year old sees this new one and they love it, and then they see the original and hate it—what the fuck does that have to do with you?  Who cares?  It’s just such a worthless, empty gesture of a complaint.

If anything, the remake will spread cultural awareness of the original.  What’s funny is, that shouldn’t matter either.  I love The ‘Burbs.  If they remake it and twenty more people like the original as a byproduct, what the fuck does that have to do with me?

However, one thing that is usually a dumb idea is when directors want to revisit their popular works decades later by making another one, for instance, Indiana Jones and the Kingdom of the Crystal Skull.  But again, this doesn’t alter the original, so it really doesn’t matter.  Ironically though, it doesn’t even alter them when they literally alter them!  There may be a version of E.T. with walkie talkies in it, but the real one still exists, so as much as Spielberg wants to needlessly ruin his own genius, he can’t really.

Similarly, the whole “Director’s Cut” thing is pretty played out.  If a movie is ripped from a director and drastically altered, I get it, but many times it’s just an excuse to add more shit.  It just goes to show that many directors are so in love with their own work they don’t know how to cut out the fat.

Case in point: a few years ago Tom Hanks released a Special Edition DVD of his directorial debut That Thing You Do!, one of the best movies ever made.  On the disc was an extra version with like 30 minutes of added footage.  You could actually use the two to do an entire editing class on how to shape a rough cut into a movie.  The original version of That Thing You Do! is an expertly designed comedy with great command over its tone and dramatic beats.  The director’s cut is an unwieldy, overlong mess.  It’s overly expository and dull and gives wholly unnecessary character information that ruins jokes and leads the audience on tangential forays that are structurally confusing.  They even had more stuff with the fucking dentist that Charlize Theron runs away with. I get shooting that, but I’m glad they were smart enough to cut it out of the final cut.

With the announcement of Dumb and Dumber To, and the pictures they’ve released of Carey and Daniels in costume, my nostalgia heartstrings have been tugged, but more than that I’ve come to a realization that the original captured something in the culture.  1994 is one of the best years for movies and Dumb and Dumber is probably the best first film of all time.  The Farrelly Brothers seemed to come out of nowhere and made one of the most original and hilarious comedies that has ever existed.

Years later, somebody even made a prequel called Dumb and Dumberer and we all know how that went.  This new movie will probably be better than that, but it won’t be as good as the original.  It can’t be, because it’s being made so many years later.

This phenomena (the failure of things made years later) is commonly expressed by the Godfather movies, but I’d rather use Indiana Jones.  The three Indiana Jones movies are remarkable in that they get progressively better.  They were each made four years apart: 1981, 1985, 1989.  When distilled, each has an equal share of iconic moments, but as movies they tend to progress in character depth and action set pieces.  Think of the truck chase in Raiders vs. the tank fight in Last Crusade—the latter being just that much more fun and spectacular.

When Kingdom of the Crystal Skull came out, I remember a lot of friends saying, “It’s great, it’s Indiana Jones”.  But you don’t like Indiana Jones just because, you like it because it’s literally the best thing ever.  That sets the bar very high, and if you’re going to make a new one, you gotta be at the bar or above.  Any lower and it’s just wrong. it just doesn’t feel right.  Indiana Jones 4 doesn’t make me mad (I still have the originals, I’m not stupid) but it does suck.  And it’s why Dumb and Dumber To will suck too—when lightning strikes, you should just respect it and move on.

But I’m excited to see Dumb and Dumber To because I love everybody involved.  I’ll go into it with the unbiased feelings I expressed in my essay The 50/50 Rule, because maybe it’ll be good—you never know until you see it.

I’ll also see the Carrie remake, because I like the original and it might be fun and I can still watch the original whenever I want.  And I’m curious to see how they handle the opening scene, as compared to De Palma’s version.