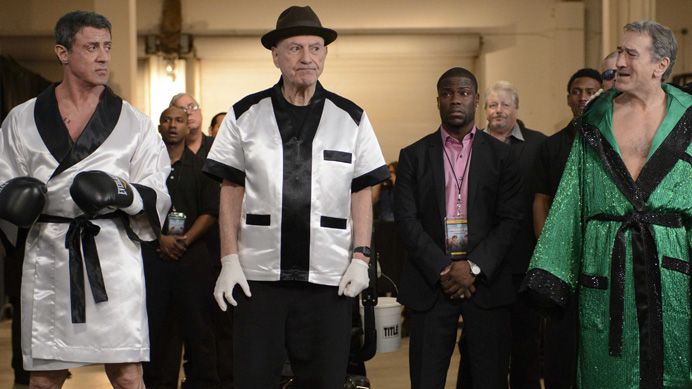 Since Hollywood decided to do Rocky vs. Raging Bull, I figured I’d do the same.

Stories are a template. For practical purposes, the story is the plot (it actually isn’t, but just bear with me). A story is only as good as the way it’s told. Rocky has a decent story, a story we’ve heard a million times, but it’s told with care and craftsmanship.  Rocky, the story, executed as the film Rocky, is transcendent—whereas Rocky, the story, executed as the film The Mighty Ducks, is okay I guess.  Raging Bull is not a story—it’s information about a guy, dressed up stylistically. That doesn’t make it bad, but, it makes the two difficult to compare.

If we look at Raging Bull as what it is—an experimental biopic—it’s pretty good. It’s just boring though, because the guy it’s about is boring.  Rocky, on the other hand, is about things larger than its characters.  It’s about obstacles and determination, love and friendship.  The ‘plot’ of Rocky is the structural nuts and bolts—the ‘story’ is those nuts and bolts, plus thematic strokes laid on top.  Raging Bull’s strokes are separate from its nuts and bolts.  And the nuts and bolts don’t follow a structure—they follow a chronology.  There is no ‘inciting incident’ in Raging Bull.  There is no ‘conflict’.  There are just fights.

The genius of Scorsese is that he uses the tools of cinema to evoke emotion. He knows how to make you feel something by moving the camera, how to put you in a room with his sound design. But, because he only does that, whenever he does it it’s noticeable. When other directors do it, it goes unnoticed, because they’re doing it to serve the story.  Scorsese isn’t interested in stories—he’s interested in cinematic emotions.  And that’s cool, because he’s very expressive at it.  And when his style is matched with a great script, like Goodfellas or After Hours, the results are transcendent.  But, often, as a result of him simply not being interested in telling stories, you end up with Raging Bull, a bunch of footage about a mean guy who says stuff sometimes.

John Alvidsen—a guy you’ve never heard of unless you’re a bonafide movie geek, even though he made fucking Rocky and The Karate Kid and Lean on Me—is a stylist, just like Scorsese.  But his style is designed to enhance and express the story.  Rocky is a common story, elevated by delightful minutia.  Ebert was in love with the tiny, cute detail of Rocky naming his pet turtles Cuff and Link.  That’s just one of a billion examples in the film.  Stallone’s script for Rocky is perhaps the most underrated of all time.  He wrote it living under more dire circumstances than the character.  He was living with Butkus, the dog in the movie, in a half square foot apartment in Philly.  He showed the script to Irwin Winkler at an audition, and they made the movie for five cents on the streets it takes place on.

The irony of it all is that Rocky is much grittier and more independent than Raging Bull, however, cultural perception would tell otherwise. While Rocky cemented itself as a touchstone, Raging Bull became an art house classic (because way less people cared about it, and it’s in black and white). But Rocky was made for far less money by a group of unknowns, whereas the star of Raging Bull had already won an Oscar.

Rocky has become thought of as mere Hollywood gloss, by virtue of being so popular.  Oscars, critical acclaim, box office success, sequels, and most notable, the fact that it has become fully ingrained into our lexicon and cultural ideals.  Franchising has tarnished the memory of the gritty realism and intimate, poetic detail of the original.  Nowadays, people think Raging Bull is the ‘gritty, realistic, boxing movie’—not Rocky.

Raging Bull is nothing more than an A&E biography, sans the interviews. If it was a straight documentary with talking head interviews and the fight scenes used as dramatizations, it might be one if the best documentaries ever made. But trying to be a story is just needless and confusing. The main character, Jake La Motta, has no direction, and therefore, no arc. He begins as a sleazy, mean-spirited, dumb guy, and ends that way, never learning a thing about himself or changing at all.  ‘Well that’s the point’, you might say.  But why?  The problem with that being the point is that it isn’t an idea.  It says nothing about the human experience.  Jake is not trying to do anything. he’s just a bad person who sometimes boxes.  He’s an abuser and a meathead.  When he’s upset about taking the dive, we don’t know why.

Protagonists do not have to change.  Marty Mcfly and Indiana Jones, two of the great film protagonists, don’t really change.  In fact, Indiana Jones has no real effect on the downfall of his antagonists at all. But in Raging Bull nothing even happens. Indiana Jones and Back to the Future are adventure stories lead by obstacles.  We understand exactly what Marty and Indy are trying to achieve and why.  We are on their side.  Raging Bull is beautiful to look at—even beautiful to listen to—but it’s a multi-million dollar sleeping pill.

It’s true that Jake’s only obstacle is himself.  That idea is supposedly expressed in the meticulous photography and editing of the fight scenes.  But how?  The fight scenes are technically well done, but to what end?  How does a dramatic slow motion shot, cut quickly with quick punching and elephant sound effects, express anything other than the brutality of the fight?  You can make up all the reasons you want for how, but at the end of the day, they are just that—made up.  I’ve heard Scorsese say a million times how Jake is fighting himself and how hard they worked on the fight scenes in order to show that.  But, how is he fighting himself?  And why?  He never wants to be a good person, changes his ways, or even really accomplish anything in boxing.  He basically just grimaces and grunts stupid things like “Let’s be friends” after his arbitrary outbursts.

In contrast, I don’t think I even need to explain the story elements in Rocky.  Even if you’ve never seen it ,you know what it’s about.  If you haven’t seen Raging Bull, you might assume it’s vaguely similar, but they couldn’t be farther apart.

The shots in Rocky actually express things, which is partly why it’s so beloved. Expressive shots give the audience something to grab onto and understand.  There’s a great moment in Rocky when Mickey, the great opportunist, sees his chance at the limelight and wants to manage Rocky.  Rocky sees through it and kicks him out.  But, as Mickey is leaving, Rocky keeps yelling, and while he does, he realizes that Mickey actually does have something to offer.  Mickey is out the hall and down the street by that point, and Rocky catches up to him and relents.  We’ve seen this moment a million times before, and will see it millions more.  So how do you depict something like this in an appropriate way and in the best way dramatically?  In Rocky, Alvidsen stays in the wide.  When Rocky comes outside and catches up with Mickey, we’re in the wide shot, and the elevated subway train passes by just as they shake hands.  A lesser filmmaker would’ve cut to the coverage, gone in for the close ups.  But in Rocky, we don’t even hear the dialogue. The visuals tell you the dialogue, so that we don’t even need to hear it.

There is more life and humanity, more filmic ingenuity and genius in that one small moment than in all of Raging Bull. So yeah, Rocky wins. Duh.

As a little side note:  Grudge Match isn’t the first time Stallone and De Niro have shared the screen.  They were both in James Mangold’s vastly underrated little gem from 1997 called Copland.  Both are acting against type, and they shine, especially in scenes together.