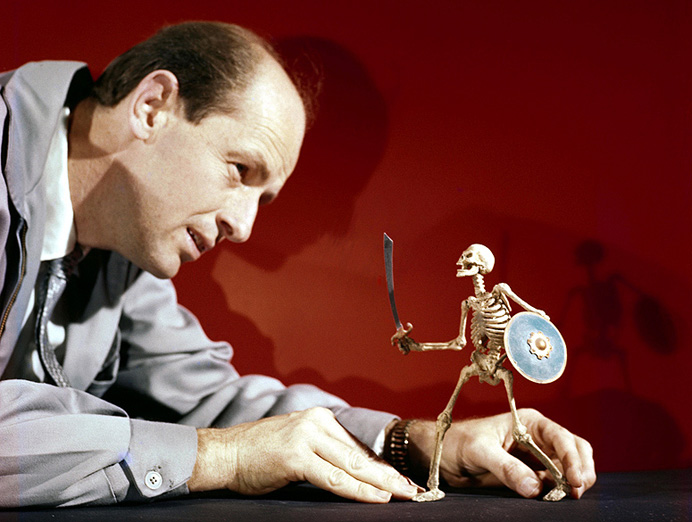 When I was a little kid my grandpa showed me King Kong, the 1933 one.  King Kong doesn’t look real, but it looks good, because it looks right.  Looking ‘right’ is the key.

Special effects are perhaps film’s biggest point of separation from the other arts.  In literature, if you want a monster in your story, you just describe it.  But a movie has to convince you what you’re looking at is real, even when you’re looking at the most not real things humans can dream up.  This takes a perfect synthesis of human imagination, technology, and innovation.

There’s this big controversy of Practical Effects vs CGI.  For those unfamiliar with the lingo, practical effects are filmed objects and/or actual effects created on set.  CGI stands for Computer Generated Images, and makes up much of what you see on screen these days.

On the Citizen Kane commentary, the late great Roger Ebert loved to point out that Kane boasts as many effects shots as Star Wars.  And he’s right, and this is neat.  Star Wars is synonymous with effects because George Lucas has literally built an empire that changed the way movies are made.  Ironically, he did so to better serve movies like Citizen Kane where effects need to be inconspicuous.

Here’s an example: Lucas used the Young Indiana Jones series as a proving ground for many of the effects concepts he trail-blazed, for instance, the modern crowd shot.  In the olden days, if you needed a large crowd you had to hire a thousand extras and put them in costumes and feed and direct them all day.  (In fact, there’s a famous story of Kubrick giving direction on a bullhorn to an extra in a crowd in Spartacus—the extra turned out to be a dummy which they rigged with wires to achieve the movement Kubrick wanted.)  To avoid all that wasted time and money, Lucas and his team (mostly his team) figured out that you could generate a crowd in the computer and multiply them in any way you like.  It’s a simple effect, and completely unnoticeable since those characters are out of focus in the deep background.  Little, imperceptible effects like this make up Citizen Kane, and are the nuts and bolts of everyday filmmaking, whereas the big flashy stuff is just for fun.

Nowadays, almost everything except the actors is fake.  In Titanic, the puffs of breath coming from the actors mouths in the cold were fake. (Orson Welles shot The Magnificent Ambersons on a cold soundstage to achieve the same effect.) In Forrest Gump, the gun flashes were fake. Hell, pretty much every gun flash in every movie is fake.  But they don’t look fake, they look real, and nowadays, any kid in their basement can make ones that look just as real on any over-the-counter editing program.  These types of simple effects look fine because they’re small things that occur naturally in real life.  We really do have guns and they really do make a flash when they shoot.  Not seeing it happen on screen would look fake.

But what about stuff that isn’t real, like an alien or a dinosaur?  In the olden days, they built these things, and to get them to move they used stop-motion animation, and it looked awesome.  Ray Harryhausen was a fucking genius.  The skeleton sword fight scene in Jason and the Argonauts really does look great.  It doesn’t look real, but that’s ok, because it’s not real anyway.  It only has to look right.

When they started making Jurassic Park, they were using stop motion, and it looked awesome.  They show test footage on the DVD, and it looks awesome.  But then they developed CGI that could be used to make a dinosaur. The movie is a combination of that, as well as animatronics, and in several scenes the integration is seamless and looks completely real.  The T-Rex eating the car scene looks insane.  There’s basically a dinosaur walking around for real, and you can tell which shots are robotic and which are CGI, but it doesn’t matter.  The angles, editing, and lighting just make it look real.

However, later in the movie when the Brontosaurus sneezes on Lex, they are again using a combo of robotics and CGI, but they both look fake.  When the dinosaur head is seen from over the shoulder coming into the frame and eating the leaves, it looks like a big fake head being pushed into the shot.  Then, on the reverse, in the close up, it looks like a big computer-generated dinosaur head.  However, you’re never ‘taken out of the scene’ as is the phrase when effects become distracting.  It’s because good dialogue lets you watch what’s happening and not be concerned with the realness of dino heads.

The idea here is that the argument of CGI vs. animatronics and practical effects is moot when you have a good story.  Star Wars is the perfect example.  People were mad to see a CGI Yoda in the new ones, but Lucas had a great point when he said (and I’m paraphrasing) ‘I don’t get the argument that puppets are better when they’re both fake?’.

There are puppets and model shots in the original Star Wars films that look awful, and there are ones that look 100% real.  In the 1997 special edition, there are shots that look 1000% better after being cleaned up, and there are shots that look way, way worse.  As I said before, the ultimate problem with any special effect that has to do with a spaceship or an alien or whatever is that these things are not real.  By inventing them, you are already at a disadvantage because you have to convince somebody that the fake thing they’re looking at is real.  In the olden days of 2001: A Space Odyssey and Star Wars, they filmed models.  Since the models themselves are real objects, they tend to look real.  But sometimes you’ll see model shots in crappier movies that look terribly fake. Basically, if you only remember the best examples, then practical effects look great.

A lot of times a computer-generated spaceship looks fake simply because there is no object there.  Without an actual object to photograph, you lose all semblance of reality, and the object just looks flat or like some kind of video game hologram thing.  Certainly between 1933 and 2007, there have been incredible advances in effects.  By sheer lines of resolution, 2007’s King Kong looks leagues better.  But, sometimes it doesn’t.  Sometimes it still looks comically bad, in the same way that it sometimes did back in 1933.

I’ve heard people say the effects in Terminator 2 look dated.  But who’s to say exactly what a person made of liquid metal would look like when they morphed into a human?  It looks pretty fucking good to me.  I think the coolest and most effective shot in the movie is when the Terminator cuts into his own arm and peels the skin off to reveal the robot arm.  As the shot begins, it’s a very simple makeup gag, but it’s effective because what’s happening is dramatically interesting.  And that’s really the most important thing.

Yoda was a compelling character in Empire because he carried a lot with him, and said cool things.  You didn’t notice that he was a goofy looking muppet thing because Frank Oz made him believable.  The reason people didn’t like Yoda in the new movies wasn’t because he was CGI, it was because he was less fun and the movie was less fun too.

Things can look right by virtue of a good story or good photographic techniques.  However, there is a margin of error.  Some great movies have some less-than-stellar effects, and some shitty movies have kick-ass effects shots.  But we’re all much more ready to forgive a good movie with bad effects than the other way around.  If Indiana Jones and the Kingdom of the Crystal Skull were good, nobody would care that the CGI monkeys looked stupid.  And since Raiders of the Lost Ark is awesome, we all love the crazy looking melting head at the end where they obviously just have a dummy with some shit pouring down its face.

Basically, the people clamoring for practical effects are nostalgia junkies who need everything to be the way it was when they were six because it was ‘all so much better’.  And the people blindly dashing toward a future where actors are replaced by hologram things that follow key-framed notations by Mac computers are also missing the point.  As with most things, salvation lies somewhere in the middle.

P.S. – The effects in Avatar were actually so great that people had to nitpick the story, which they would’ve praised in a less good looking movie.  And, the truth is, spectacle sells tickets.  Titanic wasn’t just beloved because it was a great love story, it was beloved because it looked fucking awesome.  Most of the highest grossing movies ever made are effects-heavy because with whimsy and adventure comes ghosts and goblins and aliens and explosions.  Jaws, Star Wars, ET, Jurassic Park, Titanic, Avatar—all movies that broke box office records.

P.P.S. – The alien in Signs doesn’t look great, and Shaymalan was never happy with it, but when I’m bawling my eyes out because I’m so engrossed in the best movie ever put on screen, I don’t care.  The scene is great, and that’s all that matters.

P.P.P.S – There’s a shot in The Gate that looks really fucking cool.  If you’ve seen it, you know the shot I’m talking about.