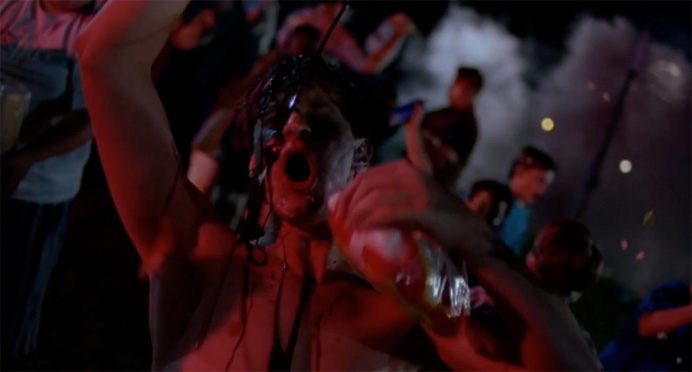 There are a lot of movie mashups out there on this here internet, many of them quite funny, but it’s pretty rare that you come across one that’s perfect. For a long time, Brokeback to the Future has been the undisputed king of this, but I believe that title has now been usurped by an up-and-comer by the name of Harmony Korine’s Heavyweights. It might not be as ‘funny’ (in the traditional sense of the word) but it makes up for that in pure transcendence.

Much like the music mashup gold standard, A Stroke of Genie-us by Freelance Hellraiser, what transpires is definitely funny, but you’re not exactly laughing. Instead, you’re smiling, and you’re feeling the laughs all throughout your body, warming you. It’s a rush of all-things-are-connected-in-this-world that takes hold of you and provides you a momentary trip. That is the power of the art of the mashup, when what is being mashed up comes together like peanut butter and jelly.

The creator of this video is Jon Solari, and this is his very first mashup. Dude hit it out of the park on his first at bat. Recently, I had the chance to talk with him about him and his creation:

I learned NLEs at the A/V club at my high school way back when, wasted a buncha money on a film studies degree, and have dabbled ever since, despite not working and not particularly wanting to work in ‘the industry’.

When and how did you come up with the idea for your mashup?

I picked up Heavyweights on blu-ray last year—which is kind of amazing, that it even has an HD release—and when it got to this scene, it just reminded me way too much of the ‘debauchery on the beach ‘opening of Spring Breakers for me to not eventually put the two together. The fact that it’s a Disney film and Spring Breakers had a cast of former Disney stars only made it that much more serendipitous.

How long did it take to edit?

Less than a half hour. I decided to use Windows Moviemaker as a kind of weird, masochistic challenge, so most of the real work was getting it to cooperate. I kept a lot of the original scene edits—the pace matches that of the song way too well as it is. The toughest thing was making the title card, really. I had to make a couple Frankenstein-letters from screen grabs of the SB credits.

This is your first video like this—do you have any other work elsewhere online we should check out?

I have some goofy photoshop nonsense on my site, JonSolari.com, but no other videos just yet. I made a few things in college, but they’re not worth calling attention to.

Any more mashups or videos in the pipeline?

Definitely more videos. Not sure about more mashups though, unless the universe presents me with another wonderful pairing like this one.

Well thanks for making it, man. Really great work!

Thanks for reaching out! It’s awesome to know someone actually liked my goofy mashup.