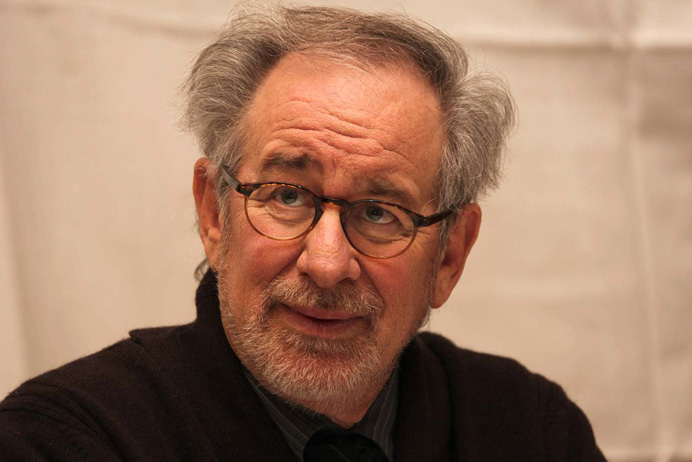 So anyway, yeah, I’m sitting here (not really) with the most iconic living legend filmmaker of all time, Steven Spielberg:

I love that you spell your name Steven and not Stephen!

I don’t care about The Sugarland Express (Steven makes a ‘who the fuck is this brat’ face) so I want to ask about Amblin’, to start.  Amblin’ is just two hippie people walking around, and they’re ‘ambling’ I guess?  And it’s all set to music.  It has your visual style, but it’s not really anything.

Yeah, in those days you didn’t really have to do anything.  If you shot something and it looked stylized and proficient, they just said “This kid can direct!” and then you were automatically friends with the studio heads and had like three-picture deals at the age of 22.

Wait but didn’t you lie about your age to be thought of as a whiz kid?

There’s a really funny part where the car runs into some shit and you hear a looped line of this old woman going “My snakes!”—I guess the car crashed into her snake farm?

Yeah, we had that in there.  Do you have questions, or—

Duel seems like a Second Unit’s wet dream—there’s so many great shots of mirrors and car mounts and what not.  You obviously storyboarded all of it, but did you shoot all of that yourself or did you have a Second Unit?  Hold on—(looks up on IMDb)—it looks like there was a dude on Second Unit named James Fargo.  But my point here is, you get a lot out of insert shots.  Rather than just using them as B-Roll, you use them for dramatic effect.  The best example of this in cinema history came later in your career with the shot of the water cup in Jurassic Park (which, ironically, was as hard to make work as the fuckin’ dinosaurs).

Yeah I mean, a shot is a shot, you can’t just waste time showing the audience things.  If a guy’s driving a car we’ll know that by seeing him driving—we don’t need to see the road and the hood and the tires.  If we do see those things, there should be a reason why.  As I’m sure you know, I keep up with a lot of the modern indies, and I like a lot of them more than you do, but, I’m old, so I have that built in thing where I have to be positive about what the next generation is doing in art.  But, I do agree with you that a lot of the modern indies are just footage of people doing mundane tasks set to spacey guitar notes.  In my day, the score helped you feel things as much as the shots, and they worked together, and the shots meant something.  Like you mentioned, in Duel, you see that speedometer needle rising and it means something, it puts you in the drama.  Closeups have that power—they aren’t really meant for peoples faces.  A face is a face.  Isolating something that our vision wouldn’t normally isolate is the real power of the close up.

That’s why you’re the best of all time, my man!

(Spielberg sips his coke, and nods, knowing, but comical, not like, pompous)

So now that we understand one of the tiny but profoundly important things that makes you the best director of all time, let’s talk about some of your missteps.

Of your movies that nobody cares about, which one is your favorite?  Always, 1941, or Amistad?

Always, because of John Goodman and Holly Hunter.

Yeah, I’ve never even seen 1941 or Amistad.  1941 I’ll probably try to look at someday, since I love the cast.  What happened with those though?

No shit.  Anyway, Jurassic Park is awesome, but I always thought the end was kind of abrupt though—they just fly away, the dude sees some birds, and that’s it.

What else would you like to happen?  We probably shot some stuff or there was something more in the script, but what else is there to say?

I mean, I hear you, but still.

What about the second one, did you make it give me a headache on purpose?

No dude, honestly, I don’t know what happened with that one.  I obviously don’t do many sequels.  I mean with Indiana Jones, I proved I can make three movies in a series, one better than the next, but those are separate adventures.  In The Lost World, we tried to continue the story.  And everything that happens makes sense, but I don’t know, it just didn’t work.  That was Vince Vaughn’s big break though.

Funny you mention Indiana Jones, and I agree, they get progressively better, and with Jurassic Park, you made the sequel right away, four years out, just like Indiana Jones.  So yeah, I don’t know.  I’ll spare you the conversation about Indiana Jones 4.  South Park covered that for me.

Yeah, Trey and Matt burned me again—I love those guys and they’re true fans of mine and I appreciate it.  I met them briefly when they made that thing for Universal Studios back in the early 90s.  That thing was brilliant, but I didn’t expect them to go on to be so transcendent.  Good on them, but those fucks stopped me from updating the original Indiana Joneses—

Thank god for that.  Hey, that scene in Jurassic Park 2 where the glass is breaking on the camper thing and they might fall through is one of the great edge-of-your-seat scenes in movie history.  Too bad it’s buried in such an abysmal movie.  But, dare I say, you did that scene better than your good friend De Palma!

Ha!  He taught me everything I know!  Tell him I said that!

I will!  Hey, Schindler’s List is a thing you made.  It’s not really something you can watch a lot. I saw it when it came out, but I was only 7.  It’s like an ‘important’ movie—when you made it you were by far the most popular director in history so that was kind of like a gimme, just in the sense that it’s like ‘oh yeah, of course this is good’.  It’s funny too because it came out so close to Jurassic Park and was so different.

One thing nobody ever talks about is the impact Saving Private Ryan had on the culture and climate of filmmaking for the next ten years.  In 1964 when Kubrick did Dr. Strangelove, he used a handheld camera to mimic the newsreel footage of the time.  Following that cue, you used a handheld camera in the opening Normandy scene in Ryan.  You also utilized a high shutter speed to not only mimic the newsreels but also so you could see every little detail of dirt and dust and blood.  It wasn’t a new effect—you see it littered throughout movies since the very beginning, and it is, at its essence, just a simple in-camera effect that’s built into the mechanics of the camera, but you were the first to use it so stylistically.  As a fallout, the effect caught on and was copied ad nauseum.  But nobody that copied it used it interestingly.  Same thing with The Matrix when they did the 360 shot.  What’s funny is a small indie movie called Buffalo ’66 did the same effect a year before, so the actual effect wasn’t new.  But in The Matrix, the shot has meaning—it shows how time slows down and physics can be manipulated in a computer-generated world.  The people who copied it just used it for flash because it looks cool.  But anyway, what I find funny and awesome is that so deep into your career you were still informing the visual styles of the time, still ahead of the game, still being inventive.  So good on you.

Thanks, yeah, I mean, as directors, we all do things just because they look cool.  But along with that is ‘why does it look cool?’  For me, and a few like-minded people, what looks cool to us is directly tied to how it expresses the story.  Bob Zemeckis comes to mind—he operates the same way.  A lot of our shots are just off-the-cuff, I just get the impulse to put the camera somewhere, but later when you analyze it you realize why and it’s like, ‘oh yeah, of course, the camera goes there and moves this way because this is what’s happening in the story’.

Catch Me If You Can is a great movie.

Did you recommend DiCaprio to Scorsese?

Hey, why did you have that Catherine Zeta Jones stuff in The Terminal?  If that movie was 80 minutes and didn’t have that stuff, it would be one of your best, but not only did you bloat it, you made it silly. That hot chick is not going to fall for a weird dirty guy that lives in an airport.

I don’t know, I like that stuff, it’s whimsical.

Yeah I know, like with the Wes Anderson indian guy doing the plate spinning and everything, but whatever. At least don’t cast Catherine Zeta Jones, she’s too hot for it.

Says you.  Well listen man, this has been a dream come true.  You are a genius and your images and sounds made me want to do what you do.  I’ll never do it as well, but I’ll spend my life trying.

Thanks, I had fun.  I’m a huge fan of your stuff on Smug Film, and your videos.  I love that one shitty music video you made for somebody I’ve never heard of!  No but seriously, I love Fake Henrik Zetterberg.  You and Jakob are very talented.  Here’s a few million dollars.  (Hands a check)

Thanks, man.  And to end, I gotta ask—in the 80s and 90s you threw your name on everything: The Goonies, *Batteries Not Included, Animaniacs, Back to the Future—and it was genius because it kept your name salient and helped bolster those titles.  But dude, why why why why why did you take your name off of Three O’Clock High? That movie is so good.

2 thoughts on “An (Imaginary) Interview with Steven Spielberg”