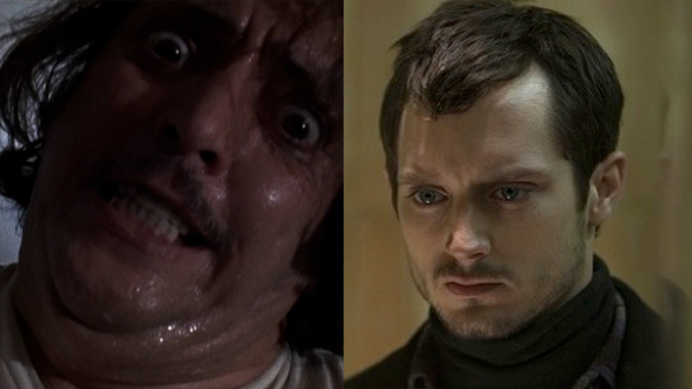 Whether or not we can learn a thing or two about the current state of cinema by examining the 1980 film Maniac by William Lustig and its 2012 remake by Franck Khalfoun is difficult to say—both films were not made for mainstream audiences. And both have leading men that wouldn’t ordinarily be considered leading men: starring in the 1980 film is Joe Spinell (the extremely prolific character actor who had bit roles in such films as The Godfather 1 & 2, Taxi Driver, Rocky 1 & 2, and Cruising) and in the remake, Elijah Wood, star of the immensely successful Lord of the Rings saga (as well as many other films that aren’t necessarily known as Elijah Wood vehicles). The original Maniac was shot in the very seedy New York City, with Spinell stalking about the grimy 42nd St theaters that would soon be playing the very film he’s acting in. When it was released, it caught some of the backlash that all “slasher” films were experiencing at the time—namely, accusations of being merely an exercise in violence for its own sake. (Gene Siskel took pride in claiming he walked out of Maniac after 30 minutes.) The remake was shot in sunny Los Angeles, mostly in the downtown area. It has yet to have a wide release here in the US.
END_OF_DOCUMENT_TOKEN_TO_BE_REPLACED