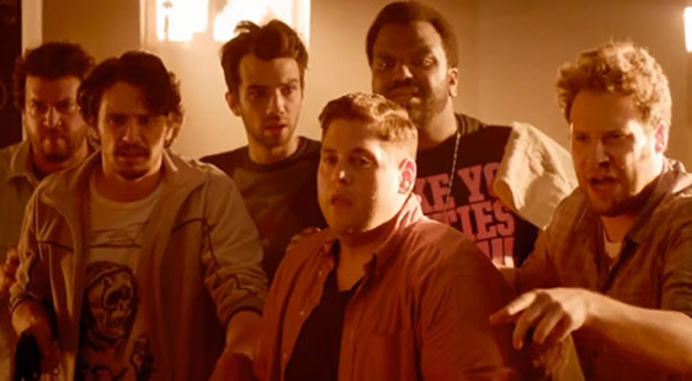 The entire movie looks this goddamn ugly, albeit higher resolution. (Sorry, this was the best image I could find online that represented the actual look of it and wasn’t just production stills or whatever.)

This film doesn’t need to exist.

I don’t mean that in a hyperbolic, insulting way. It’s completely true. This is an entirely superfluous film. And I’m sure those involved would agree, and giggle at the thought (especially the giggle-prone Rogen) and take pride in the fact that they made such a useless movie. But I’m not smiling, or laughing, or giggling.

Alright fine, a couple times I did smile, and laugh, and giggle. These guys are funny, and as such, are bound to do a few funny things over the course of three acts. But overall, this film is just uncomfortable to watch. It’s a skit premise stretched about 90 minutes too long. Had this been one short in a series of shorts (a la The Ten) it would’ve been alright. But the way it is right now, it’s an endurance test.

Movies by and/or starring these guys always tend to have tons of deleted and extended scenes. This Is The End is like if you took all those unfunny scraps that were scraps for a reason and cobbled them into the initial short that this film should’ve been, in order to make it movie-length. As one might imagine, the result is something with no real story, or pace, or conflict, or suspense beyond wondering when the next legitimately funny thing will finally occur.

It’s no surprise that this is Evan Goldberg and Seth Rogen’s first foray into directing. They clearly have no idea what they’re doing. They drop the ball in every area a director should be in control of, from visual aspects such as making sure the movie is nice on the eyes (this is one of the worst-looking movies I’ve ever seen in theaters) to story aspects such as making sure the characters, and their motivations, make a lick of sense. (Aren’t actors supposed to care a whole lot about ‘motivation’? Don’t they obsess over that like crazy in acting classes and shit? Here, that’s all tossed out the window.) The lack of care towards all these aspects wouldn’t have mattered much in a silly short. You’d let shit slide because the laughs would be non-stop. But a movie? A full-length movie? Inexcusable.

I can’t stress enough that I really do like these guys. They’re all very funny actors. I like Superbad and Pineapple Express and whatnot just as much as the next guy. So don’t read this review thinking I just don’t ‘get’ their humor, or that I have something against them. I really don’t. I’m in their corner. I want them to succeed. Which is what makes this so painful—I see more in them than they can bring out of themselves when left to their own devices.

Not only do they lack an understanding of their own strengths, they don’t seem to understand the worth of their cameo-relegated buddies either. Michael Cera aside, not one cameo in this film is funny. It’s as though they had ideas such as “Hey what if [insert guy they’ve worked with before] is in the party scene?” and were all “Yeah! That’s great! Let’s have him be at the party!” and then forgot to actually come up with anything for them to do, as though their mere presence were somehow supposed to be entertaining enough. The movie Dinner For Schmucks used to be my favorite example of a wasted talent movie (Larry Wilmore, Kristen Schaal, Nick Kroll, Andrea Savage, Ron Livingston, all very funny people, all playing side characters, and given literally nothing funny to do whatsoever) but This Is The End takes the cake.

It also takes the cake for ‘most time killing between the first and third acts’. Not much happens in the grueling, one-note second act beyond them bickering scene after scene. The room of the house may change, but the tone is always the same. It’s alarmingly monotonous. And there’s this awful motif of a video diary, where that they take turns going off into a room to talk to a camcorder and voice their gripes. It’s a total ‘let’s bump the runtime somehow’ move that never furthers the plot at all.

Apparently the idea for this movie had been bouncing around their heads since 2007. Hopefully, now that it’s out of their system, this is the first and last frivolous movie they will ever feel the need to make, and they will get back to doing what they do best—serious work. And I don’t mean ‘serious roles’, I mean actually working. This is a ‘dicking around’ movie. I’m sure it was fun on set, but it sure ain’t fun in the audience.

And that lack of fun really, above all else, comes down to lack of story. Story is everything. Not every movie that has a well-constructed story is fun per se, but every movie that is fun has a well-constructed story. This is because the story itself is the roller coaster track. The hills and valleys and turns and twists and loops all need to be in the right place for the ride to be memorable. And to construct something like that takes planning and discipline—not ad-libbing and ‘winging it’.

There’s a brief moment in the film where Seth Rogen describes a basic story idea he has for Pineapple Express 2. It’s actually pretty clever, and probably would make for a decent movie. They should work on that. (Work being the keyword here.)

3 thoughts on “This Is The End: Hopefully, Yes”