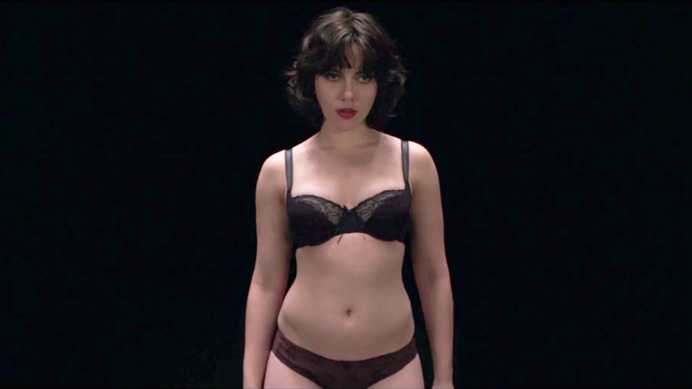 While waiting in line for the bathroom, I couldn’t help but overhear two women talking about the movie we had all just come from.

“Totally pointless. What was that even about?”

I guess on the surface I can see how this film could seem pointless. I mean, I get it—long silences, abstract cinematography, and alien invaders just don’t really do it for some people. However, I couldn’t help but think that maybe the reason they didn’t understand the movie was because they weren’t looking in the right place; this isn’t actually a movie about an “alien seductress [that] preys upon the population of Scotland” as its IMDB tagline says, it’s a movie about women and their place in modern society.

Under The Skin follows Scarlett Johansson’s character as she drives the streets of Scotland looking to pick up men for sex. With her eager demeanor and saucy looks, she lures her unsuspecting victims into a sort of trans-dimensional feeding chamber and then immediately sets out to find more. However, after picking up a strikingly disfigured young man, along with a chance encounter with a mirror, something clicks inside of her head and she suddenly develops empathy. We then follow her as she then wanders the countryside in an attempt to discover herself.

I went into Under The Skin expecting something mindless or violent, and instead left feeling fairly bummed out. The movie is certainly vicious, but the overall tone is one of despair. I couldn’t help but see the plight of her character as a metaphor for the condition of being female–she’s cast by those around her as either predator or prey. When Johansson’s character is the predator, she’s a cold, heartless sex machine with no morals and an animalistic need to consume. Yet upon her discovery of her own more human emotions she’s quickly devoured by the world around her.

I find it fairly easy to apply these bleak lessons to the plight of women in general. Kindness, empathy, and free-flowing emotion are all traits we ascribe to women– traits we ultimately look down upon as weaknesses when it comes to survival. Under The Skin shows exactly how the protagonist’s gaining of humanity directly becomes her downfall. The disturbing beach scene demonstrates this theme most succinctly, as we are shown how compassion opens up to vulnerability, a trait that ultimately leads to death.

Furthermore, with or without humanity, our protagonist is still victim to subjugation by the men around her. When she’s the predator, it is because she has been brought into this role by her male overseers; when she’s the prey, men at every corner mercilessly hunt her. This connection between Johansson’s character and women in general was only further hammered home for me during the last scene. The disgust that her attacker feels when he realizes she is beyond the simple sex object he expected, and the violence with which he reacts towards her, is sadly a recognizably common experience for women across the globe.

It’s not all completely death and despair in Under The Skin though. The camerawork here is exceptional—the mood set by director Jonathan Glazer and cinematographer Daniel Landin is worth the ticket price alone. If you don’t leave the theater in a dreamlike daze, maybe you are the real alien. I loved the usage of monochrome colors and large shapes in place of a more traditional, cliché Sci-Fi design—going abstract with it made it creepy and plausibly otherworldly. I was also pleased with the equal opportunity male nudity; it’s pretty rare to find a movie where the camera objectifies the men, and keeps the female form in the shadows.

Last but not least, Scarlett Johansson gives a fantastic performance that, call me cynical, I wasn’t expecting. I wasn’t a fan before, but she not only pulled off the role, she hugely upped my respect for her as an actress. She doesn’t have more than a handful of lines of written dialogue in the entire film (and apparently her drive-by pickup attempts were largely improvised) but her facial expressions—all at once, alien and empathetic—tells the story well.

I was very impressed with the depth of this film, and this year is really shaping up to be the year of the surreal. Under The Skin certainly deserves a place on that list of mine.

One thought on “Under The Skin: The Year Of The Surreal Continues”