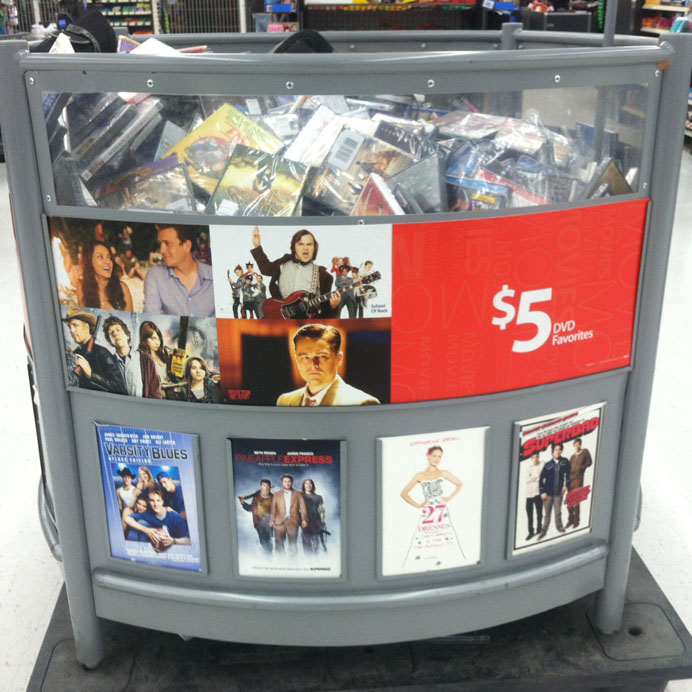 I never go to Walmart.  Not out of some liberal hatred for it or anything, though. I don’t go because here in Michigan, we have a superstore called Meijer which makes it unnecessary to shop anywhere else.  (The people here call it ‘Meijers’ by the way—it’s a stupid, Michigander thing.)  Anyway, last night I went to Walmart with some friends, because they wanted to go to Walmart, and I was at their mercy, so I went.

Walmart has a bargain bin.  A real one.  Meijer phased out their bargain bins a while back, which sucks, and is really the only thing that sucks about Meijer.

The only thing that bugs me about Walmart’s bin is that the sides are adorned with advertisements for movies you’ll find inside.  The whole fun of a bargain bin is not knowing what’s inside, and digging through like a maniac and finding a surprise copy of the Tremors 4-Film Attack Pack on the bottom. Luckily for me, the movies advertised on the side had all long since been picked out—none of them were in the one I was digging through (which was double great, since those movies suck, and they would’ve taken up valuable bin space.)

Holding seven movies in your hand and simply multiplying that number by five to see how much of a dent the bin is making in your wallet is so much fun.  You find a few more, and put back the ones you don’t care as much about.  I had to throw away a bunch of titles because they weren’t anamorphic, which actually really bummed me out because I really wanted to buy Batman Forever (because I love it) and Batman and Robin (because it sucks so bad).  I probably should’ve thrown School Ties back—it really teetered on the “do I really care about this enough to own this” precipice, but, I’d just scored another music video gig, so in the words of John Hammond, “I spared no expense!”

Here’s what I got:

Wanderlust (The David Wain instant classic from last year.)
Hugo (Which I haven’t seen yet, and I’m sure the DVD is the absolute wrong way to watch it, but whatever.)
Limitless (I bought this because it sucks so bad in a really fun way.)
Moneyball (One of the few great movies of the last few years.)
School Ties (Eh, why not, it was five bucks!)
Uncle Buck/The Great Outdoors Double Feature
Pretty In Pink/Some Kind of Wonderful Double Feature
Serenity (Never seen it before—isn’t it connected to some TV show? I probably won’t ever watch this.)
Falling Down (I mean, you can’t not buy this. Everyone should own this movie.)
Tremors 4-Film Attack Pack (That’s all four movies for five bucks. That’s insane, especially since the first one is literally one of the best movies ever made.)
Outbreak/Contagion Double Feature (I like Outbreak enough, and I hear Contagion is joke bad.)
Wall Street: The Insider Trading Edition
and lastly…
This Means War (The Reese Witherspoon vehicle featuring the guy who plays Captain Kirk in the new Star Trek movies.  This movie could’ve easily made it on my 10 Movies Nobody Has Seen list.)

I bought that last one because I’m especially curious about those sorts of movies.  When I watch them, I feel like I’m the only person on earth that ever has.  Like Al Capone’s vault, they’re empty, but still intriguing.

I watched it as soon as I got home, and to be honest, I was pleasantly surprised.  It’s not a good movie, but, it’s not terrible.  It’s about two FBI agents who end up meeting the same girl, unbeknownst to each other.  Once they find out, they duel for her hand by using all kinds of covert FBI surveillance toys.  It’s a very cute premise, and the movie actually does a good job of having fun with it.

I like movies with very clear, built-in conflicts.  Not only are these two guys against each other, but we know that right around the climax Reese is going to find out about their little bet and hate them both.

I like the cute title, and I was even surprised that it restrained itself from wall -to-wall ‘quirky dialogue’ and bizarre, tangential set pieces (like in Failure to Launch). All in all, it was a cute little madcap comedy romp.  It felt like a movie—which is more than I can say for 99.9% of everything else out there.  There were times while watching it where I even slightly cared which guy won the competition.

When the credits rolled, I saw that McG had directed it.  That makes sense, because of the color palette—sometimes scenes were literally completely blue, with harsh orange highlights on the actors’ faces for no reason. And, there were action scenes, so the hiring of him isn’t that arbitrary, I guess. Looking at his filmography, this is far and away his best movie, so there’s that.  That’s really the best thing I can say about him. The worst thing I can say about him is that I hate his name so much that it makes me want to strangle him.

I tried to look at Hugo today before writing this, but I couldn’t get through it.  I will never watch Hugo.  I can’t.  I don’t care how Scorsese handles the 3D—I can’t watch him direct little kids, and I can’t listen to the faux whimsical score.  It just goes too far against the grain for him.  I’m looking forward to his new one though, The Wolf of Wall Street (not to be confused with Wolves of Wall Street).

Speaking of Wall Street, I’m excited to own a special edition of Wall Street to go next to my regular edition.  Wall Street is dear to me because it’s the only movie I love that doesn’t make me laugh.  There isn’t even a single joke in the movie—it’s a straight drama, and it works.  It’s by far Oliver Stone’s best movie, made well before his descent into complete insanity sometime around Natural Born Killers.

Wall Street is a beautiful movie.  It boasts very specific, Scorsese-esque shot compositions, designed expertly to cut well—which makes sense, because Stone was a student and protégé of Marty’s.  And similar to all Scorsese movies, Wall Street is an example of how a movie about people talking is perfect fodder for bombastic camera movements.  The camera expresses the emotion in the drama, and that’s just how it should be.  Stone even one-ups almost all of Scorsese’s catalogue because the story—which Stone wrote—is tight and clear.  It’s a pretty perfect movie overall.  The split-screen sequence is particularly amazing, and inspired a similar scene in Boogie Nights.  And the score by David Byrne and Brian Eno is fucking fantastic.

I’m very excited that I now own Limitless—it’ll fit nicely between The Room and S1m0ne on my shelf of joke movies.  “Wouldn’t it be cool if like, when he thinks, we see all the trickling information running up the walls?! It’ll really put you in his head!”  Yeah, great idea Mr. Eight Grader.  Good job getting millions of dollars to put that idea on screen.

Lastly, I have to say something Joel Schumacher’s classic Falling Down. I’m well aware of the fan edits, but I have to say it.  You can’t not say it if you’re talking about Falling Down.  The movie shouldn’t have had the Robert Duvall parts.  There, I said it.  I think they added those parts to covertly test the fortitude of fast-forward buttons or something.

In conclusion—go to Walmart.  Don’t worry about the corporate greed or whatever.  You can furnish your DVD collection for pennies (dollars) and have fun doing it!

One thought on “A Dig Through Walmart’s Bargain Bin”