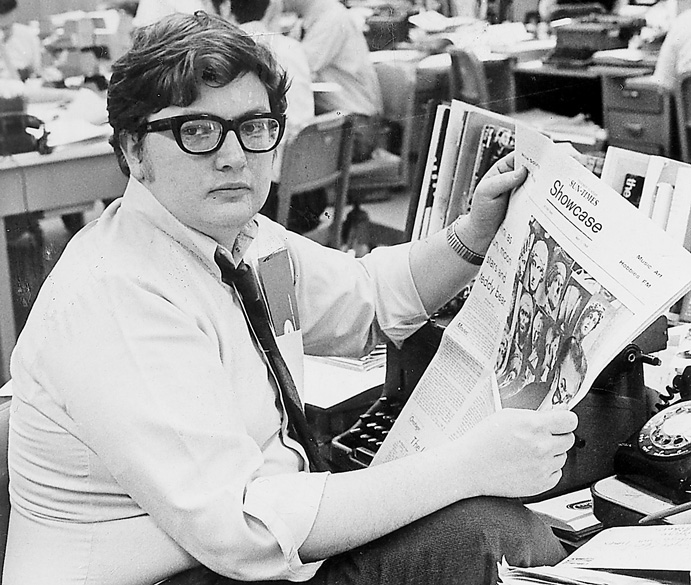 Today, John D’Amico was supposed to wax poetic about obscure zombie movies. That piece has been moved to next week. I don’t think anyone wants to read about zombie movies right now, or read about anything to do with movies, for that matter, unless it has to do with Roger Ebert. At least, I certainly don’t.

I expect that over the next few days, weeks, months, I will binge on everything Ebert. Episodes, books, interviews, etcetera. That’s the kind of death this is. A death where you are left speechless and searching, grasping for the artist’s soulful air as though it will wisp away into the ether if you don’t. But of course, it won’t. It will live on forever, and there is all the time in the world to experience and re-experience it. But the impulse is unavoidable.

I went through this when Michael Jackson died. I couldn’t stop listening to his songs and watching his videos. And even when I wasn’t, they were still in my head, providing the backbeat to my every thought. Your whole world takes on a different flavor from the oversaturation. It’s as though you’re carrying two souls within you. Every creative act you make is weighed against what that sister soul, that icon, might do. It humbles you. It reforms and expands your values. And I look forward to that happening to me with Roger Ebert.

This is not to say that the spirit of Ebert has not been within me, and the rest of the critics on here, from the moment we began Smug Film. It’s impossible for it not to have been. He’s our goddamn spirit animal. Sure, as we got older, we gravitated towards other critics (for me, Pauline Kael and Armond White) but Ebert raised us. He was the first person besides my parents to get me to think about movies critically, and damn near everyone around my age can say the same. Like Mister Rogers, he was a godfather—someone not blood-related that you can go to for honesty and wisdom, and will be there for you until the day you die. Even when you grow up and don’t think about them as much.

Watching old episodes of At the Movies, I feel that same sort of nostalgia as when I watch children’s programming from my childhood. Something about the colors and the sounds produce a sort of synesthesia where I can smell and taste what’s going on. Even just the name Roger Ebert produces that effect. I hear it and I can smell the slightly sweet musk of 90’s movie theaters—stale popcorn and sticky floors—but also, his blazer. I swear to god I can smell his damn blazer. And I almost want to find some goodwill store nearby and sniff blazers until I find one that smells just like Roger Ebert smells like in my mind. Not even because the smell in my head is particularly pleasant. Just because I want to hug something that is him.

Siskel, I definitely feel love and nostalgia for too, but it was difficult to have that same connection with him. He was the Meg White to Roger Ebert’s Jack White. A vital part of the magic, absolutely, but when he spoke, you didn’t feel like he was talking to you. It always felt like he was merely talking to Ebert. With Ebert, you always felt like he knew you were there, sitting cross-legged on the living room floor, mouth slack, eyes glued to his every opinion, whether it be about a kids movie or a movie you won’t be allowed to see for another 10 years, worshipping him.

There is a desire within damn near every filmmaker alive to have a movie reviewed by Roger Ebert. For me, that’s always been how I’d know I’d finally ‘made it’. And as silly as it may sound, it almost feels like a movie can’t even be considered a movie unless Ebert has reviewed it. That’s how important the man was to film criticism. And there is no film critic out there now that carries that same weight. Sure, I’d love to hear what Elvis Mitchell or Manohla Dargis think about my shit, but I wouldn’t feel an iota of the same elation or validation.

Although we’re sad right now, I think that perhaps the now impossibility of the dream of Ebert one day reviewing your work might actually be a positive thing for us budding filmmakers. Cinema is changing. And Roger Ebert’s death may be the deciding line of the end of an era. Never has it been so blatantly clear that popular things are often the worst things. And I don’t just mean Superhero blockbusters—I mean almost every movie up for an Oscar, or a ‘Spirit Award’, or whatever. Hollywood is shit. Indiewood is shit, too. And a change is a coming.

A golden age of low-budget, truly independent cinema is just on the horizon. We are already seeing the first sprouts of it. We can smell it, like spring, in the air. And by we I mean us filmmakers. Big festivals and established critics don’t seem to see us as anything worth noticing. And we shouldn’t care. That’s the old guard. We need to be the new guard. We need to be the filmmakers, the critics, the producers, the festivals, the theaters, the everything. And that’s part of why I started Smug Film. One cannot be just a filmmaker anymore. Too much needs to be changed in the world of cinema. So let’s all work together, and wear many hats, like that Caps for Sale dude.

Let’s stop looking for acceptance, and start becoming the acceptance we seek. Because the only acceptance that ever truly mattered to us is no longer possible. The king is dead. But his soul will live on through us. We will study his insight (yes, The Brown Bunny deserves three stars) as well as his battiness (one star for Wet Hot American Summer? Really?) and we will rise, like zombies (phat callback to the first paragraph, sup John D’Amico) and feast upon the non-existent brains and stone hearts of the movie elite.

Roger Ebert, I love you. We all love you. And we will make your proud.

XOXO,
Cody Clarke
A Dude You Woulda Had Fun Kickin It And Watchin Russ Meyer Movies With, Also You Mighta Enjoyed Shredder And Rehearsals But Even If You Didn’t That Woulda Been Totally Fine

P.S. The new guard knows that back in 2009 ya boy Tom Ford shoulda won Best Director and Best Picture and Best Adapted Screenplay. Tom Ford, get back to filmmaking. Don’t be mad that people didn’t give you as much props as you deserved. Stop dressing Justin Timberlake and cutting his hair and crank out another masterpiece in spite of Hollywood being dumb. We support you forever. You’re the real deal. And you are us. Kindred spirits. We need you fucking shit up on the inside, while we throw rotten fruit at the gates, ya feel me?

P.P.P.S. The new guard loves and respects Vincent Gallo until the day we die, but knows that motherfucker needs to stop sitting on Promises Written in Water and release the shit already. Yes, it’s a beautiful thing that you’re refusing to show a work of art because fuck everyone and especially fuck critics and festivals. But enough time has passed that nobody cares about that movie or even remembers it exists except us new guardies that are still mad hungry for it, so please just show it to us or whatever. Just a clip, even. I could jerk to a clip. Email me bruh. I still have the Yogi Berra book I bought off you. You can borrow it whenever you want. I love you, baby.