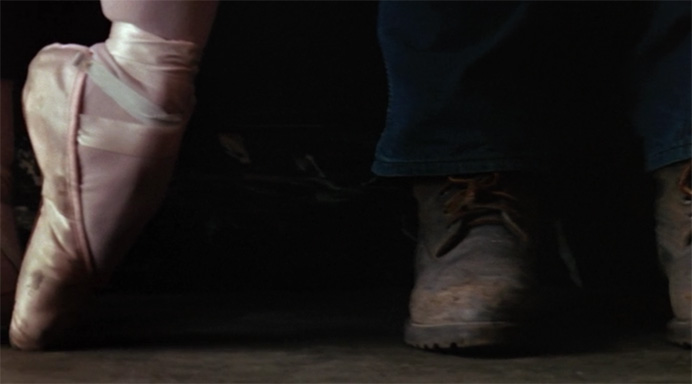 I think it has to do with it being so iconic to its era that people have become blind to its timeless themes and legitimate beauty.  It’s mistaken for a glamorous romp about a girl with high heels on, when really, it’s the struggle of a woman alternating between bare feet and work boots.  It’s remembered as an ‘80’s movie’ for silly, surface reasons, but really, it’s a human movie.

Don’t get me wrong, it’s not without its stupid scenes, most of which do involve high heels.  But even those scenes aren’t without charm.  Yes, trampling over graveled train tracks in heels doesn’t make sense—but I’m too excited about the gorgeous setting and lighting and cinematography to care.  Yes, the fact that she can dance like mad and run faster than a man in them doesn’t make sense—but I’m too intrigued by the fact that her character wants to, to care.  And yes, the bar where she dances at night has too many good stage props for how poor it seems, but the characters inside it are too well crafted for me to care.

Accept that this movie is essentially a musical comic book, and you’ll enjoy it way more.  Every shot is composed like a panel—the faces and hair of the characters lit and placed exactly how they should be in frame in order to illicit the vibe they need to.  The side characters—the comedian friend, the bar owner, and the antagonist’s sidekick Cecil—are all particularly entertaining, and are always quipping the exact right lines to provide comic relief, while still experiencing parallel struggles to that of the protagonist.   Every visual exaggeration and every word of dialogue relentlessly serves the theme—emphasizing how funny, scary, and exciting it feels to do what you actually want to do, such as live by yourself.

She works in her boots all day so she can pay the rent, then comes home and takes them off, not to relax, but to strip herself of the world so that she can do her real work.  There’s no glory in this, and it’s hard to tell whether she’s getting anywhere or just going insane.  She dances—but no one watches her.  She enjoys when she sweats, because to her, it means she’s making progress.  She is getting to know herself.  Her mind and body are becoming one.  All of this is said with music and dance numbers, no words, and because it expresses so much through just movement, I kinetically felt it.  I have always had terrible posture, but after watching this, I found myself standing more like a dancer does, and positioning my feet with more intention.  This isn’t just an imitation of a style—it’s an outward expression of an inner confidence developing.  It’s like in the scene where she sees dancers on TV, straightens up without thinking about it, and then spins, spilling her Pepsi: 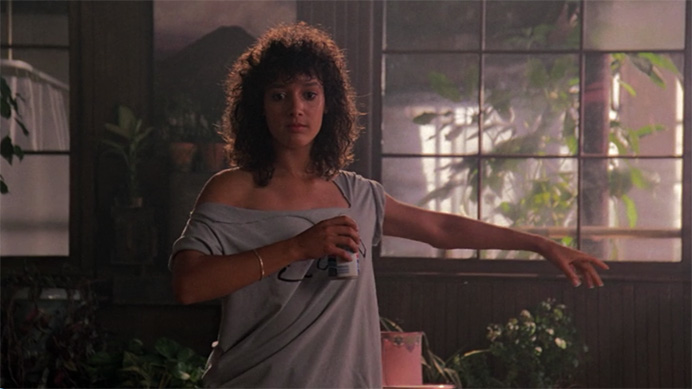 My favorite scene though is where she enters the ballet school to pick up an application, and we see the contrast between her rugged work clothes, and a sea of leotards and ballet slippers.  On the surface, they look more like dancers than she does, but they’re just people who signed up for someone to tell them how to be dancers, whereas she’s a working dancer.  Yet, she’s the one who feels intimidation.

This movie reassures us that, even though it can be scary that you don’t look the part of what you want to be, if you’re doing what you need to do to make it happen, you will become a unique person who gets shit done, and you’ll realize your dreams in your own unique way.  Because of this, I think she looks way more beautiful in the scenes where she’s in jeans and boots than the ones where she’s in dresses and heels.  To quote the song Express Yourself by Charles Wright & the Watts 103rd Street Rhythm Band (a song not on the soundtrack, but thematically, it might as well be) “It’s not what you look like when you’re doin what you’re doin, it’s what you’re doin when you’re doin what you look like you’re doin.”