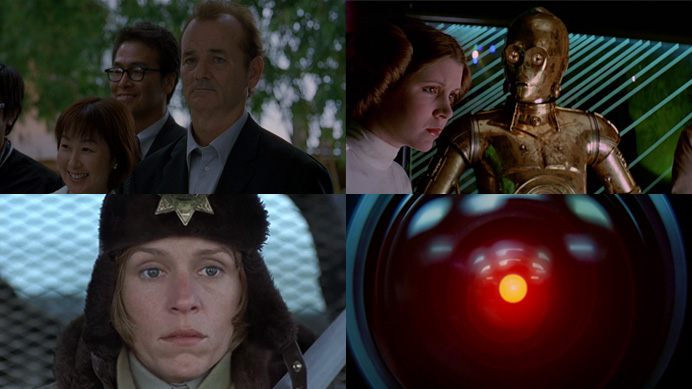 There’s a small moment in Sofia Coppola’s Lost in Translation that’s stuck with me more than the rest of the movie (a movie which is little else besides small memorable moments). It’s the morning when Bill Murray’s character Bob is supposed to leave Tokyo, but he’s all tore up because he’s fallen for the young, idle Charlotte, who’ll stay in Tokyo after he’s gone. Whomever that group of Japanese suits is that’s been hauling from him from job to job wants a picture with him (because he’s a movie star I guess) so they all line up. But when they go to take the photo, Murray’s smile fades and his gaze wanders to watch Charlotte walk to the elevator. The look on his face is packed with enough longing and conflict and anguish to fill a sushi boat—yet his expression is pretty bare. It’s kind of a frown, but not exactly. He looks more tired than anything. It calls to mind the zombie mimicking instructions from Shaun of the Dead: “Vacant, with a hint of sadness. Like a drunk who’s lost a bet.” It’s also sad as hell. It’s not the realization that they’ll never see each other again that gets to me, it’s that damned stare.

The most poignant moment in Star Wars comes from the same sort of thing. During the battle over Yavin 4, Vader shoots and misses Luke’s X-wing by a hair, but his laser hits R2-D2. Luke reports it, “I’ve lost R2.” It cuts to the rebel war room where Leia, C-3PO, and some guy with a huge mustache are waiting and listening. Upon receiving the message, 3PO turns his head to look at Leia, who doesn’t give a shit that 3PO’s best and only friend just got fried (side note: the apathy shown toward droids by the otherwise sympathetic human characters in Star Wars is one of Lucas’ most ingenious moves). But you can feel the hurt in 3PO’s eyes. He turns back slowly after Leia doesn’t even acknowledge him, and you just wanna cry. But how is that possible? He’s a damned robot, and his face is literally static.

Complex, conflicting emotions don’t telegraph themselves in the form of contorted muscles like more base, transitory emotions do. They’re often accompanied by thousand-yard gazes and silence. And filmmakers know to exploit this. Whether Lucas and Coppola knew it or not, they were using a directorial trick almost as old as the cinema itself, the Kuleshov Effect. The idea is basically that if you give the audience dots, they will connect them. In the original experiment, the same close up shot of an expressionless man was interposed with shots of various objects—a dish of food, a child’s coffin, etcetera—and each time it cuts back to the actor, he’s suddenly conveying some new emotion—even though he really isn’t.

Those shots of C3PO and Bill Murray mentioned above, if taken out of context, don’t convey much meaning or emotion. If you don’t know what’s going on, they just look like what they are: blank stares. But because of their juxtaposition with more overtly intense content, they take on extra meaning. The power of suggestion is truly a powerful thing. Our eyes will gravitate toward whatever aspect of a facial expression is available to reinforce the idea the director has implanted in our heads. If we’re made to believe a character is sad, then our brain will seek out those things that might communicate sadness—the drooping of an eyebrow, what have you. But it works even when the cues aren’t easy to pick up on, such as in the C3PO example. Blank stares are blank slates—they can be so very effective because they allow the viewer to project whatever emotions they are feeling onto the character. And since we’re creating the specific emotions ourselves, they feel that much more immediate and personal and real.

The blank stare is a secret weapon wielded successfully by only the most confident directors and actors. It takes a still camera and a long pause (sorry, Michael Bay) plus and an actor Who’s Seen Some Shit. Many movies feature blank stares, though not many do it very well. Saving Private Ryan comes to mind (in fact, the ‘thousand-yard stare’ idea comes from depictions of PTSD’d soldiers). I love Tom Hanks, but his thousand-yard stare at the end feels kinda forced. Blank stares require an effortlessness only the real experts, such as Murray, can muster. And, Frances McDormand.

Frances McDormand gives perhaps the best blank stare ever, and hers is not so fleeting or ambiguous as those above. In fact, it’s as calculated as they come. At the end of Fargo, her character—a competent, confident, but charmingly dopey police officer—takes an unexpected trip into the heart of darkness (which in this case involves an executed hostage, a wood chipper, and a lot of bloody snow). After making an arrest, she drives the perp back to what I assume is Police HQ. You can’t be sure though, because the entire scene is essentially a single shot lingering on her face as she drives. She’s quite pregnant, about to have her first child, and the scene she’s just witnessed, the result of a dispute over a few tens of thousands of dollars, has turned her world upside down. The defeat and wonderment in her expression could loosen the strings on the tightest heartdrum. The Coens milk it for all its worth, and create one of the best understated endings in movie history, ending the dark comedy on a note of utter resignation.

McDormand’s blank stare may be my favorite blank stare ever, but none exemplifies the Kuleshov Effect better than, wait for it, HAL 9000’s. The death of HAL in Kubrick’s singular 2001: A Space Odyssey inexplicably manages to be one of the saddest death scenes of all time. But, as in Fargo, it’s no accident (as if a Kubrick moment could ever be accidental). Throughout the movie, Kubrick cross-cuts to extreme closeups on HAL’s eye-lens thing. These shots are often creepy (HAL’s omnipresence throughout the beginning of the Jupiter Mission) occasionally charming (HAL’s admiring of Dave’s drawings) sometimes sinister (after HAL murders the crew) and, in HAL’s final scene, that same red dot evokes intense sympathy—all from the same basic shot, just embedded in different moods. As Dale is pulling out his electronic guts, HAL begs for his life. He may be an AI that exists as part of the spaceship itself, but his interface with the human crew, that little eye-lens thing, is the audience’s window into his emotional state. And at the moment, he’s fucking sad to watch. If you doubt the power of the Kuleshov Effect, watch 2001 again and pay attention to the HAL closeups (or Google it, it’s been talked about at length).

The blank stare is a powerful trick, a cinematographic sleight of hand unique to temporal multimedia (movies, TV, video games, etc). Sometimes allowing the audience to fill in the gaps emotionally can go further than spelling it out to them—no amount of pouting or shouting from Anakin in the Star Wars prequels could ever be as affecting as that one C3PO glance in A New Hope. Pixar struck box office gold by basing an entire character off the idea of audience projection, with Wall-E. His head is a damned pair of binoculars for crying out loud, but that’s the ticket. With those huge round glassy puppy dog eyes of his, it’s impossible not to see your own inner child reflected back at you, whether he’s staring off into space in awe or falling in love at first sight.

4 thoughts on “A Blank Stare Is Worth A Thousand Words”