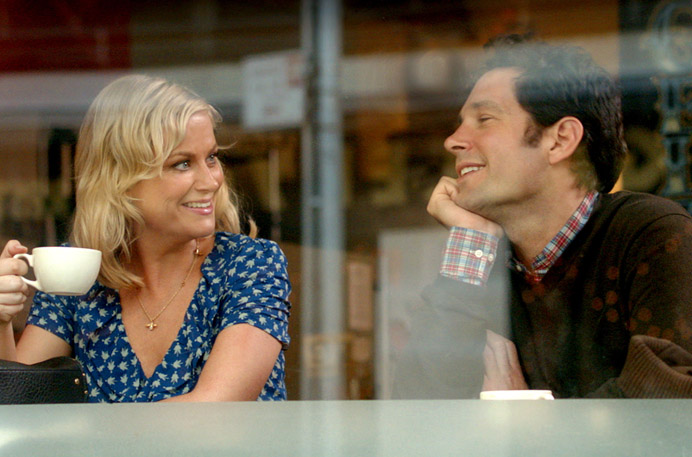 You don’t need a review from me of They Came Together—it’s great, it’s hilarious, go watch it. I saw it two nights ago and I plan to see it again pretty soon. It’s just too damn good.

Surprisingly, it has a 68% on Rotten Tomatoes. I don’t mean that I was expecting it to have a higher rating—quite the opposite, since some of the cleverest and most subversive comedies of the last twenty years have very low ratings: Freddy Got Fingered, MacGruber, Hell Baby, The Brothers Solomon, The Goods, The Wrong Guy, Reno 911: Miami, Nacho Libre, even Step Brothers. The list goes on—those were just ones off the top of my head. Oh, and toss two of David Wain’s previous films on that list too, while you’re at it: Wet Hot American Summer and The Ten.

The culprit seems to be that most critics don’t try and understand comedies like they do dramas. It doesn’t occur to them that maybe the reason they’re not laughing isn’t because the jokes aren’t funny, but because they don’t get them. These hypocrites don’t see their own sense of humor as a brain muscle in need of toning, whereas they’ll spend their whole lives consciously strengthening their understanding of ‘mise en scéne’ or ‘auteurship’ or ‘symoblism’ or ‘dialectics’ or ‘semiotics’ or whatever.

Comedy is a genre like any other, with myriad rules and ways of breaking said rules in interesting and clever ways—to dismiss it arbitrarily as best appreciated in a pass/fail, knee-jerk way makes no sense. Yes, in the moment you either laugh or you don’t laugh, but you can educate your comedic palate by, over time, exposing yourself to its many styles and approaches. But few critics do that—and worse, they often see themselves as above the comedy they’re judging, as though not liking it makes them superior.

Basically, these people don’t realize how dumb they come off, trying to seem mature and smart.

Take, for instance, Christie Lemire of RogerEbert.com’s review of They Came Together. She clearly has no interest in understanding something she doesn’t immediately understand—if it’s comedy, at least. (Who knows if she takes this same approach with all genres. I hope not.)

“They Came Together” means to make fun of romantic comedies the way “Airplane!” goofed on disaster movies and the “Naked Gun” films spoofed detective flicks. The result is actually more in line with Gus Van Sant’s ambitious but ill-advised shot-for-shot remake of “Psycho.”

I’ll let it slide that she doesn’t understand that The Naked Gun (and Police Squad!, the show it was based on) is a spoof of police procedurals, not ‘detective flicks’. That’s a nitpick that would only bug me.

What I can’t let slide is her comparison to Van Sant’s Psycho, which makes no sense whatsoever—They Came Together is not a shot-by-shot remake of a romantic comedy, nor is it a remake of one. I don’t know why she didn’t just compare it to Date Movie or Meet the Spartans or something, if she wanted to make fun of it. To choose Psycho just seems weird.

Director and co-writer David Wain and his usual band of comic pals essentially have made a straight-up romantic comedy. Certainly this could not have been the plan.

Why couldn’t this have been the plan? Does she really think they up and made a film that functions as a romantic comedy by mistake? It’s clear they deliberately structured the film to hit all the rom-com beats they needed to hit, even peppering in genuine feel-good moments here and there, to give the experience depth. In other words, they made an actual movie. Why is this a bad thing?

I sort of get what she meant by her Psycho comparison now—I guess she means that they set out to make fun of rom-coms, but accidentally made one instead? That’s not true though, they did both—the structure is that of a rom-com, and the content is full of jokes and self-referential bits and this that and the other. It’s just not an accurate comparison.

Wain and co-writer Michael Showalter, who gave teenage sex comedies similar (and superior) treatment in 2001’s “Wet Hot American Summer,” obviously intend to parody the clichés and formulas that make so many films in the genre seem so interchangeable.

It’s got all the moments and beats you’d expect—the meet-cute, the instant hatred that turns to flirtation, the perky montage of trying on clothes, the contrived misunderstanding that keeps the couple apart and finally—mercifully—the mad dash to a wedding for some very public, last-minute I-love-yous. But simply recreating what we know to be hackneyed and safe doesn’t suddenly make it hilarious and surprising. There has to be a spin to it; there has to be some innovation.

There is a spin to it, there is innovation. Almost every line in this movie is a joke of some sort, and lots of interesting and unique things are done. I can’t name one film quite like it, even another spoof movie. It’s a snowflake, whether she wants to admit it or not.

Anyone who has seen a movie starring Julia Roberts, Jennifer Aniston or Kate Hudson can recognize what’s going on and find a chuckle here and there. But mostly, the results are shockingly unfunny and sadly lifeless, especially given the wealth of comic talent involved.

Paul Rudd and Amy Poehler star as the Tom Hanks/Meg Ryan types at the film’s center, recounting how they met and fell in love over dinner with an underused Bill Hader and Ellie Kemper. The latter couple is meant to serve as our stand-ins, trying to remain politely charmed by the increasingly inane details they’re hearing in extended flashbacks.

Underused? They’re in the entire movie, and they have many funny moments. Also, they’re only slightly meant to be our stand-ins—mostly, they deviate from that, and have their own personalities and things to add. Clearly she forgot those moments, or wasn’t paying attention to them.

The core of the plot plays like a knowingly cutesy version of “You’ve Got Mail,” but “They Came Together” also features recognizable rom-com nuggets ranging from “Pillow Talk” to “When Harry Met Sally…” Rudd’s Joel works for a giant, soulless candy corporation. Poehler’s Molly owns a neighborhood candy shop that’s “charming and adorable and impossible not to like,” as she puts it. But wouldn’t you know? Joel’s company is trying to run Molly’s store out of business. Can their affection withstand such stress?

Why are you being sarcastic about a plot the film is equally sarcastic about? Who are you showing yourself to be above here? You’re on the same team as this movie, chill out.

And so we watch as they show up for a Halloween party dressed in the same costume and immediately clash. (This is also where the film takes a painful, extended detour for a discussion of whether Christopher Meloni soiled himself in his superhero outfit. Spoiler alert: He did.)

Kind of a dick move to spoil a gag not featured in a trailer or anything.

We watch them fall for each other over books and coffee in an idyllic version of New York City—which is like a character itself in their relationship, we’re told repeatedly, when such a convention should be clear.

‘Should’? That’s the joke. The joke is in telling us repeatedly—it’s a verbal version of rom-coms going overboard with telling the audience it visually.

Throughout this familiar process, the jokes are either annoyingly repetitive or overly spelled out for us.

It’s obvious what they’re parodying—the rom-com is an incredibly common type of clichéd film; its tropes are well-known and well-worn. Still, it’s not enough for Molly to be adorably klutzy; the dialogue has to inform us that she’s adorably klutzy in addition to showing her knocking over a bunch of her belongings in her bedroom before tumbling down a flight of stairs on the way to work.

Is she really not seeing a theme here? An overarching idea that is humorous, of things being spelled out? Wain and Showalter deliberately breaking the old screenwriting adage of ‘show don’t tell’ in a funny and clever and surreal way?

One joke went on for so long I thought something was wrong with the film—like it was stuck or something. I won’t bore you with the details here, but it has to do with a bartender uttering the phrases “Tell me about it” and “You can say that again” over and over as Joel drowns his sorrows.

She’s misremembering this joke in such a way that I wonder if she only half-watched the movie. The parameters of the joke are so specific that I really can’t see how someone could misremember it if they were actually paying attention to the movie—even if you hated the joke, it will stick in your head perfectly.

“They Came Together” clicks sporadically, though, when it takes a chance on totally absurd flights of fancy—a weird date Molly has with her priggish accountant (Ed Helms), for example, or an awkwardly close moment between Joel and his grandma (Lynn Cohen).

There are absurd flights of fancy throughout the entire movie—hell, every scene. The fact that she zeroed in on these two examples is bizarre to me, especially since that “weird date” doesn’t even stick out to me as weird—especially not in the context of the rest of the film. It’s as though she just liked that scene, but couldn’t figure out a reason why, so decided to just arbitrarily call it weird—just like she arbitrarily calls Ed Helms’ character priggish. Pretty sure she only used that word to sound smart, because it doesn’t even describe his character accurately.

Even at 83 minutes, “They Came Together” feels like its conceit has been stretched thin. But a lot of these folks (Wain, Showalter, Marino, Erinn Haynes) are also involved with the series “Children’s Hospital” on the Cartoon Network’s Adult Swim lineup, which sharply parodies the soapy doctor drama. Those episodes last just 15 minutes—which is probably just the right amount of time for such scattered, sketch-based laughs.

Earlier in the review, she says the film is bad because the filmmakers accidentally made a film that is a “straight-up romantic comedy”. That’s an acknowledgment that it does work as a movie, structurally—so much so that it’s to a fault, in her eyes. But now, in her conclusion, she says it doesn’t work, because it’s too sketchy and scattered. Which is it? They’re polar opposite complaints. Either it’s well structured or it’s not well structured—it can’t be both.

That’s the end of her review. She gave the film 1 1/2 stars. If this review had been for a deep, serious film, people would be calling her out for not doing her job, and not at least trying to engage with the film and understand it. But, because it’s a comedy, she will get a pass.