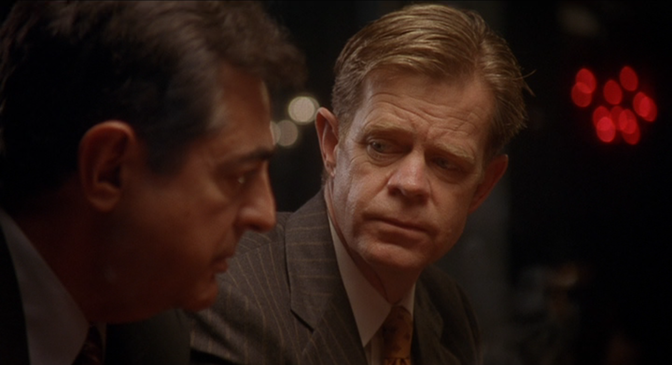 William H. Macy and Joe Mantegna talking about stuff. I don’t want to tell you what they’re talking about. I just want you to see the god damn movie please god jesus fuck.

This review is spoiler-free.

Edmond is one of those movies that just sort of exists, and you can’t remember it ever coming out in theaters, and you can’t remember hearing anything about it, and the poster and DVD cover are completely generic and unmemorable, so you always skip over it when browsing for something to watch, but then one day, as a result of no other movies particularly jumping out at you, you take a look at it, you consider it, you think to yourself, ‘well, Mamet is usually good’, and ‘well, Stuart Gordon is usually good’, and ‘well, William H. Macy is usually good’, and so you decide to give it a try based on that, but even though those things are true, you know with every fabric of your being that it can’t possibly be a good movie, because how could a movie, one with juggernauts such as these involved, slip through the cracks, unless it were a piece of useless shit, but then after the first fifteen minutes, you’re fucking floored, because it is definitely not a piece of useless shit, or even a piece of regular shit, in fact it is the opposite of shit, it is a legitimately good movie, and even though you aren’t too far into it, you feel a sense of calm, because you know you have nothing to worry about, and that you are in safe, masterful hands.

It’s a real shame that this one slipped through the cracks. And I don’t just mean the mainstream cracks, I mean the cult cracks as well. This is one that should’ve been word-of-mouth resuscitated by film geeks when it hit DVD. But that never happened. Or rather, it hasn’t happened yet. Hopefully, with this review, things might change and people might actually watch the damned thing.

I don’t want to give away any plot stuff that will get in the way of you having an organic experience with the damn thing, because this really is one you should go into as blind as possible, since the story is so clever, and unique, and above all else, completely unpredictable. Both Mamet and Gordon have a knack for that in their own right—a similarity that never would’ve occurred to me were it not for this collaboration, since they have such different styles. Styles that apparently mesh quite well. Who knew? Like French’s yellow mustard on baked sweet potatoes (try it, I’m serious) they just fucking work. So trust me when I say that the story is compelling, and the movie works, s please god don’t go snooping around on Wiki or whatever for plot details, okay? Okay.

Edmond is unequivocally the best script Stuart Gordon has ever had the opportunity to direct, and really the only one with good dialogue. Don’t get me wrong, I love the majority of his oeuvre, but it’s no secret that most Horror/Exploitation dialogue sucks. It’s usually stilted and unnatural. ‘Mametspeak’ is stilted and unnatural too—but intentionally and beautifully so. It’s deliberate, it’s stylish, it’s rhythmic. It’s refreshing to hear in a twisted, pulp-y movie like this. It elevates the ‘trash art’ to just plain art.

The story Mamet has crafted is perfectly timeless, and Stuart Gordon recognizes this. He has suitably made sure the scenes and the cinematography look timeless. This is a movie without a decade. It feels as though it could have been made anytime between the 70’s and now. That’s a beautiful thing, because it gives us viewers the chance to be disoriented, to feel unsure of where we are and when. It’s a shame very few directors give a shit about providing an experience like that. Most films that come out have visuals that scream ‘Hey, this film is taking place now! Now! Now!’ or, if it’s a period piece, “Then! Then! Then!” (Kind of a tangent, but I should say that Donnie Darko is probably my favorite example of a movie that is a total fuck you to any and all expectations of what a movie set in the 80’s should look like. Aside from the cheesy self-help tape the kids watch in class, Richard Kelly takes a refreshingly subtle, mature route in depicting the decade.)

Back to Edmond, though. I don’t know what else I can say about this movie without popping your cherry before its fat cock is able to. I mean, I guess I can say that the acting is good and stuff. And that the ‘message’ is good. But I can’t really get into the ‘message’ here, because that’ll ruin shit. God, it’s hard to write a review without spoilers. Just watch it. Please. I have nothing else I can say on the subject.

Oh, and fuck Rotten Tomatoes for this having a 46%. That’s ridiculous. I mean, I know it’s totally not Rotten Tomatoes fault, because they’re just an aggregate, but whatever. Fudge a few numbers when the movie is good. I’m not looking. Nobody’s looking. It’d be so easy. It’s just HTML and stuff. Turn the 4 into an 8. And if people give you shit about it, say it was a mistake or whatever and fix it. But I doubt anyone will notice. There are so many mistakes on that fucking site, dude. I saw one about a month ago on the page for Deliver Us From Evil. In fact, it’s still up there. It has a 99%, with only one negative review. And the negative review is for a completely different movie. Seriously, click it. It’s for some Danish movie of the same title. I tried to report this to Rotten Tomatoes, but there’s literally no way to report a thing to them. The only way to contact Rotten Tomatoes is to go through Flixster. So I did so. No response. And also, there’s a mistake on the page for The Last Stand. The director is listed as Kim Jee-Woon, and if you click his name, it takes you to page where it says he only made like two movies. Except he’s made tons. The rest are on a separate Rotten Tomatoes page for Ji-Woon Kim. Site is fucking ridiculous man. Matt Atchity, get your shit together. I know it’s not necessarily your fault, but I’m calling you out, son.

Four-and-a-half out of five Codys.

One thought on “Edmond: A Movie that Just Sort of Exists and is in Dire Need of Viewing Eyes”