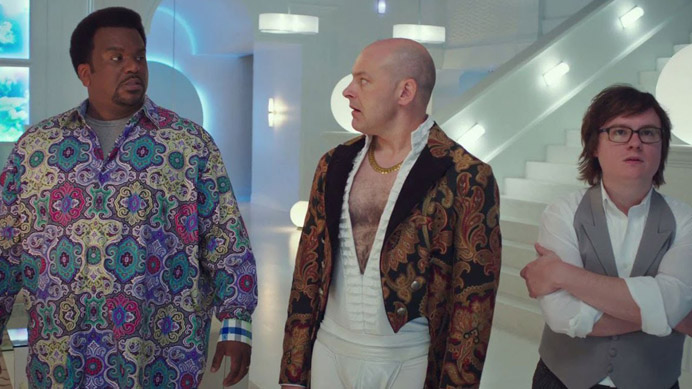 This past Wednesday, John D’Amico and I attended a free advance screening of this film. The following is a conversation between us, discussing everything from the film to the experience of the event itself:

Cody: Alright, so first off, how about that fucking cold ass line? Not blaming the theater for the weather of course, but man that was not the night to be outside on a line for a movie, let alone an ‘eh, I’ll go I guess’ movie like Hot Tub Time Machine 2.

John: Yeah, it was a Soviet bread line and at the end was a Comedy-Central-at-2PM movie.

Cody: We did get a lot done on that line though, at least. We talked about the site and stuff we wanted to do for it going forward in 2015. That was like the most productive Smug Film meeting we’ve ever had.

Cody: That’s right readers, keep your eyes peeled for our future thingies! Alright, before we get on to the movie, we gotta talk about those poor fucking theater employees handling the event. I felt so bad for them—it seemed like some scheduling got screwed up and everyone was trying to play catch up. Chloe Pelletier always tells me that free screenings at the theater she works at are always the hardest and most stressful. This seemed pretty insane.

John: It was BRUTAL! They all seemed so stressed and confused like everything was shifting under their feet, and they were desperate to try and wrangle seats to get everyone out of the cold. The projection was all jacked up too, the tops of everyone’s heads were cut off all through the movie.

Cody: Yeah it was supposed to start at 7:30 and it got pushed to 7:45 because they just weren’t taking people up to theater quick enough. They’d take like 20 people up at a time—up four floors or so—every 15 minutes. It was weird and just seemed like the least sense-making way to fill a theater. And when we finally got taken up there, it didn’t seem like we’d be able to find two seats together. But then this nice dude going to see the movie, who was like the de facto mayor of the audience, switched with someone else for us, and we ended up, stroke of luck, having the best seats in the entire theater. Dead center, screen right in front of our face, seated at the bottom part of the stadium-seated section, so we could basically put our legs out and shit. But yeah, the projection was off right from the start. At first it was a 1.85:1 image projected onto a 2.35:1 screen, and you could see the cut off bits in ghostly form on the top and bottom of the screen, and then 10 minutes into the film they hit a button which blacked out the screen for a few seconds, and then when it came back it just hid those top and bottom sections. So we were watching like, 2.35:1 cropped from a 1.85. Which made for some really weird framing. Any tall character, like Craig Robinson, there were a lot of shots of from like the nose down. And, the colors were off. There was a bluish-greenish hue at the center of the screen.

Alright so, the movie. I agree—Comedy Central at 2PM is surely this movie’s home in a couple years. And probably Netflix in like, two seconds from now. I call these kinda movies ‘Cape Cod movies’, cause they’re the kinda movies I’d see for like $6 while staying with my grandparents (because there’s nothing much else to do at night up there) and I’d feel okay with that amount being paid to see it and that level of entertainment being had.

I felt like the first act was definitely the strongest comedically, the audience seemed really on board too. And then things just got… convoluted? How would you describe it?

John: Well, they had this pretty solid idea for a time-travel murder mystery, and then the further the movie went along, the less interested in that idea it got. Which can be fine as long as the humor keeps up, but the best jokes were the ones related to the premise. And then it just got weirdly hard to follow. Like, characters would come in and out without proper introductions or context.

Cody: Yeah, it almost felt like there had been multiple, distinctly different drafts of the screenplay, each with its own idea for a premise, and the finished film was like a hodgepodge with some small remnants of the other premises—making it damn near impossible to follow. Whereas, if it had just been simply the murder-mystery thing, I think it could’ve been a tight, breezy little film.

John: You could feel it in the editing too—it all felt like a first pass. Transitions were awkward, and the through line just wasn’t there.

Cody: Rotten Tomatoes says it’s 93 minutes, IMDB says it’s 101 minutes, I have no idea how long the cut of it we saw was but it felt like they could’ve shaved off 10, easily. Most blatantly, there were a few cutaways to like, side characters, like Adam Scott’s characters’ wife, that just had no purpose whatsoever and weren’t funny. That’s another thing—you could really feel every single joke that fell flat. Like, we had a good, responsive crowd, with seemingly a good sense of humor. The good jokes got laughs, the bad jokes got nothing. If anyone from the studio had been taking notes based on laughs, they would have had a really good map to go on, as far as tightening up the film.

Who do you think was the strongest in the film?

John: I think Rob Corddry really tried, but his character just wasn’t interesting enough to hold the amount of the movie he’s expected to. Clark Duke is fun, but has the same problem. Craig Robinson got to kick back in the background and was, as usual, very funny. Adam Scott’s great, so it’s really a shame how bad his entire plot thread is. It starts with this really broad awkward bit where you find out how emasculated he is, then it gives us his obligatory wilding out party scene, but it’s all so sloppy and lazy, especially compared to similar moments in much better films like Neighbors.

Cody: Definitely agree about Adam Scott. It was like they barely even came up with an idea for his character. You can damn near see him struggling trying to do his best with nothing. And Rob Corddry’s character isn’t great either—it’s kinda one-note, one-mode. He has a ton of dialogue in the film, and it’s just way too much. And, any forced change in his character just comes off as extremely forced. Clark Duke was pretty good, I like his delivery. And Craig Robinson is just always good. It felt like the crowd really loved Craig Robinson the most, and they were right.

Especially with the bad characterization and everything, the film kinda feels like a fan fiction that some superfan of the first film wrote as like a writing exercise. Like, you can tell that the writer likes the characters, but at the same time you can tell that they don’t truly understand them—and thus, can’t write them well.

John: That reminds me that my favorite line from the first movie was only in the trailer—it’s where Clark Duke is explaining time travel, and concludes with “I write Stargate fan fiction, this shit is my bread and butter!”

What’d you think of the first movie?

Cody: Haha, yeah that’s weird that that line didn’t make it into the actual movie. I remember it very distinctly. Great little line.

I like the first one—I’ve only ever seen it once though. Never felt a desire to watch it again. It’s way better than this one of course, but there’s still something about it where it seems like it lacks rewatchability. There just doesn’t seem like there would be much else to be mined from it, from a repeated viewing.

John: The first one had a lot of fun with how ridiculous the premise was, but once you go back to the well, it ain’t ridiculous anymore. The second one can’t be carried by that same audaciousness that kept you gliding over the shitty parts in one. And, I never would’ve said it, but we really needed Cusack to hold it together.

Cody: We did, man. It’s weird to say, since he wasn’t even that funny in the first movie, and in recent years he’s kinda just become a politics-obsessed mope on Twitter, but dammit, we needed the guy. If he wasn’t in it because he didn’t like the script, I can’t blame him though.

I feel like there was no real main character, without Cusack. There were just people doing things. It felt like when you’re used to hanging out with your friend and their friends, and then one time you’re stuck hanging out with just their friends and not your friend, and it’s awkward and you don’t really have much in common or anything to talk about.

John: Yeah, that’s a good way to describe it. It was awkward all around, like they went hard on explaining stuff you already understood, and then missed explaining the basic stuff you didn’t.

Some of it was funny, though. There were some really solid jokes near the beginning about the way they used their knowledge of the future and everything. I’d like to have seen more of Craig Robinson’s subplot about stealing a ton of pop songs and then failing when he released an original, but even that felt weirdly developed by the end. They had a big moment of redemption for him, but didn’t press you enough with the failure.

Cody: Yeah, I really thought that ripping people off thing was going to be a main crux of the goings-on, like a moral to the story, because they set it up so hard in the beginning of the film. There’s a great little scene towards the beginning with Craig Robinson and a cameo from a pop singer, and it had more emotional weight than anything in the entire movie, by a wide margin. It really shoulda been the genesis for the storyline, if they wanted the film to mean something deep.

Cody: I guess deep isn’t the right word, I guess I mean just something not paper-like in substance. 3D rather than 2D.

Alright, so what would you give this out of 5? And, any final thoughts on this movie before we likely never think about it again?

John: Like a 2? Ya know, it’s all these big, empty, colorless sets, whereas the first one was all cluttered and colorful and goofy—that kinda says it all to me. The first one had a lot of weird charm, whereas this one was the obvious disappointment we knew was on the way.

Cody: Yeah, 2 sounds fair. To it’s credit, I enjoyed it more than I expected to, and it was funnier than I expected. Just not a good movie, though. Also, it’ll probably go down as one of the most lazy travel-to-the-future movies, as far as design. The art direction was damn near non-existent.

A Cody Edit: After posting this piece, the following information came to our attention, which perfectly encapsulates what is wrong with Hollywood. That would’ve been fucking amazing.