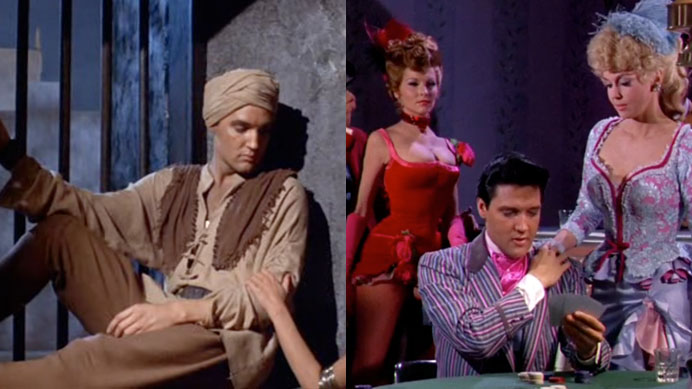 “I don’t know how you can manage to watch all these movies,” a friend said to me the other day.

“As long as you keep your expectations low and your interest in looking at Elvis’ ass in tight pants high, they’re not too bad,” I said. “They’re mostly under an hour and a half, at least.” 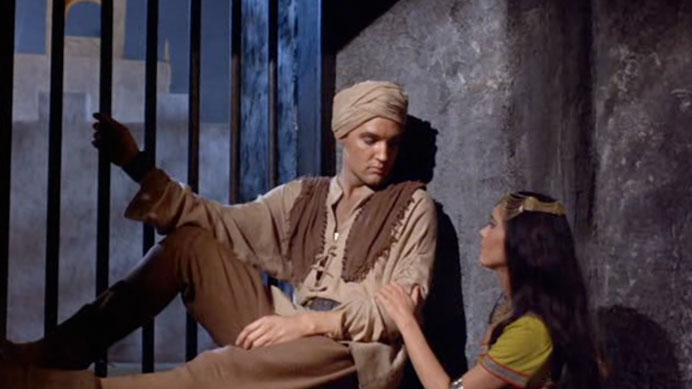 Johnny Tyrone (Elvis Presley) is an American movie star visiting the Middle Eastern country of “Lunarkand” on a diplomatic visit. After screening one of his movies (in which he karate chops a leopard) he stiffly serenades the crowd with a bland song and ends up being invited to some isolated kingdom by Prince Dragna (Michael Ansara). On their way over, Johnny tries out his moves on the beautiful but mysterious Aishah (Fran Jeffries) but ends up getting knocked out and kidnapped.

When he comes to, he’s introduced to his abductor, Sinan (Theo Marcuse) who announces “I am the Lord of the Assassins.” Johnny then delivers the funniest line of the film: “Well I’m the Sheik of Araby. What do you want from me anyhow?” Sinan says they brought him here to use his sweet karate skills to assassinate King Toranshah (Philip Reed) and even Johnny is rolling his eyes at this point. After he gets his ass literally whipped by the Assassins for declining their offer to murder somebody, Johnny manages to escape with the help of some sleazy guy named Zacha (Jay Novello).

Cut to King Toranshah playing chess with his daughter, Princess Shalimar (Mary Ann Mobley). Prince Dragna busts in and tells him about Johnny’s capture. The King sends Princess Shalimar to their summer cottage to be safe while he puts the city on lockdown. Johnny then just happens to randomly jump a wall in an attempt to hide and lands right on Shalimar’s tent. He explains to her who he is and what’s happening, and she, of course, is immediately smitten with him. She pretends to be a slave girl (you know, decked out in gold and silk) just in case though. Eventually, she runs away to alert her father of Sinan’s plan, leaving Johnny pining and still stuck having to deal with that Zacha guy.

Zacha sneaks them into the city and tells Johnny there’s a Ramadan celebration in town, so he may as well put his singin’ pipes to good use and get some quick cash. He performs with Zacha’s group of belly dancers, a drummer, two kids, and a little person. After a little while, the police notice them pickpocketing, and chase them out of town. The Assassins then find their hideout, and tell Johnny they’ll kill the two children unless he goes and kills the King.

Johnny and the dancers are sent to the King’s chambers but the plan is foiled when Johnny– dressed in like, a burka and looking super stabby– straight up tells the King what he’s there to do. The King flips out and the whole lot gets thrown in jail. Johnny is worried for the wellbeing of those children but also still wondering about that hot slave girl he met earlier. Shalimar, in turn, is also pining away for him in her room—disappointed at, y’know, his attempt to murder her father.

Johnny stages a jailbreak, and shows up in her bedroom via the ceiling. The King draws his sword, but Johnny explains everything, and everyone’s cool. The King then decides to stage his death so they can draw out the traitor in his kingdom. Turns out it was his brother Prince Dragna and pretty lady Aishah (who’s now just looking like a bootleg Modesty Blaise in her all black jumpsuit). But Sinan has tricked even them, as he is the one who holds all power in the end.

There’s a big battle in which the townspeople sneak up on the assassins, who are, quite frankly, terrible fighters. I mean, they keep getting fouled up by their own capes—come on. The background music during this is somewhere in between Aladdin and Pee Wee’s Big Adventure. And then the movie ends with a big Vegas musical number in which Elvis literally strolls around stage and doesn’t dance one bit.

Harum Scarum has been on my radar as one of the supposedly most cringe-worthy Elvis films, but I’ll be honest with you guys—I thought it was pretty much fine. I mean, alright, the fact that this movie is made up of white people (except for one of the bad guys who’s Lebanese of course) dressed up in medieval-1960s ‘Arabic’ costumes standing next to Afghan hounds is pretty bad. But, it’s hard to even call it racist in the sense that there’s literally nothing Middle Eastern about the movie except the mention of Ramadan. It’s basically like a lesser episode of Star Trek, in that they might as well just be amidst a vaguely Middle Eastern/Moroccan-inspired ancient alien race. So, I’m just going to go ahead and say this movie took place on another planet—it makes more sense this way, and also makes the movie more digestible.

Elvis looks bored out of his mind in this one, which is sad because he was super psyched to do it initially. I can see why—finally here’s a movie with a plot that goes beyond singing and flirting, and takes place in a very different place (on another planet). But alas, Elvis soon realized what we all realized—it’s a stinker. He spends most of his time karate chopping or just wandering around set with dead eyes lip-syncing to bland music.

My favorite review of this film has got to be Vincent Canby’s review, which made me laugh out loud. He had to watch Harum Scarum as a double feature with Japanese monster movie Ghidorah. “Elvis is prettier than Ghidorah, and has two fewer heads, but both characters are definitely the products of the special effects departments.” Sounds like a double billing somebody needs to recreate!

Best Song:  As I said, Elvis is bored out of his mind in this one, but there are a couple amusing songs, such as one with Elvis’ reflection singing from a pool, or a really dramatic song in which Elvis does a ton of emoting from jail. But “Mirage” is by far the best song, with Elvis waking up after being kidnapped surrounded by scantily clad slave women. 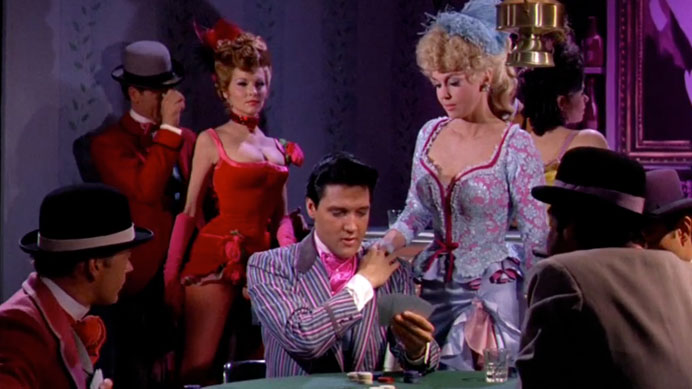 Johnny (Presley) is a singer, his girlfriend Frankie (Donna Douglas) is a showgirl, and they both work on a Mississippi riverboat casino. Johnny, who just so happens to be a compulsive gambler, is in constant debt. He decides to go with his friend Cully (Harry Morgan) to visit a gypsy fortuneteller in an attempt to turn his luck around. Gypsy queen Zolita (Naomi Stevens) predicts that Johnny will find fortune with a redheaded woman—Johnny frowns, because Frankie is blonde.

In walks Nellie Bly (Nancy Kovack) a sultry redhead who just so happens to be the main squeeze of the owner of the boat, Clint Braden (Anthony Eisley). She blows on Johnny’s dice, picks a number, and he wins big. Frankie finds out about it and tells Johnny to knock it off with the lucky redhead or she’ll leave him. This drama inspires Cully to write a big musical number named “Frankie and Johnny,” in which Frankie finds out that her boyfriend Johnny is two timing her with a showgirl named Nellie and so she shoots him dead. (Nice.)

A big honcho from New York City just so happens to see their performance, and says he’s willing to buy the show for Broadway. Meanwhile, Braden is getting jealous about Johnny’s relationship with Nellie, despite the fact that he himself has been cheating on her with another showgirl named Mitzi (Sue Ane Langdon). The question of if they can get the original cast to Broadway is then up in the air.

Johnny feels guilty, but torn—he loves Frankie, but Nellie is great for his addiction. So he decides to try another redhead (a random drunk girl) to make sure the gypsy wasn’t lying. Indeed, it seem his luck lies with the gingers.

Mardi Gras happens, and they all attend a big costume party. Frankie, Nellie, and Mitzi end up all in the same costume as Madame de Pompadour (perfect Elvis movie choice) while Johnny is dolled up in western wear (perfect again). The girls hash it out and realize that there are actually no clashes between them—Frankie wants Johnny, Nellie wants Braden, and Mitzi is well, out of luck. They then set up a scheme for Frankie to impersonate Nellie’s voice to see just how far Johnny will actually go with Nellie.

Frankie, pretending to be Nellie, goes off with Johnny and blows on his dice. Thinking he’s with his good luck charm, he ends up winning big—$10,000 big. He kisses ‘Nellie’ out of excitement, and Frankie flips out and slaps him. As she walks away, the real Nellie walks over and decides to kiss Johnny to get back at Braden. Johnny recognizes that “no two girls kiss alike” and pushes Nellie away. Braden shows up and beats the crap outta Johnny for kissin’ his girl. To make matters worse, Johnny tries to apologize to Frankie, but she just throws all of his winnings out of a window.

Eventually, everything gets ironed out—I mean, all Johnny has to do is serenade Frankie from a window, and they decide to move on to Broadway. Unfortunately for Johnny, one of Braden’s henchmen decides it’s a good idea to load the prop gun from their performance with real ammo and not tell anybody, so Johnny gets actually shot on stage and everybody screams. I won’t say what happens next, but it’s an Elvis movie, so I’m sure you can figure it out.

Uhh, I loved Frankie and Johnny. They heard my prayers from Tickle Me and made a straight up Elvis period drama! This is a pure, camp-tastic, silly musical with no airs otherwise. Between the awesome costumes and great sets, Frankie and Johnny has all the charm of a Stanley Donen production mixed with the bright cheerful colors of a Jacques Demy musical. Plus, if you ever wanted to see Elvis in a sparkly black tuxedo or a hot pink silk cravat, boy have I got the movie for you.

And, Elvis looks like he’s having fun for once! Smiling Elvis, I remember you! Sure, the music is fairly throwaway, but at least it’s different—it’s all orchestrated numbers, with nary a cheesy 60’s guitar song to be found. Plus, he gets to play a compulsive gambler, and Elvis seems to love the flawed hero– if for nothing else than the added character depth. He wears it well, chasing whatever brings him luck at the expense of his own career and relationships. Plus, I mean, this man was made for ruffles and waistcoats.

I liked the women too, even though they were fairly cartoonish. They had some good lines, such as, “Is this the right costume to go out with the wrong man to get the right man to marry you?” You said it, lady. I don’t think this movie would pass the Bechdel test despite having three female leads, but I did enjoy that all of the main women made peace sooner rather than later. Though poor Mitzi basically dies alone for being easy. Frankie was a bit too girl-next-door considering she was dating a gambling fool, though she was pretty on her game once competition came around. As for Nellie Bly being a showgirl, well, Nellie, I’ll always remember you as an investigative journalist/amusement park in Brooklyn.

Best Song: Definitely the titular song, for the staging alone. It’s like a lesser but equally as pop-arty “Gotta Dance.”