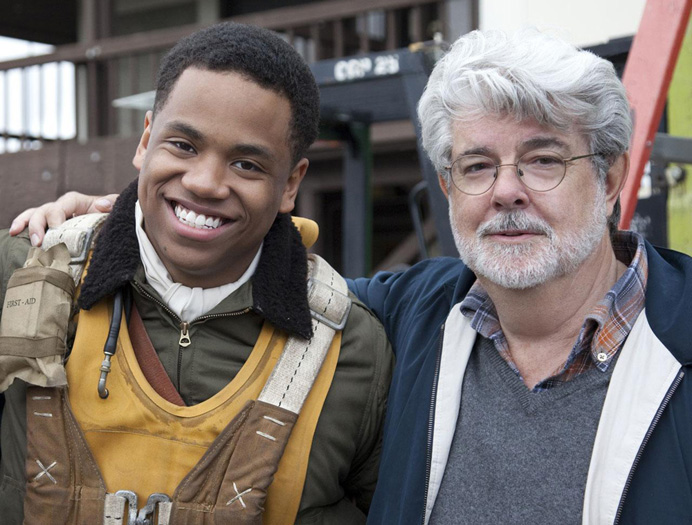 Unlike the Star Wars prequels, here’s a plot young kids can actually follow.

Right off the bat, I should warn you that Red Tails is not a good movie. At least, not in the traditional sense. It’s not even good ‘for what it is’. It’s just plain bad. But you will have a good time. You’ll be laughing at ineptitude in damn near every scene, and, even with all its cheesiness, this movie will touch you on a very deep level—in fact, partly because of its cheesiness. Let me explain.

Do you remember the kinda books you used to blow through like crazy as a kid? Those 49 page chapter books, double spaced, with big print and no big words? Red Tails is basically one of those, in movie form. Watching it transported me right back to my childhood, sitting in bed, a small lamp on, quietly reading a whole damn book in one sitting. Instant time travel to a period of my life I quite frankly hadn’t thought of in many, many years.

I’ve never seen a PG-13 movie quite like this. It is so unrelentingly dumbed down that at first it seems like parody, like maybe Trey Parker and Matt Stone made it or something. But you quickly move from ‘wow this acting is awful and this dialogue is hackneyed and this story is oversimplified and this director sucks’ to ‘holy shit these are all deliberate stylistic choices and this film has more consistence and daringness-to-be-different than most films’. It wins you over with its sheer balls-out desire and commitment to making a movie specifically for 10 year old boys.

Most kids movies these days aren’t even for kids. They’re overstuffed with pandering fluff clearly for adults—jokes and references that kids can’t possibly get, and depressing elements designed to give the story ‘rawness’ and ‘depth’ (something only aging hipster parents care about). The abysmal wreck Where the Wild Things Are is probably the best example of this in recent history, but it also happens in movies you would not expect in a million years for it to happen in. Mr. Popper’s Penguins comes instantly to mind.

Bored one night, searching through HBO On Demand, I decided to give that one a shot. Not because I thought it’d be any good of course—basically, I was curious to see just how bad it was. Well, It was worse than I ever could have imagined, and, on an entirely different level than I could have imagined. The first few scenes of this supposedly light family flick are about a dad who just plain isn’t there for his son. Over and over. Throughout the kid’s entire childhood. And then that son grows up and is Jim Carrey, but not happy, fun Jim Carrey—depressed Jim Carrey damn near from Eternal Sunshine. Sad Jim Carrey then proceeds to have long, boring conversations in his office with some boring adults—conversations so boring that I, an adult, couldn’t even follow them. And then he goes home and has a dysfunctional conversation with his teenage kids who just plain don’t like him at all. Their relationship is legitimately sad and completely unfunny. There is not a single laugh—or even an honest attempt at a joke—in the first act of this movie. Need I remind you this is a movie that’s supposed to be about a bunch of CGI penguins and Jim Carrey getting into hijinks. How fucking depressed and hateful do you have to be to write something like this, knowing full well that children will be going to see it? It’s purely sociopathic filmmaking. If I were a parent who brought my youngster to it, I’d ask for my money back.

Red Tails at least attempts to please children, and speak to them on their level. Which means that even if you don’t have the same visceral, warm reaction to the film that I have, you have to admit, its heart is in the right place. This movie aims to please. It’s simple, easy to understand escapism for a segment of the population who just plain has not seen many movies—and thus, the elements which read as hackneyed and lazy to us are probably quite enamoring to a child. Maybe it doesn’t aim to please you, Mr. Twenty-Something, but not everything has to be about you, you know. You’ve been spoiled far too long by your favorite Parks and Rec and The Office actors showing up as voices in CGI kids movies or whatever. Here’s a movie that refuses to pander to your specific and equally annoying sensibilities. Deal with it.

Yes this movie made me feel like a kid again, but don’t get me wrong, I felt like an adult too. I laughed at shit that I wasn’t ‘supposed’ to laugh at. This movie is a a veritable hot bed of unintentional comedy from the get go. Hell, I laughed harder at the shockingly piss-poor font choice for the opening credits, and its obtrusive placement during what was supposed to be an action scene, than at any ‘comedy’ in recent history. And don’t get me started on the Germans in this movie. I swear to god, every German in this movie is played by the same gay male model turned actor. I seriously think they just hired one dude and put him everywhere. They all look exactly alike. Again, Trey & Matt-esque.

I refuse to believe the people involved in the making of this didn’t know they were making a hilarious piece of shit. Cuba Gooding Jr., in particular, looks like he’s fighting back laughs in every scene, basically, biting down on a prop pipe for dear life. And the director is Anthony fucking Hemingway, for fuck’s sake. You may not know him by name, but he’s a goddamn modern veteran of TV directing. He’s directed episodes of The Wire, Treme, Shameless, True Blood, Battlestar Galactica, Fringe, and Community. The man knows what good acting is. He had to have known the acting in this movie was hammy. Which means, like I said before, it was a deliberate stylistic choice. Whether you agree with that stylistic choice or not is beside the point. The man wanted to make a cheesy movie for wide-eyed children that have never seen a movie before, so he had the actors give line readings the target audience can wrap their little heads around. You don’t see that often in big Hollywood PG-13 movies. Which makes this movie, whether or not you like it, a pretty fucking singular work.

Look, your mileage may vary. I can’t promise this will open locked doors in your heart like it did mine. At the very least, you’ll laugh at the cheese, so it’s worth a watch. I honestly had more fun watching this than I’ve had watching a Hollywood film in a long time. And I can see myself rewatching it. Hell, I kinda wanna watch it right now. Not even kidding. How many movies that I’ve reviewed on here can I say that about? Only this one.