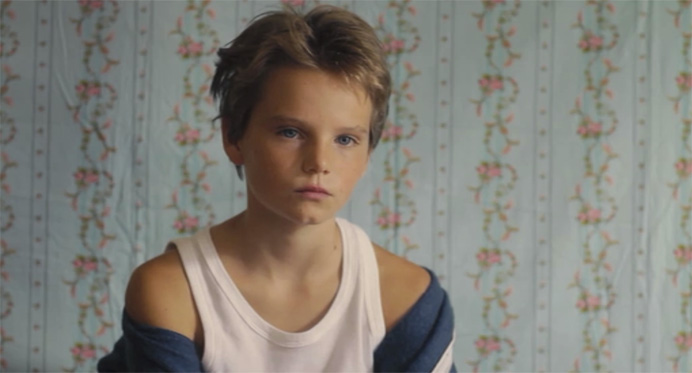 Say what you want about Netflix Instant man, but there’s gold to be found on there if you really look. Sure, their catalogue is padded to the rafters with 1-star stuff, and you’re lucky if you’re able to find more than one movie a week that is truly up your alley. But, if you take random chances here and there, clicking around and trying a few minutes of a lot of different things in a row, sometimes you’ll find something that you never in a million years would have assumed you’d dig, but is so the goddamn movie for you it’s ridiculous. Such was the case with this one, for me.

I figured Tomboy for one of those glorified After School Specials that Liberals seem to blindly love—the kind of movies that get heralded as being ‘powerful’ and ‘important’ simply for making the ‘daring’ point that discrimination/racism/sexism/etcetera exists. To hate on one of these movies for being poorly made is to be ‘insensitive’, or worse, ‘part of the problem’. Don’t get me wrong—the other side of the aisle certainly has their own version of this: movies that are awful, yet have tons of 5-star reviews on Amazon simply because the protagonists are good Christian folk and there’s no cursing. But I digress. The point is, Tomboy is not one of these eye-roll inducing, non-movies. It’s a real movie. Hell, it’s a goddamn suspense film—the best one I’ve seen in ages.

Fuck The Bourne Identity, and Taken, and the rest of those suspense, spy, thriller whatevers of the last however many years. All that shakycam-ing and cutting and whatnot—none of that shit has anything to do with suspense. Suspense is Michael Haneke. Suspense is Chantal Akerman. Suspense is the Dardenne brothers. Alright, that last example doesn’t exactly fit, because the Dardennes do employ shakycam somewhat, but it’s the best damn shakycam you’ve ever seen in your life. Every shot, though shaky, is great, and every cut is great. Makes mumblecore look like a camera rolling down a mountain of boring people. Not that it doesn’t already look like that, of course. But, once again, I am digressing.

Tomboy definitely fits into that latter school of suspense—deliberate shots, real-seeming people, lived-in settings, slow burn. But more than that, it’s essentially a spy story. Our protagonist is a 10-year-old girl who wants to be seen as a boy by her group of friends, and is afraid that if they find out she is really a girl, they will shun her—or worse. I felt more for this girl than I did for the protagonist of any spy movie I’ve ever seen in my life. This shit makes The Departed look like nothing. Which isn’t to say that this movie is ‘brutal’ or graphic or whatever—it isn’t, and it doesn’t need to be. The stakes are plenty high with just the looming threat of being exposed and the close calls along the way.

So many movies try to put you in the shoes of its main character, but only great ones are able to accomplish this. It’s an extraordinarily difficult feat. Making the audience forget they’re watching a movie, and forget the actors are acting, is already hard enough. To be able to, on top of that, convince them that the protagonist’s pain is their pain as well? That’s fucking hypnotism. That’s some next level, voodoo doll shit. And Tomboy does this perfectly. The thought of this poor girl being found out becomes the thought of us being found out, even if we, in our own lives, have nothing to hide—because it’s the thought of our beautiful soul being shown to, and judged by, an unwelcoming, uncomprehending, un-understanding mob of beasts.

“Listen, what’s the most horrible experience you can imagine? To me—it’s being left, unarmed, in a sealed cell with a drooling beast of prey or a maniac who’s had some disease that’s eaten his brain out. You’d have nothing then but your voice—your voice and your thought. You’d scream to that creature why it should not touch you, you’d have the most eloquent words, the unanswerable words, you’d become the vessel of absolute truth. And you’d see living eyes watching you and you’d know that the thing can’t hear you, that it can’t be reached, not reached, not in any way, yet it’s breathing and moving there with a purpose of its own. That’s horror.”

You don’t need to be someone confused about their sexuality, or about what gender they feel best as, to thoroughly enjoy and relate to this movie. This movie is about the human experience of individuality, and having to hide it, for your safety, amidst a tribe. Ayn Rand woulda loved this thing. And how beautiful is that? A feminist movie (on paper, at least) that literally anyone can get behind—even someone who abhorred the idea of feminism.

One thought on “‘Tomboy’: Quietly Reinventing The Spy Genre”