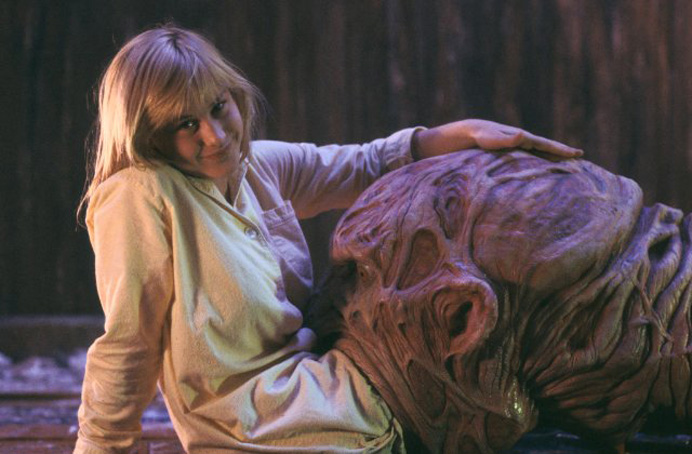 This month, Amazon had the blu-ray set of all seven Nightmare on Elm Street movies on sale for like $23. I’d never seen any of them before, and at that price, I figured now would be a pretty good time to do so. Even though the series is quite uneven, it’s an interesting one. Here are my thoughts on each, with very mild spoilers, if any: 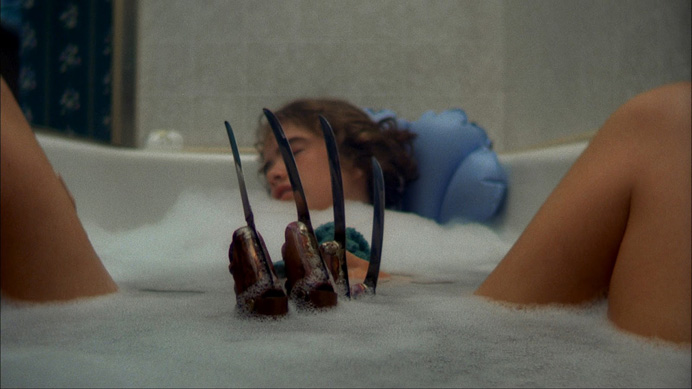 This one is pretty unanimously regarded as the best of the series—which should come as no surprise, since in the case of damn near every horror series, the first is the best (one notable exception being Phantasm II, which I firmly believe to be better than Phantasm, although they’re both great).

Though this is the most solid installment by a wide margin, it’s not the most intriguing—there are two later in the series that give you a lot more to think about, even though they definitely aren’t better movies. Basically, this is the one that is transcendent in a pop culture sense, the one that damn near anyone can get down with, and that you don’t need to be a horror fan to appreciate as creative and groundbreaking and important. The rest of the series is for those of us who truly love film, and as such, like to watch the form be stretched like silly putty to its limits—often to mere breakage, but occasionally into unique and gorgeous contortions.

But the avant garde isn’t for everyone, and those it isn’t for should just stick to this movie, which, don’t get me wrong, is brilliant. No better proof exists of this than how thoroughly it has been plundered. It’s a blatant ‘influence’ of countless horror movies, not to mention Tim Burton’s most iconic output (Edward Scissorhands and Beetlejuice) and even a film as far on the the other side of the cinematic cosmos as you can get—Home Alone. Watch it and see for yourself.

Is it one of the best horror movies ever made? Definitely not. But it’s one of the most important American films, as far as its influence, and unlike highly influential films that are mostly dull (The Godfather, 8 1/2) this one is light and breezy all the way through. 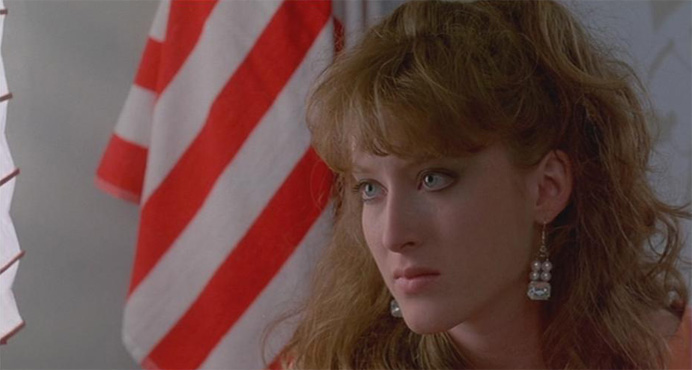 A rushed cash-in with an unlikable and blatantly miscast male lead, script problems everywhere you look, and very few Freddy scenes. But there’s more to this movie than meets the eye.

Whereas the male lead drops the ball entirely, the female lead acts her ass off and nails the role. It’s harrowing watching her character go through hell and back. She sells the tragedy like crazy. This is one of the best horror movie performances of all time, hands down.

The gay overtones of this movie are fascinating as well. There’s a sequence that begins in an S&M club and ends in a steamy shower that plays out phenomenally. The pace and the cuts play with time and space in a deliciously disorienting way that fucks with your memory, as though you have been drugged and can’t tell dream from reality. This is by far the best dreamy sequence in the entire series. The rest approach dreams too much like teleportation.

Lastly, this the only Freddy movie where we get a sense of his personality and pathos. Though he’s barely in this thing, his character motivation is very human, and by the climax, we are witnessing him learning things and actually experiencing complex emotion. In the rest of the series, he’s guarded and showy and one-dimensional. Damn shame. 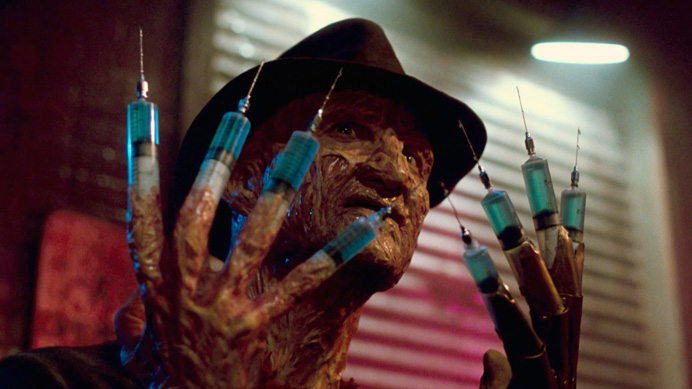 I fucking love the Dokken songs in this movie, and have loved them for ages. ‘Into The Fire’ and ‘Dream Warriors’ rule. And I love Patricia Arquette too. From True Romance to Lost Highway to that Tales From The Crypt episode with the scarecrow, she’s the shit. So I was really expecting to love this one. I didn’t.

There are way too many characters, for one thing. A ragtag group of like seven or eight teens—each with their own one-dimensional, one-liner spitting personality—plus two female leads. With one clear lead, this would’ve been much better. As is, it’s like they had two different ideas for a story and sandwiched them together with no regard for whether said sandwich would be tasty.

The best thing about this movie is the practical effects. It’s worth watching for that. 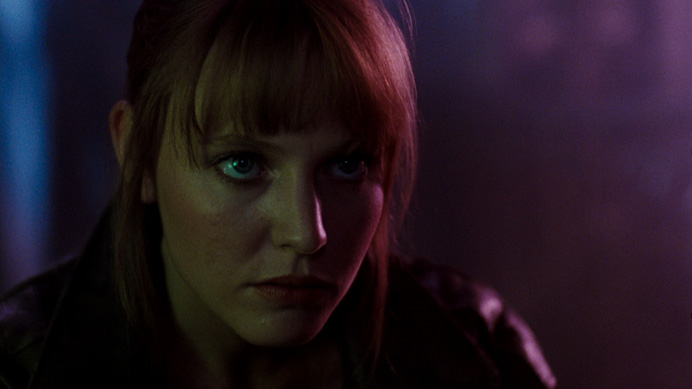 Wow. What a fucking surprise this one was. It’s like they realized the problems of the third one, fixed a good amount of them, and then decided to make the cinematography and lighting and sets absolutely gorgeous for good measure. This is one of the most beautiful looking horror films of all time. And like the previous installment, the practical effects are intensely good. You will forgive the just-okay story and be swept up entirely. 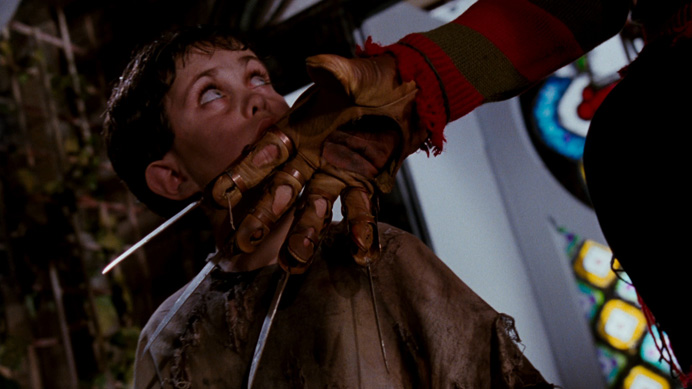 A big drop off. Watchable, but not particularly memorable or interesting. Whereas the cinematography of Dream Master was intelligent and clear, here, it’s hard to tell what the hell you’re even looking at sometimes. And the story is confusing and barely even follows its own rules. It’s just a rushed mess, and it seems like everyone involved was on autopilot. A few of of the practical effects are good though. 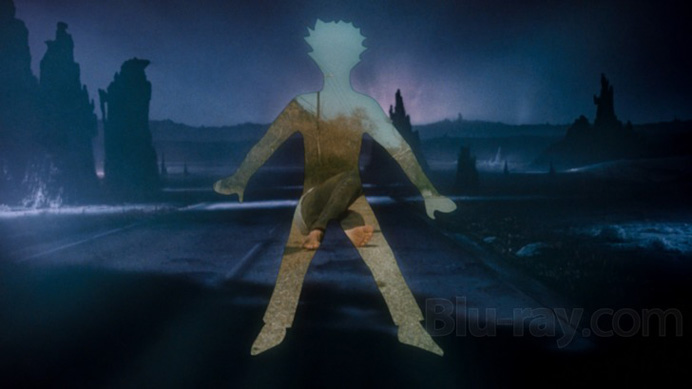 Unwatchable. Feels like it was written by someone who didn’t watch the other movies, heard about what happens in them secondhand, and took lazy notes for a script based on that. I couldn’t make it through the whole thing. Grating as all hell. Points for the Curtis Mayfield reference in the title, though.

I couldn’t make it through all of this one either, but it is at least kinda interesting. Probably the most ‘meta’ horror movie ever. It isn’t successful in that regard, largely due to the fact that it confuses slowness for ‘realness’. This thing takes an eternity to get started, and when it does, it ain’t worth the wait. Worth watching if you love anything meta. Anyone else should probably skip it.