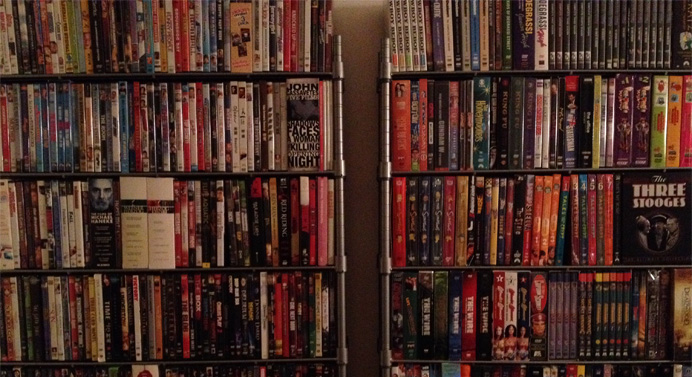 A small portion of my collection.

If you’re reading this site, you probably love movies, and if so, you should probably collect them. Now, before you say “No way, collecting is for turkeys!” and turn me down like I’m a bad influence out of a Ninja Turtles PSA, let me explain—this is for your benefit. Collecting gets a bad rap these days, what with shows like Hoarders and whatnot, but a real collector ain’t like those people. A real collector is fucking G. Not to toot my own horn, but I own over a thousand Blu-Rays and DVDs, and if I sold them all off right now, not only would I break even, I’d turn a profit. My collection pays for itself. I repeat—the movies I love pay for themselves. Wanna be like me? Here’s how.

Never Pay Full Price For Anything

When I say ‘full price’, I don’t mean MSRP (Manufacturer’s Suggested Retail Price). Nobody pays MSRP. What is MSRP, you might ask? Basically, that’s that lame price they automatically cross out on Amazon or whatever. Like if you go to a Blu-Ray on there, it’ll say $29.99 or something and it’ll be crossed out, and then there’s the regular price underneath (let’s say $22.99 or whatever, if it’s a new release). So when I say ‘Never Pay Full Price’ I mean that price, not the crossed out one which nobody ever pays. Always pay way less than the price a thing typically goes for. The logic of this being that if you always buy a movie for, or even less, than what you can resell it for, your collection will always pay for itself, or even turn a profit.

Now, this isn’t always possible. Some stuff, you just gotta bite the bullet on. For instance, Twilight Time, who do limited-to-3000-copies Blu-Ray runs of some great stuff (Hard Times, Body Double, The Driver) which cost a set price of $29.95, plus shipping. But the beauty of this is, since they’re limited to 3000, once there’s no more, they sell for way more eBay. Sometimes like upwards of $200. But don’t be that guy, don’t buy limited run shit just to turn it around on eBay. At least, don’t make a habit of it. For the most part, simply treat yourself to a full priced thing that you want after having bought a bunch of other stuff that’s way cheaper than what you could resell them for. That $29.95 plus shipping might sound like a lot, but if you’ve bought a bunch of blu-rays at like $4.99 each and now they go for like $9.99, resell those, and the $34.95 is covered.

Reselling is the key here. Not just buying and buying and buying. You resell the movies you don’t want anymore in order to pay for the ones you do want. Your collection should be an ever-evolving, ever-changing organism that never grows too big. Sure, there’ll be movies you’re all sentimental about and will never sell—that’s your ‘core’. But said core should always be surrounded by a thick layer of fat of movies you’re cool with watching a few times and then getting rid of.

Reselling in trade-in stores is for the birds. You’ll get damn near nothing. The exception being that sometimes stores like Best Buy will have special trade-in offers where you can get $5 off a new movie if you trade in an old one, regardless of whether the old one is even worth $5. So that’s a good way to get rid of movies nobody wants. But in general, any used movie store ain’t gonna give you much. Instead, sell online.

Start up an eBay account if you don’t have one already, and sell on there and Half.com. Also sell on Amazon Marketplace. See what a movie is going for on all three places, and list it on the one where it’s going for the most. Simple as that. When it sells (this can take a while sometimes, but it’ll happen) buy some generic bubble mailers, and mail your shit promptly. It won’t take long to build up great feedback, and when you have that, your shit will sell more frequently. Make sure to read the fine print though, and see how much commission these sites take. Some reimburse shipping cost, which is nice. Factor in all of that, including bubble mailer cost, when figuring out how much you can make from reselling a thing. Often you’ll simply break even, but if you know how to spot trends, you can make a profit—sometimes a huge one.

OOP stands for Out Of Print. This shoots the price of an item up like crazy. The most common stuff to go OOP is TV box sets. If you can spot ones that are likely to go OOP, you can turn a big profit. Keep an eye out for shows that have a rabid but small fan base. A good example: Gerry Anderson’s shows. There was a time you could get the Stingray box set for like $12.99. I bought it back then, predicting it would go OOP just like a lot of other A&E niche titles have. I was right, and I turned it around a year or two later for over $100. I’ve done this with many other titles. Unlike buying limited run Twilight Time stuff solely to resell it, this isn’t evil, because you’re not screwing people who want something out of having it. The day a Twilight Time release goes for sale, resellers flood the site buying the title and sometimes it sells out completely in like an hour or two. Then they go and sell the shit on eBay to the people who generally wanted it, for a jacked up price. That’s fucked up. Same thing happens with concert tickets. People are dicks.

Track The Lowest Prices On Stuff

I’m a member of the Something Awful forums, and there’s a great thread on there where people post about DVD and Blu-Ray price drops on sites. That’s how I find about most deals. But if you don’t feel like paying $10 to become a member of the forums, you can always just use sites like DealCatcher or Blu-Ray.com. For all I know, there are better ones out there than those two, but they’re pretty good. If you have any suggestions of better sites for deals, leave them in the comments.

The best time of the year for online deals tends to be from November to Christmas, so treat yourself to gifts that literally keep on giving, since you can resell them in like six months or whatever.

Keep Your Shit In Great Condition

Reselling your shit in six months or so doesn’t work if you’re a slob with your shit. You want to make sure you can always get the best price possible, and that’s not gonna happen if your discs are covered in smudges and scratches, and your boxes are all dinged up. Hold the disc properly, put it in the machine, and put it back in the box when not watching it. Pretty straight forward. Don’t leave your discs laying about, an don’t toss the box around. Just be responsible, dang it. And don’t smoke. If you can write ‘non-smoking home’ in your item description, that’s a great selling point. Nobody likes ordering a used DVD online and getting it in the mail and it smells like cigarette butts. Smokers who are collectors baffle me. That shit fucks the resale value of damn near any collectible.

If you become a member at Barnes & Noble, you get 10% off any item. You also get coupons in your inbox here and there for an extra 20% off. Usually this coupon will coincide with at least a few days of Barnes & Noble’s 50% off Criterion sales, which means you can get Criterion titles for 80% off. Mind you, that’s 80% off of MSRP, but that’s still an insanely good price. It basically ensures that any Criterion you buy, you can resell for more than you paid for it. Plus, Criterion titles tend to go OOP here and there as their rights to certain titles lapse.

I don’t know where you live, so I can’t give specific advice here, but you know what I mean. There’s always somewhere local to buy things for amounts that haven’t been chosen based on online prices or whatever. And where there’s that, there’s deals to be had. It’s such a fucking rush to find a DVD in a used bin for $5 that you know goes for like $50 online.

Apply All Of This Advice To Collecting Other Things