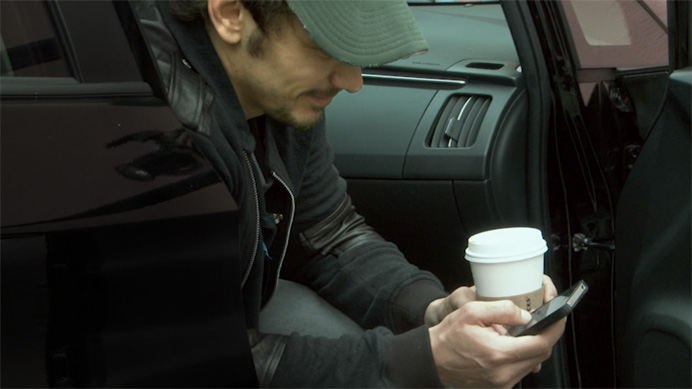 There is no greater summation of this film than in this seemingly throwaway line, which Franco barely ekes out without smirking, in the scene from which I’ve grabbed the screenshot above. Within his delivery of it lies an acknowledgment of its hyperbolic untruthfulness, as well as its inherent truth—what he means is, ‘yes, of course scripts are important, but at the same time, they’re just scripts, and their being there or not being there isn’t worth worrying about’. And his mouth lets us know that he knows we can’t help but wondering anyway, and that this is the right reaction.

I don’t know exactly how this movie was made. I don’t know how much was scripted or not scripted, how much the actors knew or didn’t know, how much of the film was planned or shaped in the moment. And I don’t want to know—not knowing is the knowing, because this film, more than anything, is about being uncomfortable. In fact, it’s an exploration of uncomfortability so multifaceted and fascinating that it transcends both what it was marketed as (a Queer Cinema throwback) and what it truly is (a tongue-in-cheek pseudo-doc).

The premise of this movie turned me off from it for a while: James Franco re-imagining the lost, ‘too explicit’ footage from William Friedkin’s Cruising. It just sounded so goddamn stupid—a useless, college art experiment, only giving credence to those who see him as over-achieving yet ultimately inept. Turns out, the premise being dumb is the whole goddamn point.

It’s hard to write much about this film, because not knowing what the hell you’re watching is a major part of the ride. It may seem as though I’ve given too much of it away already, but trust me, I have not—or, in keeping with the theme of the film, trust me or don’t trust me. Either is just fine.