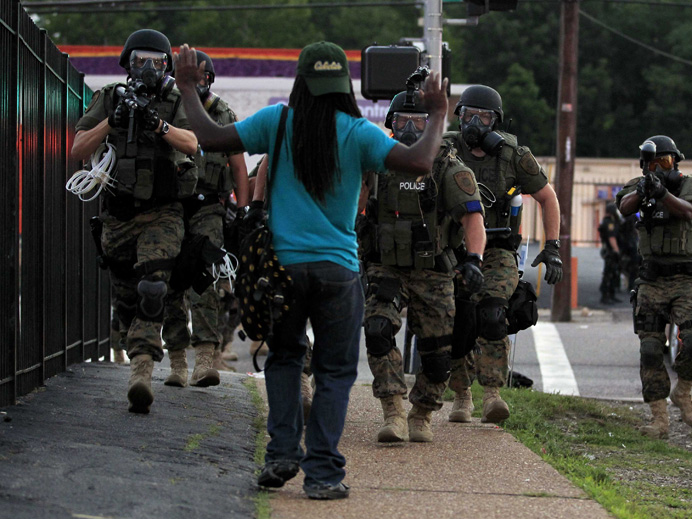 “The community that denies to a portion of its members their plain rights under the law has severed the only safe bond of social order and prosperity. The evil works from a bad center both ways. It demoralizes those who practice it and destroys the faith of those who suffer by it in the efficiency of the law as a safe protector.” – Benjamin Harrison, 1889

Everyone’s first response to Let’s Be Cops is to wince at the timing—a film about frat boy cop antics released the week a town is besieged by a police paramilitia. But really, when you get right down to it, when would be good timing here? What is this movie’s best case scenario? America’s toughest week in a long time is really the only time this 21 Jump Street ripoff has anything more to offer us than tepid chuckles.

Wayans and Johnson are strong comic performers, and they have an easy chemistry (albeit not as strong or as easy as Hill and Tatum) but their sensibilities here, like in their show New Girl, run to the thoughtless. ‘Thoughtless’ is not the same thing as ‘crass’ or ‘dumb’ or ‘silly’—all of which have their place in comedy. Thoughtlessness, unlike the others, is as stifling in comedy as it is in life. In the case of New Girl, thoughtlessness takes the form of shallowness, robbing it of the personal ridiculousness of an Always Sunny or a 30 Rock—the whole thing feels like an act of pure salesmanship, a wallow in a drained well of a formula. Let’s Be Cops wallows as well—it never reflects, it never strives, it never questions itself or even thinks about itself, and because of that, we can see in it something instinctual, sincere, and sinister at the core of our culture.

The film is about two losers, one ultra-aggressive and one ultra-passive, who dress up like law officers for a costume party and decide to keep pretending, and aturally, they eventually run afoul of the Russian mob. Jake Johnson plays Ryan, our instigator, a washed-up football player who seems to get a little more unhinged each scene. Damon Wayans, Jr. plays his roommate Justin, a beta-male working on an ultra-realistic police simulator video game called Patrolman. “Don’t think of it as a game,” he tells his coworkers, “Think of it as a real experience. You are a cop.” That line, spoken over footage of Jake Johnson in a firefight, is supposed to reflect on the two of them pretending to be cops—they are cops because they’re in a firefight.

“A uniform is something you earn,” a real cop snarls at our fakers at one point, prompting the duo to find a way to earn that position. As the film goes on, we learn that being a cop is not something you earn through civil service or outreach with your community, but through merely shooting bad guys to death—all it takes is a trigger finger and a badge to be police here. The expectations of wearing the uniform are pretty much a seventh grader’s view of bravery: running into fire and dropping one-liners. The film’s awful timing is serendipitous then, a way to offer psychological perspective—Let’s Be Cops is about civilians drunk on power when they dress up like police; Ferguson is about police drunk on power when they dress up like soldiers.

The first half of the film is actually sort of interesting. We watch these two exorcise their power fantasies by hassling petty criminals and flexing in their uniforms. This is the same dark territory Seth Rogen’s underrated Observe & Report goes into, and it’s a naturally grim, uncomfortable realm, the realm of male fantasy and frustrated violence. Touchy stuff, but it can be very funny. One of my favorite little jokes is when Ryan scoops up a handful of change from a car he’s searching—“Laundry money!”. But Let’s Be Cops is a movie frightened by its own premise, so it backs away from this by changing the stakes and adding a convenient, implausible, and well-worn boogeyman: The Mafia.

Just as New Girl is the usual sitcom premise, Let’s Be Cops is the usual cop story: a rogue cop or two get to the bottom of a case and go up against a group of foreigners even more heavily armored than the police themselves. It’s a common and deeply satisfying plot line, the basis of classics and near-classics from The French Connection to Lethal Weapon to End of Watch. It’s exactly as beautiful, American, and utterly bullshit as the cowboy myth from which it sprang. By the 1960s, the western had stopped being able to peddle its myth seriously, and I think it’s about time the cop genre faces up to the basic dishonesty of its central premise. I’m not going to get into the figures about how our cops are powerfully armored and Constitutionally dubious—the information is available, and you either know it by now or you don’t care. I’ll simply say that we have a uniform problem in America right now, and if a film like Let’s Be Cops is revealing our cultural fantasies, then it’s worth examining just what fantasies it’s presenting.

The idea of the warrior cop going in against an armed-to-the-teeth foreign gang is fun, and it’s hurting us—and the more fun it is, the more it will hurt us. We accept it as a trope in a film like End of Watch because it’s all so exciting and beautifully put together, but something as flaccid as Let’s Be Cops gives us a chance to examine that same story in the cold light of day.

So let me propose an alternative narrative, one closer to reality:

An impressionable young man attracted to authority joins a police force where he’s given military-grade weaponry, a code of silence, and arrest quotas. He is taught by the mass media and his superiors to think of himself as a warrior and his suspects as insurgents. Dressed like a soldier, eyes lost behind sunglasses, he shoots an unarmed man during a routine arrest. There are no consequences.

Look, it’s always hard to admit when something you like is bad for you, but at a certain point, most of us stopped pretending tomato sauce meant pizza was a health food. Maybe it’s time to admit the same about the cop story we love to tell ourselves. In fact, the most sinister part about a movie like this is that it’s all so common by now that I felt neutral about the whole thing—that is until I came home to watch American police officers point guns at Amnesty International observers.

Elsewhere in theaters, John Michael McDonagh’s Calvary is doing a powerful job examining what happens when people in uniform betray our trust. “We’ve heard too much about sin,” it tells us, “and not enough about virtue.”

Let’s Be Cops has a few good gags, a fine cast, a catchy soundtrack, and decent enough camerawork—but it’s missing a heart, a brain, and a soul.

Zero stars out of Five.