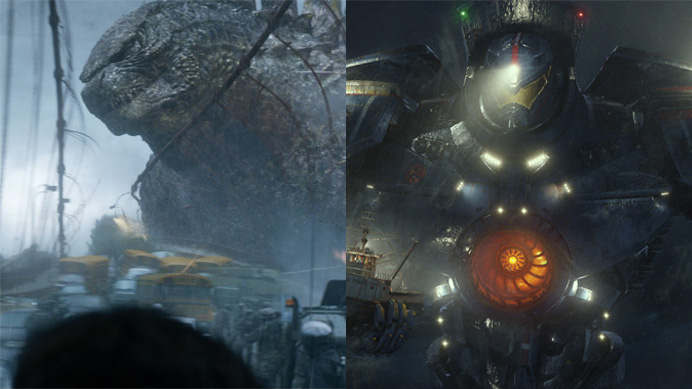 In Pacific Rim, except for a single vague line about how pollution might be why we’re being invaded, the Kaiju don’t really represent anything. Giant monster movies are well-revered as a genre because they tend to make good use of themes (the term ‘monster’ is derived from the word ‘demonstrate’). Giving the creatures a theme and good characterization—making them demonstrate something—is why they stand out so well. Rim defenders claim the film is ‘just mindless summer fun’, often making a joking comparison to Robot Jox (inexplicably a cultural punchline—it’s about the Cold War and it’s absolutely brilliant). What they see as escapism, I see as a failure—the kaiju are just generic enemies to fight and be scared of, robbing them of any symbolic weight and making goings on just plain not interesting. Worse, it takes a genre’s typically important questions about humanity and reduces those questions to one: ‘Hey, what if there were monsters or whatever?’

In Godzilla, the MUTOs and Godzilla tie directly into the themes laid down in the human side of the story—mainly, the idea of ‘family’, how it is defined, and how it should be restructured for the world to be better. Instead of ‘bad monsters’ and ‘good monsters’, a la Rim (actual tagline: “To destroy monsters, we created monsters”) the MUTOs have a fairly simple and understandable goal: survival. They’re not outrightly evil—they’re simply trying to preserve their own little family, and they even show each other affection in some scenes. They represent the violence inherent to the idea of putting family first—in all human conflicts, aren’t we all merely trying to protect the tiny portion of people we happen to know, killing those we happen not to? The MUTOs’ only negative trait is that their family’s proliferation will harm or possibly destroy humanity—just like fighting to protect my own family above all else intrinsically puts yours in danger. Love and honor can be violent and selfish. How many people in the world would love to try and make the world a better place, but ‘have kids to feed’? Posing this attitude as monsters that directly threaten us illustrates that perhaps this very selfish self-preservation is the central source of human conflicts.

Godzilla represents the solution to this—a radical and almost self-destructive violence that stands for the eradication of the ‘nuclear’ family in order to truly put things right. His arrival signals death and destruction, but  is ultimately there to target a problem that threatens everything. This is not a new theme for the Godzilla series—it is one of the themes of Mothra, and the 90’s Gamera films, which I would recommend to everyone. It is also one of the central themes of the New Testament, wherein Christ “came to set the world on fire”, and spoke often of the necessity of hating one’s family—even one’s self—in order to properly fight for justice. This message is not one of literal hatred, or even dislike—it is about rebelling against a preconceived order so that you can find a better one.

Godzilla enters the film right after Bryan Cranston exits it—they are two aspects of the same idea. Cranston’s character is less interested in protecting his family—or even his own life—than he is about finding the Truth. His son ultimately learns this lesson, and spends his time trying to do something about the crisis and volunteering himself back into helping the military instead of fleeing and joining up with his family in safety. The point here is that if you encounter a truly serious problem with the world, you should be willing to die trying to put it right, rather than merely fighting to protect your personal bloodline. By the end of the film, he is a mini-Godzilla, slightly estranged from his wife and son, but connected to all wives, all sons, and the shared struggle we all face together—he becomes, effectively, a follower in Christ.

This is a nice reversal of the logic of Pacific Rim. Even though the monsters of Rim are a response to human industrialization, humanity says ‘Don’t worry guys, we can build our way out of this!’ and fights for things to remain exactly as they are. Humanity changes just enough that it doesn’t have to really change at all—and worse, it changes by creating monsters equivalent to the ones menacing them. In this way, the film is almost conducive to being read as satire, but judging from the overwhelming fan response of ‘you’re over-thinking it’, I do not see this to be the intended case.

The philosopher Georg Hegel once claimed that in the most abject, horrible outside, one can glimpse one’s own ideas in a new form—what you imagine as the enemy of your society tells you about how you and your society already function in the first place. Anti-semitism, for example, is defined entirely by its perceived enemies. Where Pacific Rim fails is that it pitches the kaiju as ‘just’ alien monsters trying to destroy us. Godzilla’s brilliance lies in that it doesn’t ‘just’ have cool monsters that fight—the fight means something. The fight, for all its effects, is inherently real, and important.

In my piece on zombie films, I touched on the concept of ‘living in the mall’—becoming so attached to the world you live in that you become resistant to the idea of changing it, even for the better. Godzilla is shown in this movie to be such an impossibly massive figure that simply getting out of the water displaces a tidal wave and shatters the bubble-world of a nearby casino—the images of the monsters on the screen above the patrons’ heads finally ‘escape’ the world of television, and this completely shatters their reality. Hundreds of people drown. It is easy to imagine someone formulating a complaint about this: “Godzilla is a bad guy because he kills a bunch of gamblers while trying to save the world!” Perhaps the better thing to ask is if ‘The Casino’ is really the thing worth protecting in the first place.

In this film, Godzilla destroys ‘The Mall’. Maybe those that survive this traumatic encounter will find a way to build a better world in its ruins, one that will no longer awaken, or necessitate, the forces of destruction.