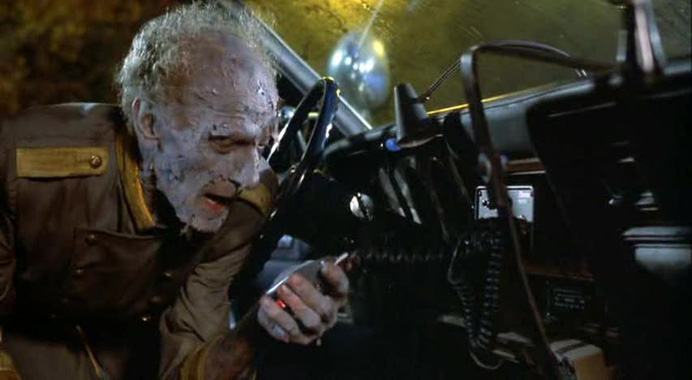 I really like zombie films. Not because I find the creatures interesting, but because these films tend to be open and blunt about their ideas. The first three of Romero’s Dead movies are not really about the zombies themselves—they’re about how, in many ways, we’re zombies already. Dawn of the Dead’s shots of zombies milling around in a shopping mall is one of the most haunting things I have ever seen.

What I don’t like, however, is a particular brand of zombie fan—the ones who obsess over the idea of the zombies themselves, like they’re some kind of mathematical puzzle that can be ‘solved’. This leads to the creation and popularization of books like The Zombie Survival Guide. This completely misses the point of the films these fans supposedly like, and has led to a school of film viewership I will hereby refer to as ‘Tactical Realism’.

Tactical realism doesn’t just apply to zombie films—treating any film as a simulation of some theoretical ‘real’ event is always stupid in any case, because films are, necessarily, not real. The symbolic weight of the dead rising is lost when it’s covered by a web of Bare Facts, like ‘shoot for the head’ or ‘don’t be a hero’ (Zombieland excellently satirized this mindset through its dumb, sociopathic main character with no attachment to humanity).

These fans regularly ignore the artistic qualities of the film in order to do this. Almost everything filmic about films—cinematography, symbolism, and even characters’ emotional states are discarded as unimportant.   Scenes like the one in the Dawn of the Dead remake, where a woman risks her life to save a poor animal, confound these filmgoers. It’s amazing how sociopathic people become when confronted with an act as simple as sympathy.

With this in mind, my favourite zombie film, and the ultimate cure for this crappy subculture, is a movie called Return of the Living Dead. It’s written and directed by Dan O’Bannon, who also wrote Alien. The film takes Romero’s films and follows them to their logical conclusions, doing them better than their originator ever did (or ever has—I’m looking at you, Diary of the Dead).

In Return, zombie-itis is explicitly caused by a military-developed chemical known as Trioxin, of which there was an accidental outbreak. This outbreak, according to characters in the film, is what inspired Romero to make Night of the Living Dead in the first place. This should make the zombies surprisingly easy to deal with, right? All the characters have seen the movie ‘inspired by’ the events, and know all the tricks—go for the brain, trick them into shuffling somewhere out of the way in order to make safe zones, and so on. A tactical realist’s dream!

So, they go for the brain.

This is where the film starts to fuck with the tactical realists in the audience. The zombies cannot die and will not stop, ever. If you cut them into pieces the pieces go for you. If you try to burn the pieces, you spread the poison that created them out into the atmosphere, and into the rain. What if it rains on the graveyard next door? The film is a horror-comedy, and both these elements are always hand-in-hand—it’s hilarious watching idiots bumble about making things worse, thinking life works like in a movie they saw, but the concept of confronting an enemy that defies your understanding is horrifying.

People take it for granted nowadays that zombies eat brains. Even the most blasphemous of blasphemies, the Zombie Survival Guide, makes reference to this ‘fact’. Well, it wasn’t one until this movie came out. Return of the Living Dead invented brain eating. The zombies are even given a motive for doing so: eating brains is a temporary cure for the pain of being dead. Being conscious that you are dead and rotting is horrifyingly painful, and eating living people is a distraction from that. The zombies are tactical realists themselves, in this way—all they want to do is save themselves.

The theme of attempting to distract oneself from pain or terror runs deeply through the film. Characters have ‘ironic’, postmodern names like Trash and Suicide, and talk about how much they enjoy dancing in graveyards and would love to be eaten alive. This is revealed to be a front—they’re trying to squelch their fear of the inevitable by appearing to embrace it. It is only once they face the fact that dying still scares them that they really start to be alive at all. This shines a mirror on the tactical realists in the audience—when you take the zombies ‘seriously’, criticizing a film if the main characters make ‘mistakes’ that don’t go with the optimal survival method, isn’t that really just a strategy to avoid engaging with the fear and terror being illustrated on the screen? Ironically, despite their knowing of all the ‘tricks to survival’, they’re probably the one group of people I’d least want to hang around if the dead ever really started rising. And if I was a zombie, I’d target those guys out of spite.

One of the best scenes in the film is when two cops arrive on the scene to try to make sense of what’s going on, and are quickly consumed by the horde. Then, a zombie enters the cop car and gets on the radio, telling the operator to send more cops. It’s a fantastic message: the zombie horde is a horrifying black hole of violence that absorbs all attempts to contain it—and dares you to try. All attempts to do so only feed the madness and make you more like them, either by figuratively changing you into an amoral tactical realist or literally killing and resurrecting you as one of them. It’s another version of an idea O’Bannon also expressed in Alien, wherein the evil corporation wanted to study the alien, adopt its strategies, and become better killing machines, whereas the real goal should be to become less like them.

Don’t we want to be less like the zombies, and transcend bare survival instinct? Remember, this film came out right at the end of the Cold War era, where the tactical realist attitude of having more nukes than the enemy ‘just in case’ almost got the entire world killed. If we all treated each other with a little more humanity, things would be better. In this movie, the military created the zombies. Which is why, fittingly, it ends with the military making a last-ditch attempt to end the outbreak by using nuclear arms. The zombies are incinerated, and for a moment, you might be convinced that everything might be okay—but then, in a scene that manages to be terrifying in spite of its actual content, it starts raining.

The zombies win, because the methods applied to dealing with them can only ever make it worse. The film even replays key scenes from the film over the end credits to hammer this home. You can never send enough cops. The era of man is over, and we’re fucked. Any honest sequel to this film would take place in a wasteland with no humans left at all, just a seething mass of immortal, rotting humans in constant pain. The film imparts a grim warning—not about how to effectively deal with a trioxin zombie invasion, that would be asinine—but about losing sight of what it means to be human and playing the zombies’ game. It also has a kickin’ rad soundtrack—the film’s theme song, composed by Francis Haines, is simply the best thing. I listen to it all the time.

Watch Return of the Living Dead, and embrace your humanity.

One thought on “The Movie Lied: Tactical Realism and ‘The Return of the Living Dead’”