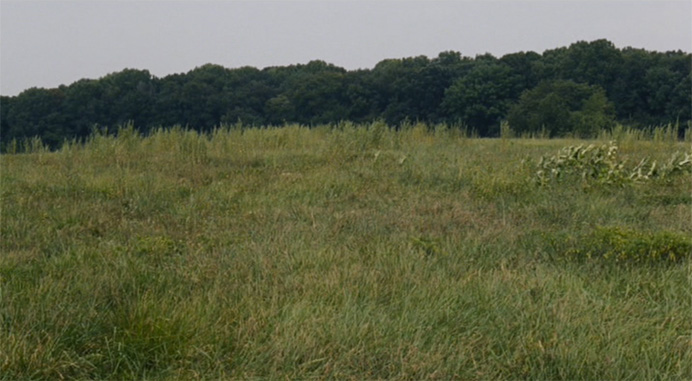 There exists a phenomenon in the arts where an artist, or a given work, is so bursting with subtle, glorious aspects that only fellow artists in the field or truly knowledgable critics can pick up on that when ‘civilians’ check it out, they see it as simply empty and stupid and boring. Their untrained eyes are so fixed on the surface elements that they miss the masterful sleights of hand underneath. This happened with The Happening. What’s unique here though is that filmmakers, for some reason, have yet to jump in and defend it and help civilians understand its wonderful aspects—probably because, for the most part, they themselves are just as clueless.

This is unfortunate, but not wholly uncommon. It seems that sometimes it can take decades for filmmakers and critics to come out and throw their support behind an overlooked work. (Recently, Heaven’s Gate and Ishtar have been given deservedly friendlier appraisals.) And in the case of genre fare, sometimes it can take much, much longer. Well, fuck that shit. The Happening deserves better.

The cinematography in particular is just phenomenal. Tak Fujimoto—one of the greatest DP’s of all time—is firing on all cylinders here. You might not know him by name, but you definitely know his work: Badlands, Silence of the Lambs, Ferris Bueller, Pretty in Pink, Something Wild, That Thing You Do, The Sixth Sense, Signs—the list goes on. He’s one of the best DP’s as far as visual storytelling is concerned. His shots always serve the story. They’re beautiful, but they don’t call attention to themselves—they simply envelop you and carry you along. Sure, you can learn a lot about filmmaking by watching Hitchcock and Kubrick and all that, but you can learn lightyears more on a practical level by watching, for instance, the ‘Try a Little Tenderness’ Duckie scene in Pretty in Pink. Really pay attention to the setups and lighting and composition and camera moves in that scene. It’s perfection.

But back to The Happening. What makes The Happening so well-shot? I’ll tell you what, watch the damn thing with the sound off. No subtitles, even. The story is told perfectly with just the visuals. Sure, it might be a little boring not knowing what people are talking about, but you’ll see what I mean. And yes, this works with plenty of films, not just this one, but this one in particular is damn near dreamlike. There’s a poetic rhythm to the awful things that happen, and of course, that has to do with the editing, but less so than you may think. Tak’s sequences damn near edit themselves. This movie is the best example of pure, minimalist, practical cinematography I’ve seen in many years.

Of course, it’s not just Tak figuring out these sequences. Shyamalan is a phenomenal storyboarder. (For proof, check out the bonus features on The Sixth Sense.) He and Tak, I believe, are a match made in heaven. Although all of Shyamalan’s movies are gorgeous to look at (except, of course, The Last Airbender) the movies they’ve done together have been the best looking. And this one is their most beautiful. Ironic, given the fact that it’s a b-movie.

Yes, this is a b-movie. The premise is silly, the characters are silly. But that’s a stylistic choice. Not all b-moves are the way they are out of incompetence. Some are the way they are because the director just plain likes the sort of vibe it creates. (In other words, no Shyamalan did not ‘forget how to write and direct’.) If that sort of B vibe not your thing, fine. But it’s hypocritical to pick on Shyamalan for experimenting with hammy line deliveries and silliness and then go and worship David Lynch when he does the same goddamn thing. The internet is full of that, because Lynch has cred amongst film geeks, and is thought of as a serious artist, whereas Shyamalan is thought of as a joke for some reason.

On the subject of jokes, I should mention, Shyamalan is funny as shit. This movie is funny as shit. People like to laugh ‘at’ it, not at all realizing that Shyamalan is laughing and smiling at all the same parts. Marky Mark doesn’t ‘suck’ in this movie. He’s funnier here than he is in all the comedies he did after this. (And, he probably got all those movies because of his role in this.) Zooey is funny too. Way funnier here than on The New Girl or whatever. Here, the two of them are free of that awful winking awareness that bogs down their comedic performances.

But really, my favorite aspect of this film of all is the fact that it takes something completely innocent and makes it threatening—and does so with very little. Trees, grass, flowers, and wind are made to be scary, just by putting the thought in our heads and then shooting them straight on. No special effects necessary. We need only to see them as they are, and we accept that they are evil, because that’s the premise. It’s like that old thing about showing a person a photo and saying they are a hero that saved kids from a burning building, and they’re all ‘oh definitely, I can see it in his eyes’ or whatever, and then showing someone else the exact same picture and saying they are a murderer, and that person says the same shit, that they can tell just by how he looks. In reality, the guy is neither—our brains connect the dots for us. I love that kinda shit. Sure, it’s fun to see Sam Raimi make a tree blatantly menacing, but it’s also fun to just look at a tree the way it is in nature, and be told it is evil, even though it’s just a tree, standing there, and our minds just color it that way. That’s gorgeous. And perhaps that’s really what bothers a lot of people about The Happening—it makes them uncomfortable, how effective Shyamalan is with so little. Audiences hate themselves for being in suspense during, for instance, the scene where Marky Mark talks to a goddamn plant, and then take their hate out on the film, because they are embarrassed a ‘bad movie’ made them feel something real.

One thought on “The Happening: A Filmmaker’s Film”