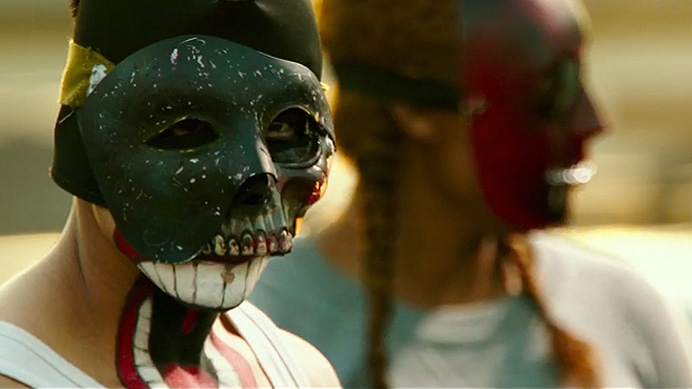 I want to preface this review by saying that when I went to see The Purge: Anarchy, the girl in front of me on the line for the concession stand had a picture of Drake in her wallet. This has no bearing on the rest of my review or the film; it’s just something I had to tell the world.

On to the movie.

The Purge: Anarchy checks us back into a world where crime is at an all-time low and American unemployment is “under 5%.” The price of this utopia (which, come to think of it, is pretty much just the Clinton years, meaning we now view the prosperity of 1990s as honest-to-god science fiction) is that each year, for 12 hours on the vernal equinox, all crime is legal. According to the ads anyway—in the film itself there’s a whole subsection of pretty witty clauses banning high explosives and exempting government officials. Even The Purge has its red tape.

It’s a ridiculous premise, I know, but so was Shirley Jackson’s The Lottery. The original The Purge got a lot of well-deserved flak, but it was not a good movie not because the concept was bad but because it fundamentally misunderstood what works about it. It was a dumber, sloppier Straw Dogs with idiotic scripting (“We are finely dressed guys and gals, now surrender the homeless pig.”).

The idea of The Purge works, if at all, for grand and ridiculous reasons. You immediately see a dozen films in your head—We Bought a Zoo on Purge Night, Ocean’s 11 on Purge Night, Get Him to the Greek on Purge Night, The Office’s Annual Purge Night Special—and they all demand you get out there and see what it’s all about. It’s too richly insane an idea to cloister; a filmmaker can’t tell us the streets are running red and expect us to be content crawling around a McMansion in the dark.

The new film gets it. It follows four regular people who, for reasons of their own, all end up being shepherded through downtown LA by a gravelly badass who’s not quite The Punisher, but close enough that I’m sure Marvel’s legal team had a few meetings about him. Director James DeMonaco wisely ditches the home invasion horror trappings of the first in favor of in-the-streets survival action, and it’s all throwbacks from there on. The concept itself is pure 1960s/1970s science fiction—think of films like Planet of the Apes, Death Race 2000, and Rollerball, when filmmakers would hammer an absurd concept into a bitter indictment of the US government against the backdrop of a world splitting down the middle in class warfare.

Visually and structurally, it’s as ‘80s as can be—the deep vibrant colors and plot mechanics are as John Carpenter as all get out. The beauty of making a film about one night is that the first and last scenes all take place at magic hour, and some of the best stuff in the film are haunting, orange-tinged shots of citizens shuttering their windows or sharpening their knives while the sun winks away. The camerawork never disappoints—it’s sumptuous in the fading daylight, and crisp in the nighttime stuff. There’s a strong use of space—unrelated murders and assaults litter the screen with an eerie irregularity. There’s an immediate and lasting sense of dread, helped by the stunning makeup and production design which make the many villainous gangs as evocative as those of The Warriors. There’s a nice forward energy, too—we get to see a cross-section of the city, shoving through various disparate situations and locations so that things are always a little off-kilter.

That said, a lot of it doesn’t play. There’s a subplot about a couple who are splitting up that just never, not for a second, managed to interest me. And at a few moments, it gets tripped up in unearned sentimentality, a problem that takes a lot of the bite out of the ending. Worst of all, the dialogue commits that awful and all-too-common sin of redundancy—at one point, we see five people with guns and night-vision goggles burst into a room. “They’re here,” one of our protagonists whispers for the benefit of the audience. “They’re hunting us.”

It’s never quite a smart film, but like the angry ‘70s science fiction films it learned from, it succeeds when it’s at its most audacious—by staring the madness of its idea in the face and up-playing the absurdity, it’s closer in spirit to the original Planet of the Apes than Dawn of the Planet of the Apes is. The satire is, for the most part, pretty generic, but the film goes at its targets so constantly furiously that some of the attacks have a surprising heft—there’s a moment where you learn what the homeless are up to that gives a pretty visceral sting, and the different philosophies of the various gangs have a raw edge. The idea of The Purge doesn’t inherently have a hell of a lot to say about America, and this film certainly not any great exposé on our violence problem, but inside of all the silliness are a few small kernels of honesty about the unbalance at the center of this country. It gets by on passion rather than intelligence, and perhaps that’s enough.

For its flaws, The Purge: Anarchy is a beautifully shot, passionate, and entertaining work. When held up alongside its horror movie predecessor, I’m struck by the consistently creative space modern action films are working in, as opposed to the dishearteningly tedious and self-sabotaging space modern horror seems lost in.