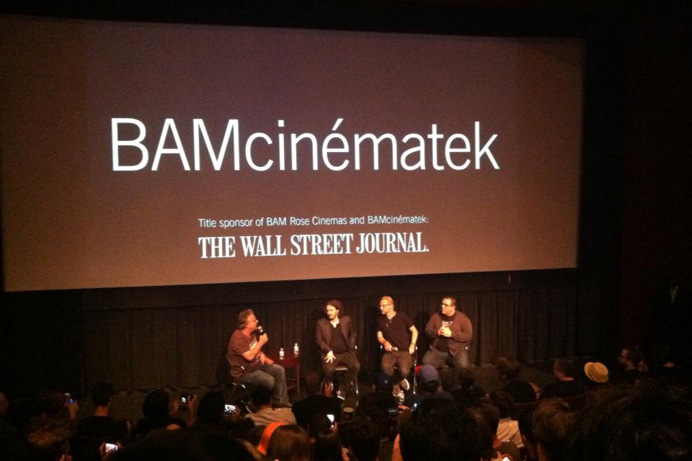 It’s a tough thing to come back to your hometown after years of avoidance. Revisiting streets and buildings you once knew so well almost makes you feel like you’re walking through your own personal shrine to your past. One might even categorize it as an almost otherworldly experience.

But the nostalgia only lasts so long, as you slowly realize that really nothing has stayed the same: a Starbucks has replaced your local coffee shop, the faces you once knew have been replaced with haggard and older models, the school bully who made your life hell doesn’t look twice at you, and the punks on the corner have blue-ink blood and don’t back down even after you’ve knocked their heads off.

The World’s End is Edgar Wright and Simon Pegg’s final installment in what they call the Three Flavours Cornetto trilogy, which consists of Shaun of the Dead (a romantic comedy with zombies), Hot Fuzz (an action comedy whodunit) and now, The World’s End (a comedy about adulthood, acceptance, and alien robot space invaders). The other week I had the pleasure of mooching off a friend who won free tickets to a sneak preview at Brooklyn’s own BAM Cinemas. Even better, it included a Q&A with Edgar Wright, Simon Pegg, and Nick Frost in person!

I actually hadn’t been too excited to see The World’s End, due largely to the trailers and TV spots for it. The blaring dance music and one-liners just seemed too Hangover Two-Billion to me. These guys have been working together for many, many years (heck, the first installation in this trilogy alone came out in 2004), and whether you like it or not, sometimes creative teams have an expiration date. (Specifically, I find most burn out around the ten-year mark.) So call me a doubter, but I was a little nervous about it.

However, those feelings quickly vanished as Wright, Pegg and Frost came out on stage to say hello and give a quick introduction. I started to get strange flashbacks of everything they’ve done together (Spaced, anybody? Asylum?) and I realized I was actually really excited to be in a room with these guys. And as the movie started, it was easy to relax and enjoy myself—these guys have still got it. (Thankfully. I was almost feeling a bit old for realizing it’s been 10 years.)

The film is about ex-“cool guy” Gary King (Pegg) trying to round up his old school buddies to come back to their hometown and finish The Golden Mile—an epic twelve bar pub crawl. They reluctantly give in, to Gary’s delight, and they all set off. However, the more pubs they visit, the more they start to feel that something is seriously off—which is where the sci-fi aspect starts to kick in.

Since the movie has only been out a week or so, I promise to keep my review spoiler-free. Which kind of sucks, because the Q&A after the movie was surprisingly insightful! Wright spoke a lot about creeping homogenization, a strong theme in the movie. They also addressed human issues such as addiction, depression, and social pressure. Heck, if you want a Hegelian interpretation of the three movies, go call up Simon Pegg, because he has a whole ex-film major spiel ready to go. But either way, a layman’s viewing of the film will, believe me, be entirely satisfactory as well.

What makes this movie so enjoyable is how well-rounded it is. Every detail has been thoroughly thought out: the snappy camera work, the fantastic use of 90s Britrock (no crappy air horn dance music to be heard), and the fully fleshed out characters. Nothing happens without reason, and foreshadowing is key (again, without giving away too much, a nice little tip from the Q&A was to pay attention to the names of the pubs in regards to what goes on inside of them). For the fight scenes, Wright called up Guillermo Del Toro to ask for a recommendation on a fight coordinator. Bradley Allan, a kung fu stunt man, was then brought in to choreograph the actual cast so that they could do their own stunts. The details in how each individual character fights off invaders—such as Pegg’s character refusing to put down his beer, and Martin Freeman’s character trying to keep his white collar unruffled—really is a joy to watch.  It’s these sorts of choices that really helped to keep the movie believable, which is an impressive feat when we’re talking about a robot alien comedy.

Wright, Frost and Pegg have been partnered together since 1996, and I keep finding myself pleasantly surprised by the quality and consistency of their work. They acheive the perfect balance between one-liners, witty dialogue, and physical comedy. In part, their work is reliant upon source material; Wright, Pegg, and Frost wear their nerdy b-movie influences on their sleeves proudly. But they keep their work from being stale, trendy, reference-based spoof humor by truly building upon it. It’s as much about present day attitude as it is about nostalgic references.

One of the best examples of this is Spaced, Pegg’s television series structured entirely around pop culture references and the true nerd lifestyle. Fan favorite episode “Gone” has the best spoof gun fights you’ll ever see on television, plus one of the best usages of a classic Jurassic Park park quote (still pretty hip for the late 90s, alright?). And this unique comedy structure carried on into their films—with Shaun of the Dead, you needn’t look further than the title to see what I mean. In keeping a level of pop culture-centric self-awareness, while conforming entirely to the institution of performance and film, Wright, Frost and Pegg just completely kill it with new and fun ways to keep the momentum going.

From the Q&A, it was also obvious that Pegg and Frost have fantastic chemistry both on and off screen. A true buddy-comedy movie is one of those rare mystical beasts that simply cannot be faked. Put both of them in a room for an hour and I guarantee you’ll laugh at something. From their banter to their expressions, there is always something very natural and comfortable between the two. I could chalk it up to good acting but I would be lying if I said there wasn’t an extra spark there.

All in all, I found myself laughing out loud, getting into the fight scenes, and just thoroughly enjoying myself throughout this latest installment. They’ve definitely still got it, and if you liked Shaun of the Dead or Hot Fuzz, you will certainly enjoy yourself at The World’s End. And in a lot of ways, it’s a much more adult movie than the previous two. You get the sense that Wright, Pegg and Frost have not only matured, but have also perhaps refined. However, if you’ve just come for some alien ass-kicking, you will definitely not be disappointed.

Be sure to go see it at a time when you can go to the bar immediately once the movie lets out though. It might not be what Wright and Pegg had in mind as a lesson to be learned, but goddamn will you want a pint afterwards.

2 thoughts on “The World’s End: Not The Seth Rogen One, The Other One”